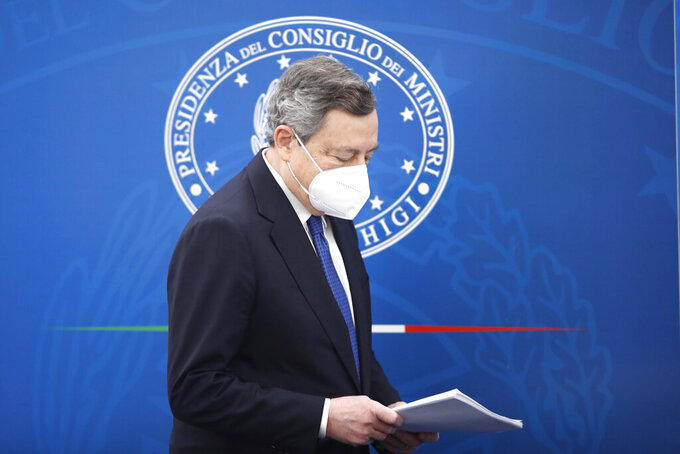 BRUSSELS (AP) — European Union vaccine politics reached a fever pitch Friday with charges of British blackmail and unfair practices among EU members flying about as the bloc frantically sought to ramp up production and impose export controls to stave off another deadly surge in coronavirus infections.

Underscoring the ebbing cross-Channel relations, French Foreign Minister Yves Le Drian highlighted the lopsided exports between the EU and Britain, to where the EU had approved the export of 21 million doses while none have come the other way since vaccinations began in December.

The U.K. has adopted a policy of quickly giving as many people as possible a first dose of vaccine. Le Drian said that meant the country would struggle to get enough doses to administer the required second shots and that the British government was pressuring to get more supplies, at the cost of the EU's vaccination drive.

“You can’t play like this, a bit with blackmail, in the sense that you wanted to vaccinate with the first dose at all costs but you find yourself a little handicapped for the second," Le Drian told French radio network France Info. "It’s not up to Europe to pay the price for this policy.”

Britain denied it faces such a quandary, saying it was confident it had adequate vaccine supplies, but the tension underscored the foul political mood.

The U.K.'s withdrawal from the EU, which was completed on Jan. 1, already had soured relations, And with 47% of Britain's population having received a dose of vaccine, compared to just 14% of the people living in the 27-nation bloc, the vaccine issue stings Brussels badly.

To avoid losing out on vaccines, especially to Britain, EU leaders late Thursday backed a export control system that aims to keep doses in the EU until the company that produces then has fulfilled its delivery contracts to EU nations.

EU leaders accuse British-Swedish firm AstraZeneca, in particular, of putting its contract with the U.K. ahead of promises to the bloc.

Britain points out that it signed a vaccine deal with AstraZeneca first, and has warned the EU against stopping companies from fulfilling their contracts.

"It would be very damaging if countries started to pull up drawbridges and prevent vaccines, medicines or elements of them from crossing international borders, and the U.K. strongly opposes that,” British government minister Robert Jenrick said. The two sides plan to negotiate over the weekend to find common ground.

Within the bloc too, there is no unified stance toward Britain. Italian Prime Minister Mario Draghi, noting a blockade would create tit-for-tat measures, said that “we absolutely should not arrive at this and we won’t arrive at this.”

The EU is not only dealing with problems at its borders, but also internally.

EU leaders failed to settle a fight about the distribution of COVID-19 shots among member nations after Austrian Chancellor Sebastian Kurz said Thursday that some countries were receiving more than their fair share at the cost of others, such as Croatia and Bulgaria.

Most nations say the allegedly shorted EU members lagged in supplies because they made the wrong choice when given the option to pick a vaccine provider. AstraZeneca has been woefully underdelivering.

EU ambassadors are now tasked to bring the two sides closer together. Kurz saw the stalemate as a victory on Friday.

“It was the main topic, and the discussion went on for hours." he said. "At some point, people claimed that Austria was standing alone. I can only tell you that one-third of all member states supported this position very, very, vehemently.”

Italy's Draghi warned Kurz on Friday not to get his hopes up, arguing it wasn’t worth starting over with a new distribution plan just because some countries banked heavily on AstraZeneca vaccines that haven’t been delivered.

“Think about a new model of distribution? No,” he told a press conference. “Germany and we decided no.”

France is convinced EU unity is paramount in the vaccine crisis.

“We are facing a world war of a new kind. We are confronted with Russian and Chinese destabilization attempts trying to exert influence with the help of vaccines,” French President Emmanuel Macron said after Thursday’s summit. "If we want to hold out, we need (vaccine) sovereignty.”

To that end, the EU's vaccine czar, Thierry Breton, is crisscrossing the 27-nation bloc visiting facilities for several manufacturers in an effort to increase the EU's autonomy over the next months.

While visiting a plant near Barcelona, Breton said that 52 factories across the EU are currently churning out vaccines. He says the EU will be producing 2 billion or 3 billion doses by end of year.

“This will make our continent probably the first continent in terms of production by the end of this year, giving us a capacity to produce between 2 to 3 billion doses for us, of course, for our fellow citizens,” Breton said.