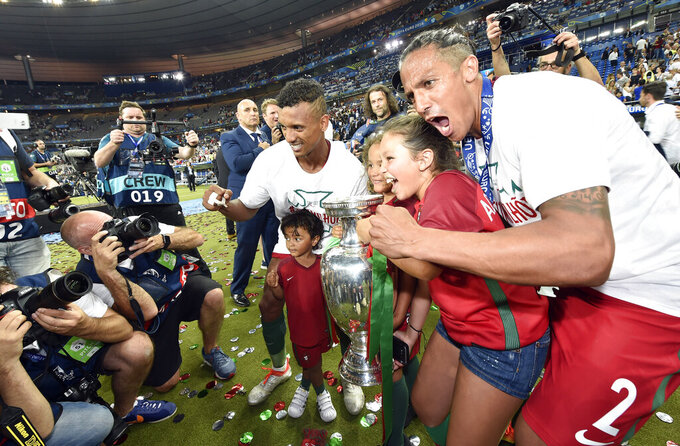 FILE - In this Sunday, July 10, 2016 file photo, Portugal's Bruno Alves, right, and Nani pose for photos with trophy at the end of the Euro 2016 final soccer match between Portugal and France at the Stade de France in Saint-Denis, north of Paris. When it comes time for Brazilians to choose who to watch on the soccer field this month — Neymar or Kylian Mbappé, Lionel Messi or Cristiano Ronaldo — the response might be surprising. Because of an unusual set of circumstances, it will be the European Championship that reaches more viewers in Brazil than the Copa America — even though Brazil is expected to host South American the tournament under a completely different set of unusual circumstances.(AP Photo/Martin Meissner, File)

SAO PAULO (AP) — When it comes time for Brazilians to choose who to watch on the soccer field this month — Neymar or Kylian Mbappé, Lionel Messi or Cristiano Ronaldo — the response might be surprising.

Because of an unusual set of circumstances, it will be the European Championship that reaches more viewers in Brazil than the Copa America — even though Brazil is expected to host South American the tournament under a completely different set of unusual circumstances.

TV Globo, which is accessible to 99.47% of Brazilians, doesn't have the rights to broadcast Copa America this year but has exclusive rights to show Euro 2020 matches on its free channel and digital platforms. The rest of the games will be on the network's pay channel.

Copa America will be on the country's third-most popular broadcaster and distant Globo rival TV SBT.

“If Portugal, France go far there could be a lot of good ratings for Globo, even better than the last time,” said Mauricio Stycer, an analyst who has written several books on the Brazilian TV industry. “There will be fewer watching Copa America than the Euros. If you see SBT figures in Copa Libertadores, which they just took from Globo, it is usually half of what Globo used to get. Copa America can be similar.”

Euro 2020 will be played in several countries around Europe from June 11-July 11, with the semifinals and final at Wembley Stadium in London. Copa America, which had originally been scheduled to be co-hosted by Colombia and Argentina, will instead be played in Brazil from June 13-July 10. Colombia was dropped as co-host in May because of street protests and Argentina was stripped because the country is being hit hard by the coronavirus pandemic.

Globo reached about 80 million viewers when it broadcast four Euro 2012 matches. In the following edition, which was won by Portugal in 2016, it had about 101 million people watching six matches.

This time, Globo will broadcast five matches on its open channel, including four from the knockout stage, plus another seven on digital platforms. In 2012 and 2016, it had to split the rights with another channel, TV Band.

Media analysts predict Globo will have better results this time with possibly 20% more viewers while TV SBT is unlikely to reach as many people throughout all of Copa America — even with Brazil as host.

Kantar Ibope Media, a company that tracks ratings, said SBT reached only 33 million viewers in February for the Copa Libertadores final at the Maracanã Stadium in Rio de Janeiro — a match between Brazilian teams Palmeiras and Santos. It was one of the network's best results in years. One year earlier, Globo broadcast the final between Brazilian club Flamengo and Argentine rival River Plate to nearly 66 million people.

Stycer, however, noted that rivalry matches in the Copa America like Brazil facing Argentina or Uruguay could bring a lot of viewers.

“But it will still be short of what Globo used to get in matches like those and likely less than it will get in a big Euro match Sunday afternoon,” the analyst said. “Brazilian fans aren't crazy about the Euro, but they will watch the most popular channel. And Copa America won't be on this time."

Other South American nations will watch Euro 2020 mostly on cable. In Argentina, it will be on ESPN, while rival TyC Sports shows Copa America. Chileans will have Euro 2020 and the Copa America on Directv.

Historically, Brazilians have an indifferent attitude when it comes to the Copa America, even when the country hosts the tournament like in 2019. But Globo still got decent ratings then, with Kantar Ibope Media saying it had 34 million viewers for that year's final between Brazil and Peru. The semifinal match against Argentina reached 37 million.

“I don't know anyone who believes SBT can beat numbers from previous Copa America editions,” said Amir Somoggi, a partner at marketing company Sports Value. “And there aren't too many interesting matches at Copa America to give them amazing numbers.”

Globo said its interest in Euro 2020 has no relation to losing the contract for Copa America.

“Even though we did not purchase the rights to this edition of Copa America, we will not stop following the Brazilian national team,” the network said in a statement. “Euro 2020 means the certainty of a high quality product to offer the public, with some of the best international players. It is also a great chance to see some of Brazil's main adversaries for the World Cup in Qatar.”

The European Championship is also expected to beat Copa America on cable channels. Globo's popular SporTV channel will broadcast all 51 matches, as it has in most editions over the last two decades.

Those wanting to watch all of the South American tournament will have to subscribe to a recently founded and little known service created by SBT and CONMEBOL. Less than two weeks before Copa America begins, potential viewers still don't know how much the subscription will cost.