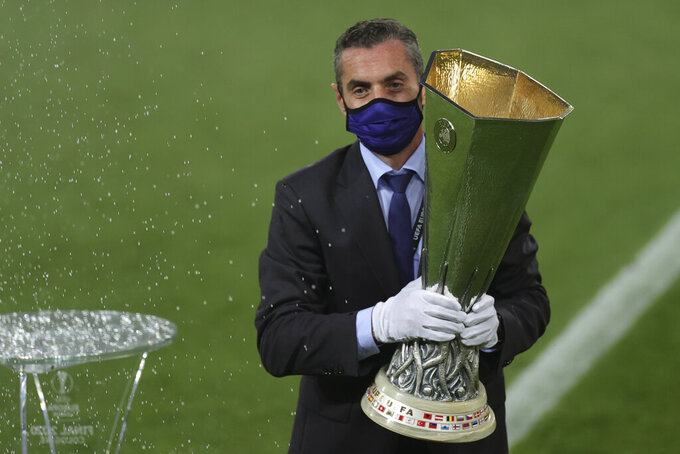 An UEFA official carries the trophy ahead of the Europa League final soccer match between Sevilla and Inter Milan in Cologne, Germany, Friday, Aug. 21, 2020. (Friedemann Vogel/Pool via AP)

Another Europa League qualifier in Estonia was later postponed within hours of the kickoff after players on both teams tested positive.

The tally is now six Champions League or Europa League qualifying games this month to be postponed at least once by virus cases in teams from eastern Europe. UEFA has ordered three teams to forfeit without playing.

In Israel, Maccabi Haifa and Željezničar published statements Thursday to say their game was postponed by the Israeli health ministry.

The Bosnian club said five of its players were found to be positive for the coronavirus on Wednesday after mandatory pre-game tests required for all UEFA-organized games.

Željezničar said the players did not show symptoms and the team was confined to its hotel awaiting a decision by UEFA on how to proceed.

UEFA competition rules during the pandemic give local public authorities power to manage cases and stop games, which are being staged without fans. UEFA then decides when teams will try again to play.

In a later statement, Željezničar said UEFA would make no decision on the game on Thursday and that the team was planning to fly home to Sarajevo on an afternoon flight.

UEFA confirmed the game in Israel was postponed in a brief statement. It gave no details on rescheduling the game or referring a case to its judicial bodies.

In Estonia, the game between Nomme Kalju and Mura of Slovenia was stopped by local authorities and now awaits a make-up date.

Europa League regulations adapted for the pandemic set a Sept. 12 deadline to play the first round of qualifying. Though pairings in the next round will be made on Monday, those games are not scheduled until Sept. 17.

Games affected by clubs' COVID-19 cases were expected in a tightly scheduled qualifying format where UEFA opted for single elimination games instead of two-leg series.

Neutral venues are to be offered when a country cannot host a game but incidents so far involve away teams, traveling from Kosovo, Slovakia and now Bosnia-Herzegovina and Slovenia.

Two clubs removed from the Champions League qualifying rounds -- Slovan Bratislava of Slovakia and Drita of Kosovo -- have appealed against UEFA rulings to the Court of Arbitration for Sport. The court dismissed both clubs' requests for emergency interim decisions.