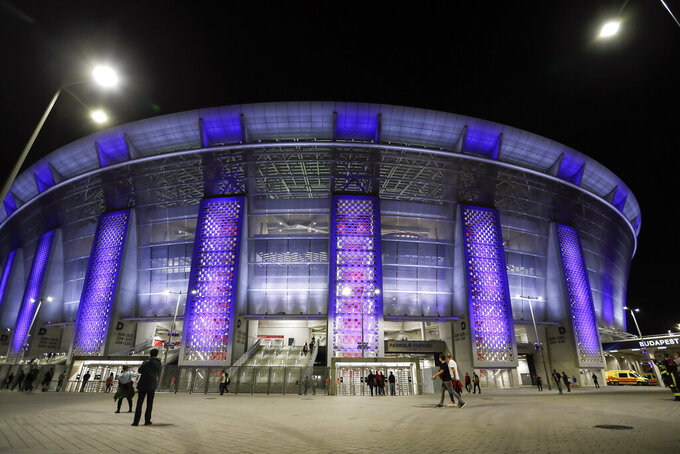 FILE - In this file photo dated Thursday, Sept. 24, 2020, a few people walk outside the stadium before the UEFA Super Cup soccer match between Bayern Munich and Sevilla at the Puskas Arena in Budapest, Hungary. The coronavirus has shaken up the Champions League and Europa League again, causing five games this week to move to neutral venues across the continent, including Leipzig hosting Liverpool at the Puskas Arena in Budapest on upcoming Tuesday Feb. 16, 2021.(AP Photo/Laszlo Balogh, FILE)

The coronavirus has shaken up the Champions League and Europa League again, causing five games this week to move to neutral venues across the continent, with more relocations to come.

It's a confusing series of workarounds to national border restrictions on the spread of virus variants. Some politicians are worried by what they see as privileged soccer stars evading the spirit of the law.

“Professional soccer, and other sports too, seem to be living in another cosmos where consideration is a foreign word,” Dagmar Freitag, who chairs the German parliament's sports committee, told radio broadcaster DLF on Saturday.

Her concern comes as Leipzig prepares to host Liverpool at the Puskas Arena in the Hungarian capital, Budapest, on Tuesday. German authorities refused permission for Jurgen Klopp's team to enter the country because of the spread of a coronavirus variant in Britain. Next week, Borussia Mönchengladbach will use the same venue to entertain Manchester City.

Meeting in a neutral country is a handy solution for the clubs and UEFA, which is desperate to keep the European schedule on track. Criticism in Germany grew louder after Bayern Munich went to Qatar for the Club World Cup and Thomas Müller contracted the virus. He flew home in a protective suit on a private jet before entering quarantine.

Coronavirus variants in Britain are also the reason for Chelsea playing Atletico next week in Bucharest, where European knockout games have been a rarity since Steaua Bucharest's European Cup-winning heyday in the 1980s.

Liverpool, City and Chelsea are scheduled to play at home in the second-leg games, but that could change if Germany and Spain insist on clubs entering quarantine on their return home.

The Europa League has a similarly scrambled schedule. Virus variants are spreading in Britain and Portugal, so Arsenal and Benfica's round-of-32 games had both legs switched to neutral venues — the Stadio Olimpico in Rome and Olympiacos' stadium in Piraeus.

On top of that, Real Sociedad is hosting Manchester United in Italy, Tottenham is visiting Austrian club Wolfsberg in Hungary and Norwegian travel restrictions have moved Molde's game against Hoffenheim to Villarreal's stadium in Spain.

Next month comes another test for UEFA. World Cup qualifiers will pull players out of their club bubbles and see them travel the continent for up to three national-team games.

The financial might of the English Premier League means dozens of national teams have players resident in Britain who might face entry bans elsewhere. Leaving them out of squads would diminish the appeal of the games and could tip the competitive balance, but moving or postponing more than a handful of fixtures could prove extremely difficult.