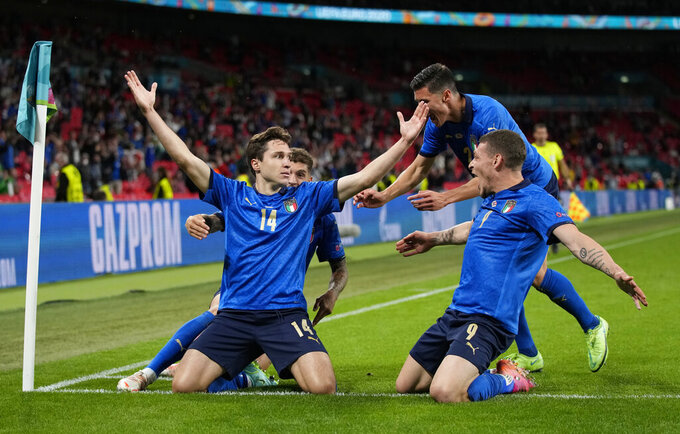 Italy's Federico Chiesa, left, celebrates with his teammates after scoring his side's opening goal during the Euro 2020 soccer championship round of 16 match between Italy and Austria at Wembley stadium in London, Saturday, June 26, 2021. (AP Photo/Frank Augstein, Pool)

BRUSSELS (AP) — The EU's head office warned European Championship organizers on Monday to be extra vigilant when staging the semifinals and final in London amid the rise of the highly contagious delta variant of the coronavirus.

The Euro 2020 tournament is being held around the continent, but the final three matches will all be at Wembley Stadium.

“I would like to share my doubt with you about the possibility of organizing the final or the semifinal in Wembley in a stadium — full stadium,” EU Commission vice president Margaritis Schinas told European Union legislators.

At least three of the four semifinalists will be bringing fans from across the Channel, with England the only British team still with a chance of advancing that far.

“Given that the United Kingdom is restricting its citizens movements to the European Union needs to be a certain amount of symmetry in these kinds of decisions, a certain amount of proportionality,” Schinas said. "So, I think here that UEFA would do well to carefully analyze its decision.”

Schinas told legislators that EU scientific projections showed that 70% of new infections are projected to be due to the delta variant in Europe by early August, and 90% by the end of August.

“There is clearly a very worrying trend," Schinas said, "something that compels us to continue being very vigilant.”