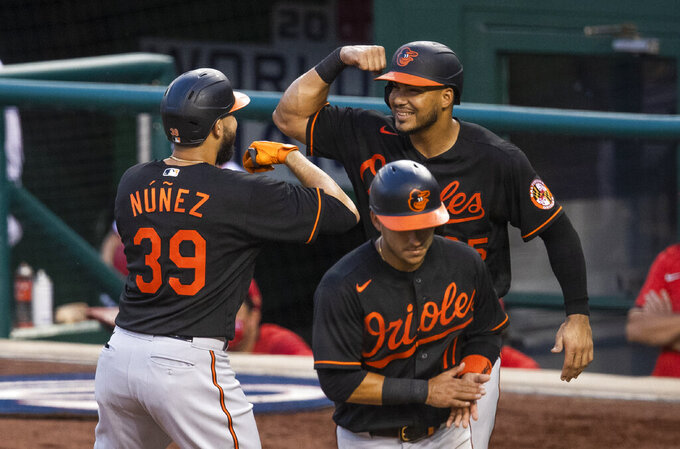 WASHINGTON (AP) — Even Chris Davis got in on the act for the suddenly slugging Orioles, doubling his season total by collecting two of Baltimore’s 19 hits and raising his average from .087 to .143 in an 11-0 victory over the Washington Nationals on Friday night.

Seven of the Orioles’ nine starting position players each got at least a pair of hits. José Iglesias led the way by going 4 for 4 with three RBIs, and Renato Núñez added a three-run homer to back left-hander Tommy Milone (1-1), whose six-inning outing was the longest by an Orioles pitcher this year.

Milone, who was drafted by the Nationals in 2008 and briefly pitched for them in 2011 and 2018, allowed just three hits and didn’t walk anyone.

The Orioles were coming off getting swept in four games at home by the cobbled-together, coronavirus-struck Miami Marlins. But after scoring a grand total of once through the first three games of that series, Baltimore put up seven runs in the finale Thursday, then kept on swinging well Friday against the reigning World Series champion Nationals and starter Aníbal Sánchez (0-2).

By the time Sánchez had recorded four outs, Baltimore led 3-0, with four hits and two walks the first time through the lineup. In all, he gave up five runs, 10 hits and three walks in 5 1/3 innings as Washington dropped its second straight game and fell to 4-6.

Reliever Ryne Harper entered and turned a manageable deficit for Washington into an 8-0 laugher by serving up a home run, two doubles and a single to the first four hitters he faced. That included Núñez’s fifth homer, which landed in the visitors’ bullpen in left.

Baltimore put up three more runs in the seventh against another reliever, Wander Suero.

World Series MVP Stephen Strasburg is scheduled to make his 2020 debut in Sunday’s series-ender against Baltimore. Strasburg, who made all 33 starts last season and led the NL in innings (209) and wins (18) before going 5-0 in the postseason, has been sidelined by a nerve issue in his throwing hand.

Orioles LHP John Means likely will miss Sunday’s start; he went on the bereavement list Wednesday following the death of his father. “It’s still a little bit unclear when he’s going to return. We’re going to give him the time he needs to be to be with his family,” manager Brandon Hyde said. Hyde was unsure who will be his first pitcher Sunday and is considering making it a bullpen game.

Orioles: 3B Rio Ruiz returned after missing two games with a sore shoulder. He was the only member of the starting lineup without a hit, going 0 for 5 with three strikeouts, but he did walk and score a run in the second.

Nationals: RHP Max Scherzer was slated to throw on flat ground Friday afternoon to test the tweaked right hamstring that ended his start Wednesday after just one inning.