Even with empty stadiums, NFL still a ratings monster 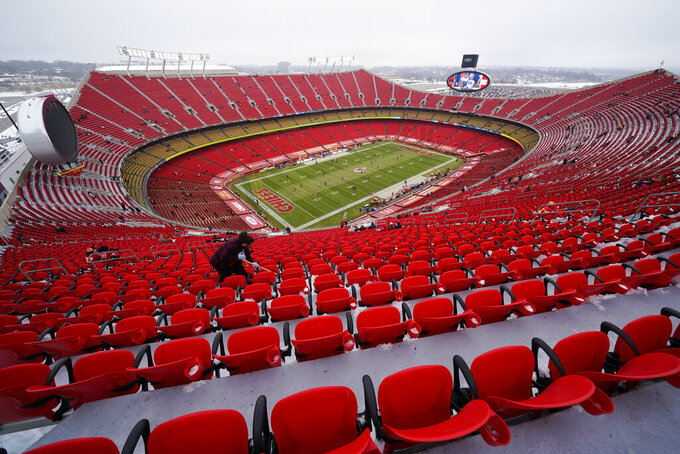 A worker cleans seats in Arrowhead Stadium before an NFL football game between the Kansas City Chiefs and the Los Angeles Chargers, Sunday, Jan. 3, 2021, in Kansas City. (AP Photo/Charlie Riedel)

Regular-season ratings for NFL games declined this season following two straight years of increases. But in a year that saw the challenges of the coronavirus pandemic and a presidential election, the 7% decrease isn't as bad as the league and its broadcast partners feared before the season began.

Games averaged 15.6 million television and digital viewers, according to the league and Nielsen. The league averaged 16.5 million regular-season viewers last season after posting 5% gains in both 2018 and ’19.

Overall, the continued ratings strength of the NFL — even with most games played in empty or mostly empty stadiums — underscores the financial underpinnings of the league's decision to play a full season amid a pandemic in which more than 21.5 million Americans have been infected. The networks pay a combined $5.86 billion per season for the rights to broadcast NFL games, and they are rewarded with huge audiences and revenue from advertisers eager to reach viewers.

“The NFL is a ratings generator and leader throughout entertainment. It is so big and the audience is so committed, I think the only thing the networks worry about is the score (of the games) which determines how long people tune in,” said former CBS sports president Neal Pilson, who now runs his own sports television consulting company.

During the last presidential election year in 2016, NFL ratings were down 8%. However, that year they were down 14% at midseason before rallying. In 2020, the declines remained between 6% and 8% throughout the season.

It was the third straight election year in which ratings have gone down.

NBC’s “Sunday Night Football” finished as prime time’s top show for the 10th straight year, but the 17.4 million average was down 15% from last season. The Sunday night games were also outdrawn by the late-afternoon kickoffs on Fox and CBS.

Both packages ended the season on high notes. The Christmas game between Minnesota and New Orleans attracted 20.1 million viewers on Fox, making it the most watched Christmas Day program since 2016.

Fox ended up averaging 18.1 million for its Sunday games. That's down 6% but marks the first time since 2009 the afternoon games have outdrawn “Sunday Night Football.”

The 23.2 million average for the “America's Game of the Week” late-afternoon game during doubleheader weeks makes it television's most-watched package for the 12th consecutive season.

Fox Sports executive vice president Michael Mulvihill was pleased with the late-game numbers after games were moved around due to poor play in the NFC East, whose teams typically draw strong viewership.

“It makes you look to next season with a lot of optimism,” he said. “Most of the factors for the decline are temporary. There won't be an election and hopefully we will be largely post-pandemic.”

The NFL is expected to negotiate extensions for all of its packages during the offseason. ESPN is going into the final year of its current deal, where they pay $1.8 billion per season. NBC, CBS and Fox are under contract through 2022. Of the three, Fox pays the most with a combined $1.86 billion for the Thursday night and Sunday packages.

The annual rights fees collected by the league is expected to easily surpass $6 billion per season. ESPN parent company Disney would like to get back into the Super Bowl rotation, which is why the “Monday Night Football” simulcast numbers on ABC were viewed with increased scrutiny. There is speculation that Monday night games might be returning full-time to network television for the first time since 2005.

“Both sides have made it clear they want to renew. Even if the ratings are slightly off the league still delivers the ad revenue and viewing numbers that others don't,” Pilson said.