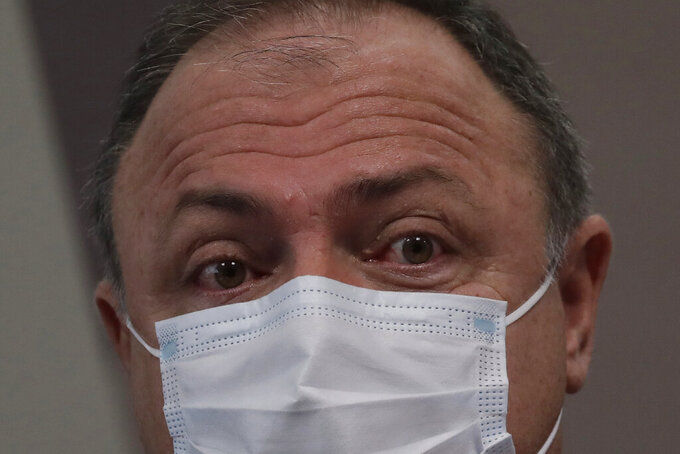 Brazil's former Health Minister Eduardo Pazuello testifies before the Senate for an investigation of the government's management of the COVID-19 pandemic in Brasilia, Brazil, Wednesday, May 19, 2021. (AP Photo/Eraldo Peres) 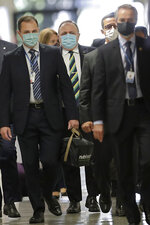 RIO DE JANEIRO (AP) — A former health minister denied receiving any direct orders from President Jair Bolsonaro during his 10 months in the post, providing the first day of his Senate testimony Wednesday that analysts saw as an attempt to shield Brazil’s leader from any blame over the government’s pandemic response.

Eduardo Pazuello’s testimony to the Senate committee investigating the Bolsonaro administration’s handling of COVID-19 had been among the most widely anticipated. He was Brazil’s top health official from May 2020 to March 2021.

“The actions were all mine,” Pazuello said, adding that the president never “issued an order to do anything other than what I was doing.”

“The president told me and every minister several times: The person who discusses health issues is Minister Pazuello. So never, never -- and I will repeat -- not once was I called to get guidance from the president in a different way,” he said.

Pazuello’s time as health minister was the longest of the four who have served during the coronavirus pandemic. The active-duty army general had no prior public health experience, instead possessing a background in logistics. He left the post amid a surge in COVID-19 deaths and following a series of moves criticized by health experts.

Asked why he left the job, Pazuello had a short answer: “Mission accomplished.”

“If the mission was to protect the president, he fulfilled the mission,” political consultant Thomas Traumann said on Twitter.

The most tense moment of Wednesday’s testimony came after Sen. Eduardo Braga, considered to be a moderate, accused Pazuello of “giving wrong, deceitful information” about the city of Manaus’ oxygen supply crisis in January. The difficulties of the Amazon city drew global notice as COVID-19 patients died breathless for weeks.

“You were there and you saw with your very eyes. The people of Amazonas state died because of the lack of oxygen,” Braga shouted as other senators nodded in agreement. “We weren’t short of oxygen for three days, it was more than 20 days. Just look at the number of dead. Just look at the desperation.”

Pazuello proved more compliant as minister than his two predecessors who left amid disagreements with Bolsonaro, particularly over prescription of chloroquine to treat COVID-19. Pazuello’s ministry backed the use and distribution of the unproven malaria pill.

Marco Antonio Teixeira, a professor of political science at Brazil’s Getulio Vargas Foundation, said the testimony was inconsistent with that given by other witnesses before the Senate committee.

“Pazuello is trying to limit the responsibility to the ministry and prevent it from reaching the presidential palace,” Teixeira told The Associated Press. “It will be difficult for him to succeed. Other testimony in the probe and Bolsonaro’s own comments have shown the opposite.”

Sen. Renan Calheiros, who is in charge of summoning the investigation’s witnesses, asked Pazuello several times to explain why the government delayed in responding to the offer from the pharmaceutical giant.

Pazuello said his ministry spent the time analyzing the proposal. “We were busy with discussions about the clauses of the vaccine contract in September and October,” he said.

Brazil has recorded almost 440,000 deaths from the virus, with a peak of more than 3,000 daily deaths in mid-April, several weeks after Pazuello’s departure. The number of deaths has since retreated, but remains near 2,000 each day and is the world’s second-highest tally.

During another testy exchange with lawmakers on the Senate commission, Pazuello denied that Brazil’s president ordered him to scrap plans to purchase vaccines made by Chinese pharmaceutical company Sinovac and bottled by Sao Paulo state’s Butantan Institute.

Bolsonaro said Oct. 21 on Twitter that he decided to cancel the purchase, but Pazuello said a formal order never materialized.

“The president never asked me to undo any contract with Butantan,” he told the lawmakers.

Frustrated lawmakers asked him again if there was an order from Bolsonaro. “A post on the internet is not an order,” Pazuello responded.

His testimony had been expected to run at least into late Wednesday, but it was cut short in the afternoon.

The chairman of the inquiry, Sen. Omar Aziz, who is a physician, told journalists that Pazuello needed medical attention but would resume his testimony Thursday morning.