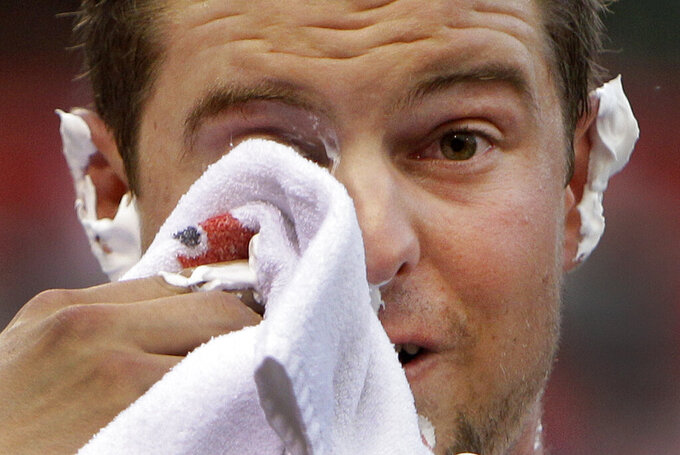 FILE - In this July 4, 2011, file photo, St. Louis Cardinals' Mark Hamilton wipes his face after being hit with a shaving cream pie from teammate Colby Rasmus following the Cardinals' 1-0 victory over the Cincinnati Reds in a baseball game in St. Louis. On Friday, April 10, 2020, under an accelerated schedule prompted by dire circumstances, the former big leaguer is set to graduate a month early from medical school on Long Island. Next stop for the rookie doc, most likely, the first-hand fight against the coronavirus pandemic. (AP Photo/Jeff Roberson, File)

NEW YORK (AP) — If he wanted, Mark Hamilton could show off his World Series ring at work.

But the fill-in first baseman for the 2011 champion St. Louis Cardinals prefers to keep that prize safe at home.

“The surgical scrub tub, not the most conducive place to wear it,” Hamilton said.

On Friday, under an accelerated schedule prompted by dire circumstances, the former big leaguer is set to graduate a month early from medical school on Long Island.

Next stop for the rookie doc, the first-hand fight against the coronavirus pandemic in one of the world’s hardest-hit areas.

“I could get the call tomorrow, that it’s time to go in,” Hamilton said this week. “I have had an incredible journey to becoming a doctor over the last four years, and not once did I think that I would find myself entering the field in a time like this.”

“Over both my careers, it’s the same thing. You’ve got a job to do, you’re needed, do them to the best of your ability,” he said.

The 35-year-old Hamilton spent the first half of the 2011 season with the Cardinals. He subbed for slugger Albert Pujols a few times and even got a winning hit that ultimately helped St. Louis squeeze into the playoffs by one game.

The left-handed hitter who played 47 games in the majors will join another lineup once he leaves the Donald and Barbara Zucker School of Medicine at Hofstra/Northwell.

“That’s a great story, what Mark’s done. That’ll be a high point at this period,” said Hall of Famer Tony La Russa, Hamilton’s manager with the Cards.

“What he’ll be doing, out there on the front lines helping people, that’s really something,” he said.

Throughout baseball history, plenty of guys have drawn the nickname Doc -- Dwight Gooden and Roy Halladay among them.

Far fewer have earned the title in the classroom -- including Moonlight Graham, the real-life ballplayer-turned-doctor portrayed in the film “Field of Dreams.”

Perhaps the most prominent was Bobby Brown, an October star for the New York Yankees in the 1940s and ’50s who also was a military veteran, president of the American League and longtime cardiologist.

It’s a path Hamilton -- who played at Tulane, as did Brown -- planned on long ago.

“Academia was always important to me,” Hamilton said. “I always felt like I was going to do this.”

Hamilton comes from a family that has achieved success on and off the field.

His brother played soccer in college, his sister is a top equestrian. His grandfather was a basketball star in the forerunner of the NBA.

Hamilton’s father, Stanley, was the longtime head of pathology and laboratory medicine at MD Anderson Cancer Center in Houston. He currently holds the same position at the City of Hope center in Southern California.

“My dad jokes that the athletic ability skipped a generation,” Hamilton said.

A 6-foot-4 power hitter, Hamilton helped Tulane reach the 2005 College World Series. The next year, he was a second-round draft pick by the Cardinals.

In September 2010, Hamilton got the call to the majors and posted his first two hits. In 2011, he stayed with St. Louis almost all the way to the All-Star break, mostly as a pinch hitter.

Hamilton’s highlight came on July 4 before a big crowd at Busch Stadium. Batting for ace Chris Carpenter with two outs and a runner on third in the eighth inning of a scoreless game, his infield single off Johnny Cueto gave the Cardinals a 1-0 win over Cincinnati.

His reward? An on-field pie in the face during the postgame celebration.

Within a week, Hamilton was sent back to Triple-A for good. He spent parts of the next three years in the St. Louis, Boston (getting a big welcoming hug from David Ortiz) and Atlanta organizations.

After nine productive pro seasons that included over 100 home runs in the minors, he was released in July 2014, three days before his 30th birthday.

Plus, a World Series ring that he says he rarely wears.

Hamilton plans to enter the field of interventional radiology. But before that, his first year as an internal medicine resident is certain to be dominated by the virus outbreak, managing patients admitted at Long Island Jewish Medical Center and North Shore University Hospital in the Northwell Health system. He'll also spend elective weeks in the ICU.

“My role in the COVID crisis will be considerably more involved once that starts,” he said. “Entering the front lines straight out of school is daunting. But I’m ready, I’m prepared.”

Hamilton lives in Queens, about a 15-minute drive from the New York Mets’ home at Citi Field, with wife Lauren and their 9- and 6-year-old daughters. He said he can’t pinpoint the last time he swung a baseball bat.

He’s not playing the what-if game, either.

“Would I trade it now? No, I wouldn’t. I couldn’t be happier with the way things have worked out,” he said. “No regrets.”