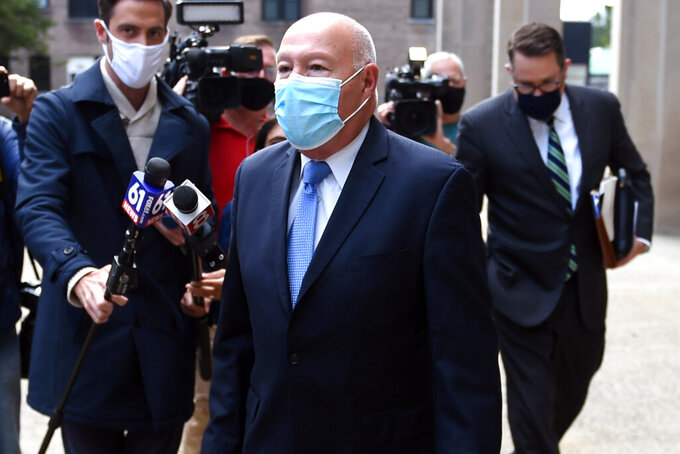 HARTFORD, Conn. (AP) — The former police chief of Connecticut's largest city is urging a federal judge to not send him to prison for corrupting the process that led to his appointment in 2018, saying he has taken full responsibility, is now suffering financial hardship and is susceptible to serious complications from the coronavirus.

Former Bridgeport Chief Armando “A.J.” Perez is pushing instead for home confinement, probation and an order of nearly $300,000 in restitution to the city, according to a sentencing recommendation filed in federal court Monday by his lawyer.

Perez and Bridgeport's former acting personnel director, David Dunn, resigned in September and pleaded guilty the following month to defrauding the city and making false statements to FBI agents. Both face up to two years in prison under federal sentencing guidelines, which are not mandatory. Their sentencings are scheduled for next month.

Dunn, 73, also is urging U.S. District Judge Kari Dooley in Bridgeport to sentence him to probation and not prison, according to his sentencing recommendation, also filed Monday. Dunn said he has prepaid nearly $150,000 in restitution to the city and also is at risk for serious complications from COVID-19.

The U.S. attorney’s office for the Southern District of New York, which is prosecuting the cases, declined to comment Tuesday on Perez and Dunn's sentencing requests, with a spokesperson saying the office will respond soon in court filings.

Perez, 65, who had a nearly four-decade career with Bridgeport police, admitted to receiving confidential information about the police chief’s examination stolen by Dunn, including the questions for an oral examination and the scoring guide for written essays. He also admitted that he had two officers complete his essays, passed the work off as his own and lied to federal authorities in an effort to cover up his actions.

Perez ended up being ranked among the top three candidates for the police chief's job and was appointed by Mayor Joe Ganim, who has been close to Perez for years. Ganim, who served seven years in prison for corruption during his first stint as mayor from 1991 to 2003, has denied wrongdoing in Perez's appointment and has not been charged.

Perez's lawyer, Robert Frost Jr., wrote in the sentencing recommendation that Perez is facing severe consequences from the scandal that do not involve prison time, including public shame, liquidation of most of his life savings to pay the $300,000 restitution and health problems including hypertension that make him him susceptible to severe complications from COVID-19 if he gets infected.

“A.J. is deserving of punishment for his crimes, but he is being punished already,” Frost wrote. “Today, instead of living out his retirement as a pillar of his community with the distinction of being the first Hispanic Chief of Police of the City of Bridgeport, A.J. faces his retirement years as a pariah and litigation target.”

Frost also said other public figures have avoided prison time for committing federal crimes. He noted that Kevin Clinesmith, a former FBI lawyer, was sentenced to probation in January for altering an email the Justice Department relied on in its surveillance of an aide to President Donald Trump during the Russia investigation.

Perez's sentencing recommendation also including several letters from supporters praising Perez's good character and the good he has done for the city.

“A.J. is obviously disappointed with himself and with the personal weakness he displayed in deceiving the (police chief) Selection Committee, and then lying to law enforcement to avoid the shame and consequences of what he did. It is a fall from grace that has been punishing and painful,” Frost wrote.

Dunn's attorney, Frederick Paoletti, wrote in a sentencing recommendation that Dunn helped Perez because he believed Perez was the most qualified candidate for the chief's job, but faced some difficulties in the hiring process.

“David Dunn honestly thought that Perez would be at a marked disadvantage ... since English was Perez's second language and because he lacked a college degree,” Paoletti wrote.