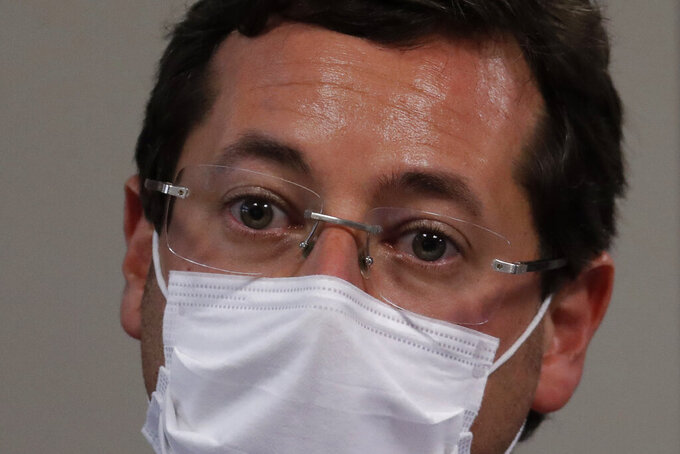 Fabio Wajngarten, former Communications Secretary, testifies during a Brazilian Senate commission inquiry investigating the government’s management of the COVID-19 pandemic, in Brasilia, Brazil, Wednesday, May 12, 2021. Wajngarten is an ally of President Jair Bolsonaro, who has been one of the world’s most prominent opponents of restrictions aimed at curbing the disease. (AP Photo/Eraldo Peres)

Bolsonaro's former communications director, Fábio Wajngarten, testified for more than six hours as part of the Senate’s investigation into the administration's handling of the coronavirus outbreak. By late afternoon, several senators were calling for Wajngarten to be jailed.

Critics of the far-right president had been keenly waiting for Wajngarten's appearance following an interview he gave to Brazilian magazine Veja last month in which he said the Health Ministry had shown “incompetence and inefficiency in the purchase of vaccines” for a nation that has seen more than 400,000 pandemic deaths.

In his testimony Wednesday, Wajngarten said a letter sent in September by pharmaceutical giant Pfizer offering a contract for 70 million doses of coronavirus vaccine went unanswered for two months. But he didn’t allege any incompetence by individual officials, saying the problems stemmed from the bureaucracy's rigid rules for purchasing vaccines.

The former official avoided answering questions about ex-Health Minister Eduardo Pazuello. Pazuello "had the courage to take office at the worst moment of the pandemic,” Wajngarten said. “I understand that incompetence is being held hostage by the bureaucracy.”

Wajngarten found himself the target of ire from most senators on the investigation’s commission, among them Sen. Omar Aziz, its chairman.

Aziz said the session could be suspended if Wajngarten continued avoiding “objective” answers and threatened to ask Veja magazine for the audio of its interview. He also said Wajngarten could be summoned again as a target of the investigation and no longer be considered a witness.

“Please don’t underestimate our intelligence. Nobody is an idiot here. You are lying to all of us,” Aziz said.

Sen. Renan Calheiros, who is in charge of summoning the committee's witnesses and will write the report on its findings, called Wajngarten a “liar.” He said Wajngarten should be jailed for not testifying truthfully, as required by law.

Leftist Sen. Fabio Contarato echoed that complaint. "This man (Wajngarten) must leave here imprisoned for flagrant crime. If he is not imprisoned, this commission will not have the ability to do anything else. You are deliberately lying.”

Wajngarten did draw support from the 11-member committee’s four senators who allied with Bolsonaro.

“You came here as a ‘human bomb.’ But the feeling among senators is disappointment because the truth is prevailing in this story,” said Sen. Ciro Nogueira.

Brazil has registered 425,000 confirmed deaths from COVID-19. The South American nation recorded more virus deaths in the first four months of 2021 than through all of last year, though the numbers of daily cases and deaths have retreated over the last weeks.

Critics say Bolsonaro’s frequent downplaying of the coronavirus and his fervent opposition to restrictions on economic and social activity have added to Brazil’s death toll.

Wajngarten in his testimony noted he was sick with COVID-19 during the rollout of a government publicity campaign, “Brazil can’t stop,” that argued against lockdowns and called for keeping the economy going.

Senators quickly produced videotaped comments from Wajngarten at the time saying he was working normally from home and approving communication strategies.