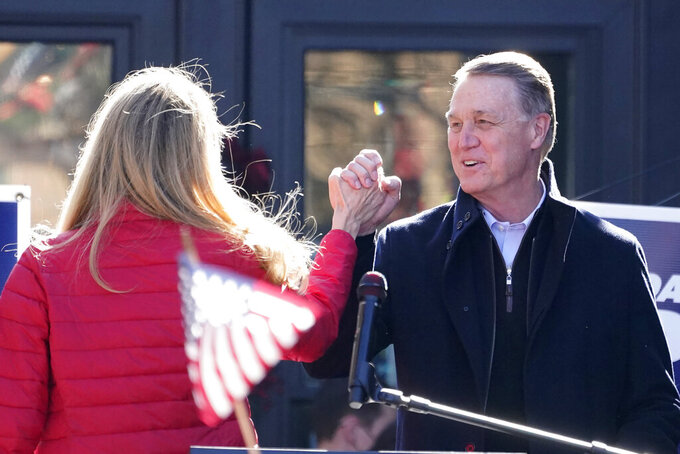 SAVANNAH, Ga. (AP) — Two months after the November elections, Georgia voters have unfinished business. The outcome will determine partisan control of the U.S. Senate and how lawmakers deal with a new White House.

Republican Sens. David Perdue and Kelly Loeffler are both on the ballot Tuesday in runoff elections because neither got enough votes Nov. 3 to win outright.

Here's a look at how two key Georgia elections pushed into 2021, who's running and what's at stake.

Both of Georgia's Senate seats weren't supposed to be up for grabs in 2020.

Perdue is wrapping up a six-year term. The Republican was first elected in 2014 after running as a political outsider and former CEO of Reebok and Dollar General. In his first term, Perdue became known as one of Trump's chief defenders in the Senate.

The race got shaken up in August 2019 when fellow GOP Sen. Johnny Isakson announced he was resigning because of failing health. Georgia's governor appointed Loeffler to fill the seat, but she would have to run in the November election to fill the last two years of Isakson's term.

Like Perdue, Loeffler's background was in business rather than politics. Before joining the Senate, she worked at Intercontinental Exchange, a company founded by her husband that operates the New York Stock Exchange. One of the Senate's wealthiest members, Loeffler has spent more than $20 million of her own cash running and traveled the state in her private jet.

As for the challengers, Ossoff and Warnock are seeking to become the first Democrats to win a U.S. Senate election in Georgia since 2000.

If he defeats Perdue, Ossoff would be the Senate's youngest member at age 33. His introduction to politics came as a college students when he interned for Georgia U.S. Rep. John Lewis, the Democrat and civil rights hero who died in July. Ossoff runs a company that produces documentary films and ran for a House seat in 2017, which he lost but proved a formidable fundraiser.

In the wide-open race for Loeffler's seat, Democratic leaders united early to endorse Warnock, pastor of the Atlanta church where Martin Luther King Jr. preached and one of Georgia's best-known Black ministers. Warnock's activism from the pulpit on issues such as bail reform and expanded voting rights have become centerpieces of his campaign — just as his sometimes fiery sermons have provided ammunition for attacks by Republicans.

WHY IS GEORGIA STILL VOTING?

Georgia law requires candidates for Congress and state offices to win by getting more than 50% of the vote. Otherwise, races get forced into a runoff between the top two finishers.

In November, Perdue finished 88,000 votes ahead of Ossoff but fell just short of a majority with 49.7% of the vote in a three-way race that included Libertarian Shane Hazel.

A runoff was virtually assured in the special election for Loeffler's seat. Because she was running to complete her predecessor's unfinished term, state law requires a political free-for-all with multiple Republicans and Democrats sharing the ballot. Loeffler and Warnock were the top finishers out of 20 candidates, with neither getting more than one-third of the vote.

Why wait until 2021 to resolve those races?

Georgia amended its election laws in 2014 to require nine weeks between general elections and runoffs. The runoff period had been just four weeks. But that changed after the U.S. Justice Department sued Georgia, arguing military members stationed overseas didn't have enough time to receive and mail back absentee ballots.

If Perdue and Loeffler both lose their seats, Republicans lose control of the U.S. Senate after six years holding a majority in the chamber.

The November elections resulted in Republicans holding 50 Senate seats and Democrats controlling 48. Only the two seats in Georgia remain undecided.

A win by either Perdue or Loeffler would keep the Senate in Republican hands.

But victories by both Ossoff and Warnock would leave both parties with 50 seats each — and therefore tilt control to Democrats. That's because Democratic Vice President-elect Kamala Harris will serve as the Senate's presiding officer and will vote as needed to break any ties.

It would be a big win for Biden, as Democrats would control both houses of Congress.

WHERE DO THINGS STAND?

Perdue and Loeffler have cast themselves as the last line of defense against Democratic control of Washington. But their closing arguments have been complicated by Trump siding with Democrats in calling for one-time cash payments of $2,000 for pandemic relief, an amount most congressional Republicans oppose.

Both GOP senators have said they support Trump's demand for the extra money after months of caricaturing Democrats as socialists who favor wasteful spending. Ossoff and Warnock insist their rivals haven't done enough to try to force a vote on the higher relief payments in the Senate.

The two Democrats reported staggering fundraising of more than $100 million each during the past two months. Their hauls far outpaced the Republican incumbents, with Perdue reporting $68 million and Loeffler just under $64 million.

Georgia voters, meanwhile, have already been turning out in huge numbers despite the holidays and the pandemic. More than 2.8 million have voted early either in person or by mail — more than half of the 5 million total votes cast in Georgia in November.

Both sides are calling on their heaviest hitters to help turn out supporters. Trump has scheduled a Monday rally with Perdue and Loeffler in conservative northwest Georgia. Harris plans to campaign with Ossoff and Warnock on Sunday in Savannah, followed by Biden in Atlanta on Monday.

Heading into the final days, Perdue's campaign said Thursday that he and his wife learned they had been in close contact with a staffer who tested positive for COVID-19 and the senator was in quarantine despite having tested negative.