EXPLAINER: What is behind the latest unrest in N Ireland? 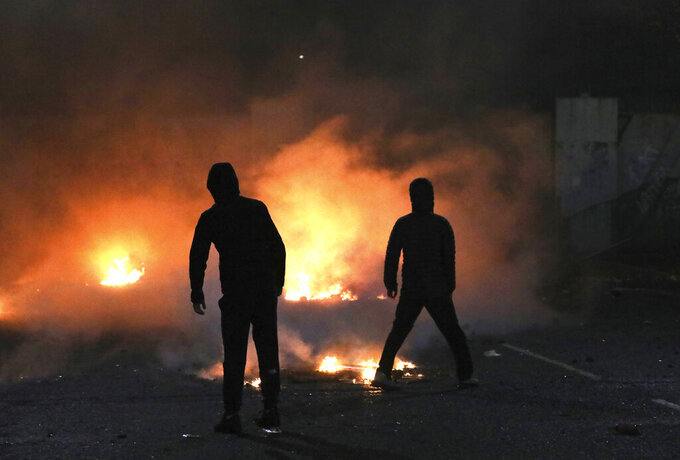 FILE - In this Wednesday, April 7, 2021 file photo, Nationalists and Loyalists clash with one another at the peace wall on Lanark Way in West Belfast, Northern Ireland. The chaotic scenes during a week of violence on the streets of Northern Ireland have stirred memories of decades of Catholic-Protestant conflict, known as “The Troubles.” A 1998 peace deal ended large-scale violence but did not resolve Northern Ireland’s deep-rooted tensions. (AP Photo/Peter Morrison, File)

LONDON (AP) — Young people have hurled bricks, fireworks and gasoline bombs at police and set hijacked cars and a bus on fire during a week of violence on the streets of Northern Ireland. Police responded with rubber bullets and water cannons.

The streets were calmer Friday night, as community leaders appealed for calm after the death of Prince Philip, Queen Elizabeth II's 99-year-old husband. But small gangs of youths pelted police with objects and set a car ablaze during sporadic outbreaks in Belfast.

The chaotic scenes have stirred memories of decades of Catholic-Protestant conflict, known as “The Troubles.” A 1998 peace deal ended large-scale violence but did not resolve Northern Ireland’s deep-rooted tensions.

A look at the background to the new violence:

WHY IS NORTHERN IRELAND A CONTESTED LAND?

Ireland, long dominated by its bigger neighbor, broke free about 100 years ago after centuries of colonization and an uneasy union. Twenty-six of its 32 counties became an independent, Roman Catholic-majority country. Six counties in the north, which have a Protestant majority, stayed British.

Northern Ireland’s Catholic minority experienced discrimination in jobs, housing and other areas in the Protestant-run state. In the 1960s, a Catholic civil rights movement demanded change, but faced a harsh response from the government and police. Some people on both the Catholic and Protestant sides formed armed groups that escalated the violence with bombings and shootings.

The British Army was deployed in 1969, initially to keep the peace. The situation deteriorated into a conflict between Irish republican militants who wanted to unite with the south, loyalist paramilitaries who sought to keep Northern Ireland British, and U.K. troops.

During three decades of conflict more than 3,600 people, a majority of them civilians, were killed in bombings and shootings. Most were in Northern Ireland, though the Irish Republican Army also set off bombs in London and other British cities.

HOW DID THE CONFLICT END?

By the 1990s, after secret talks and with the help of diplomatic efforts by Ireland, Britain and the United States, the combatants reached a peace deal. The 1998 Good Friday accord saw the paramilitaries lay down their arms and established a Catholic-Protestant power-sharing government for Northern Ireland. The question of Northern Ireland’s ultimate status was deferred: it would remain British as long as that was the majority’s wish, but a future referendum on reunification was not ruled out.

While the peace has largely endured, small Irish Republican Army splinter groups have mounted occasional attacks on security forces, and there have been outbreaks of sectarian street violence.

Politically, the power-sharing arrangement has had periods of success and failure. The Belfast administration collapsed in January 2017 over a botched green energy project. It remained suspended for more than two years amid a rift between British unionist and Irish nationalist parties over cultural and political issues, including the status of the Irish language. Northern Ireland's government resumed work at the start of 2020, but there remains deep mistrust on both sides.

HOW HAS BREXIT COMPLICATED THINGS?

Northern Ireland has been called the “problem child” of Brexit, the U.K.'s divorce from the European Union. As the only part of the U.K. that has a border with an EU nation — Ireland — it was the trickiest issue to resolve after Britain voted narrowly in 2016 to leave the 27-nation bloc.

An open Irish border, over which people and goods flow freely, underpins the peace process, allowing people in Northern Ireland to feel at home in both Ireland and the U.K.

The insistence of Britain’s Conservative government on a “hard Brexit” that took the country out of the EU’s economic order meant the creation of new barriers and checks on trade. Both Britain and the EU agreed that border could not be in Ireland because of the risk that would pose to the peace process. The alternative was to put it, metaphorically, in the Irish Sea — between Northern Ireland and the rest of the U.K.

That arrangement has alarmed British unionists, who say it weakens Northern Ireland’s place in the United Kingdom and could bolster calls for Irish reunification.

WHY HAS VIOLENCE ERUPTED NOW?

The violence has been largely in Protestant areas in and around Belfast and Northern Ireland’s second city, Londonderry, although the disturbances have spread to Catholic neighborhoods.

Britain left the EU’s economic embrace on Dec. 31, and the new trade arrangements quickly became an irritant to Northern Ireland unionists who want to stay in the U.K. Early trade glitches, exacerbated by the coronavirus pandemic, led to some empty supermarket shelves, fueling alarm. Border staff were temporarily withdrawn from Northern Ireland ports in February after threatening graffiti appeared to target port workers.

There was anger that British Prime Minister Boris Johnson, who long insisted there would be no new checks on trade as a result of Brexit, had downplayed the scale of the changes wrought by leaving the EU. Some in Northern Ireland's British loyalist community feel as if their identity is under threat.

“Many loyalists believe that, de facto, Northern Ireland has ceased to be as much a part of the U.K. as it was,” Ulster University politics professor Henry Patterson told Sky News.

Unionists are also angry at a police decision not to prosecute politicians from the IRA-linked Sinn Fein party who attended the funeral of a former Irish Republican Army commander in June, despite coronavirus restrictions.

Meanwhile, outlawed armed groups continue to operate as criminal drug gangs and still exert influence in working-class communities — though the main paramilitaries have denied involvement in the recent unrest.

Many of those involved in the violence were teenagers and even children as young as 12. They grew up after the Troubles, but live in areas where poverty and unemployment remain high and where sectarian divides have not healed. Two decades after the Good Friday peace accord, concrete “peace walls” still separate working-class Catholic and Protestant areas of Belfast.

The coronavirus pandemic has added new layers of economic damage, education disruptions and lockdown-induced boredom to the mix.

Despite calls for peace from political leaders in Belfast, London, Dublin and Washington, the knot of problems may prove difficult to resolve.

“These are areas of multiple deprivation with the sense of not much to lose,” Katy Hayward, a professor of politics at Queen’s University Belfast, said. “And when (people) are mobilized by social media telling them ‘Enough is enough, now is the time to defend Ulster,’ then many of them — too many — respond to that.”