EXPLAINER: Why Broadway is waiting until fall to reopen 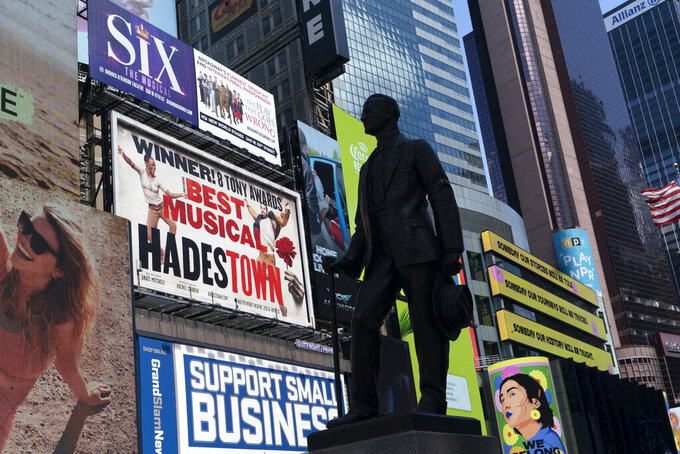 NEW YORK (AP) — Broadway shows are tripping over themselves to announce that tickets are once more available. But don't get dressed up just yet: The curtains won't rise for most until September or October.

WHY THE FOUR MONTH WAIT?

Selling tickets now allows producers to gauge interest in their shows, like putting a big toe in the water to check the temperature. Is there thunderous demand or is it more tepid? How enduring is the interest? Once producers get answers — and much-needed cash from interested theater-goers — they can plan. Shows that find a lukewarm response may need to invest in more advertising or change it up.

Broadway shows thrive on tourists — who were roughly two-thirds of the people in the seats before the pandemic struck — and producers are banking that visitor numbers will be up by fall. The hope is that theater lovers — both tourists and New Yorkers — will loudly cheer the return. It will be a big occasion.

“The moment those theater lights go down and the stage lights come up is probably going to be one of the most emotional moments in theater in New York. And I can’t wait to be standing in my spot in the back of the theater,” says Stacey Mindich, the lead producer of “Dear Evan Hansen.”

WHAT WILL HAPPEN OVER THE NEXT MONTHS?

Broadway shows can't just restart like flipping a light switch, especially big musicals. Cast members may have left, requiring new hiring. Orchestras and ensembles must re-learn their parts, choreographers need the cast in the room to synchronize and costumers need to check fittings. Producers say the task is like opening a show from scratch all over again.

The pandemic also has added new safety fears for everything from handling props to theater cleaning. Broadway seats are very close together, and the venues are not particularly airy or spacious. Just getting inside before the pandemic required standing in a long line and cramming into entrances. It's no surprise that the first report of COVID-19 invading Broadway was when a part-time usher and security guard tested positive.

So questions need to be addressed: Will temperature checks be enough? Must actors be vaccinated? Will audiences have to show vaccination cards? Will masks be required? Some theater owners have installed new air filters and some have updated bathrooms. Is that enough? Might shows eliminate intermission and bar service to curb people from mingling? Producers and union leaders must reach agreements on all these issues before shows open.

Audiences are also going to have to adjust. Actor Katharine McPhee wondered about small things, like folks coughing during a show. That used to be annoying; now it may be triggering. “I feel like it’s going to take a long time for people to not have some trauma connected to us all being fearful,” she said.

WHO IS IN BETTER SHAPE?

Those shows likely to fare best, at least initially, have legions of fans and histories as a tested entertainment source — think “Hamilton,” “The Lion King” and “Wicked.” Those in the most precarious positions are new plays or musicals that few know about, but are bravely opening post-pandemic. Initially, after 18 months of pent-up demand, theater lovers are expected to make a point of buying tickets and cheering the return. But the months after those die-hard fans have come and gone will be the trickiest. Theater actors certainly are hopeful.

“I think it has, for me, reset my passion for theater,” says Jesse Tyler Ferguson, who is waiting for his revival of “Take Me Out” to restart. “I think for a lot of people, it’s been something that we’ve taken for granted. And I think when we do get back to being able to commune and join together and watch live theater together, I’m going to have that same feeling in my heart and in my soul as when I first sat down to see my first Broadway show at 17 years old.”

WHY IT HAS TO BE ALL OR NOTHING

Away from the Great White Way, shows have already opened with socially distanced audiences, but that’s not possible for the 41 Broadway theaters. The financial demands simply don’t favor keeping many seats purposefully empty.

The average operating costs for a play are about $300,000 per week, while weekly costs run $600,000 for musicals. Conventional wisdom is that many shows need to sell at least 80% of tickets just to break even. Figuring out ticket pricing will also be a headache: Should there be regular prices initially and then deep discounts later in the fall to attract more wary customers? Disney is luring customers by promising to pay all Ticketmaster fees and offering skittish ticket buyers the freedom to exchange or even cancel tickets at no charge. There’s going to be a lot of number-crunching from now until fall.

Financials aside, the existing theater community is going through a reflective and turbulent period as it comes under criticism from people — inside and outside the business — demanding racial justice, inclusion, fair wages, accountability and representation.

Spurred on by the protests over the police-involved death of George Floyd, marchers have taken to the streets to denounce the labor union Actors Equity Association and have successfully forced producer Scott Rudin to step aside in the face of bullying allegations. The voices are calling for wholesale changes from a system that has been static for decades. Working out what a more inclusive Broadway will take time.