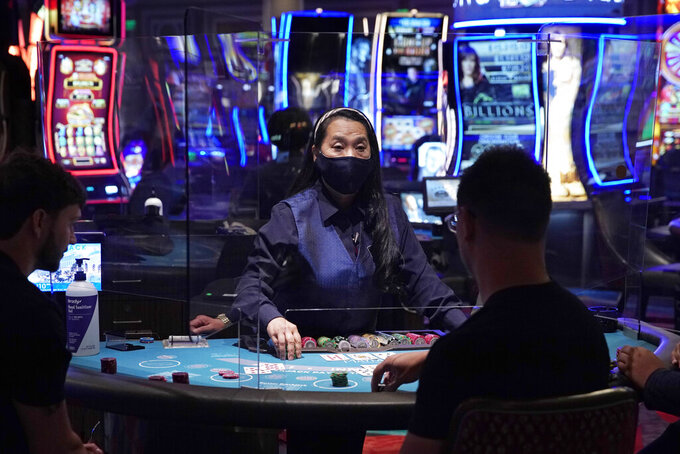 FILE - In this June 4, 2020 file photo, people play blackjack at the reopening of the Bellagio hotel and casino in Las Vegas.With more casinos and businesses reopening and health officials charting a recent uptick in COVID-19 cases, Nevada lawmakers on Friday, June 12, 2020 approved Gov. Steve Sisolak's plan to plug an $812 million budget deficit blamed on the coronavirus pandemic. An oversight committee vote to approve the Democratic governor's plan was along party lines, with Republicans united against it. State tax revenues plunged after Gov. Sisolak closed business and casinos in mid-March to prevent the spread of the communicable COVID-19 illness. (AP Photo/John Locher, File)

LAS VEGAS (AP) — Nevada casinos are now requiring gamblers and spectators to wear protective face coverings at table games that have no barriers.

The Nevada Gaming Control Board on Wednesday updated its health and safety policy required for the reopening of casinos, tightening rules for gamblers sitting down to play.

“Licensees must require patrons to wear face coverings at table and card games if there is no barrier, partition, or shield between the dealer and each player,” the board said in a statement. “This requirement applies to table and card game players, spectators, and any other person within 6 feet of any table or card game.”

The new rule applies to players of blackjack, roulette, craps, poker and other table games and all casino employees. Masks aren’t required of other casino patrons, including slot machine players, but casinos are required to offer and encourage masks.

Most casino workers have the ability to move around their properties, but dealers are confined to one location for an hour at a time and are exposed to hundreds of people every day, Control Board Chairwoman Sandra Morgan said.

“We were at least able to agree that face coverings (were needed) at table games, if there’s not going to be Plexiglas or any other kind of barrier,” she said. “The lack of individual patron responsibility is disappointing to say the least. So we have to do at least what we can to ensure that the gaming employees have some protection as well.”

Casinos across the state began reopening June 4 after being closed since March to slow the spread of the coronavirus.

Other precautions include seating limits at tables, with three players at blackjack, four at roulette and poker and six at craps.

Nevada health officials have reported more than 12,000 cases of COVID-19 and 475 deaths from the disease.

For most people, the new coronavirus causes mild or moderate symptoms, such as fever and cough that clear up in two to three weeks. For some, especially older adults and people with existing health problems, it can cause more severe illness, including pneumonia, and death. The vast majority of people recover.

— The U.S. Department of Labor reported Thursday that 14,399 new claims for unemployment were filed in Nevada last week, up from 10,748 the week prior. The report of a rise in Nevadans seeking unemployment came the day after the state announced the unemployment rate last month dropped slightly. Nevada's unemployment rate was 25.3% in May, according to the Nevada Department of Employment, Training and Rehabilitation. It's improved from April, when business closures and layoffs due to the virus rocketed the jobless rate to 30%, but it's still six times higher than the rate in February.

— The Nevada State Public Health Lab has added staff to address a backlog of processing COVID-19 tests and the backlog should be cleared Thursday evening, the lab's director Mark Pandori said. Washoe County this week said it is temporarily suspending testing people with no symptoms because of the backlog caused in part by increased testing of inmates at state institutions. Pandori said there was an increased demand for testing at the same times that some robotics that help process tests stopped functioning for a few days but are running again.