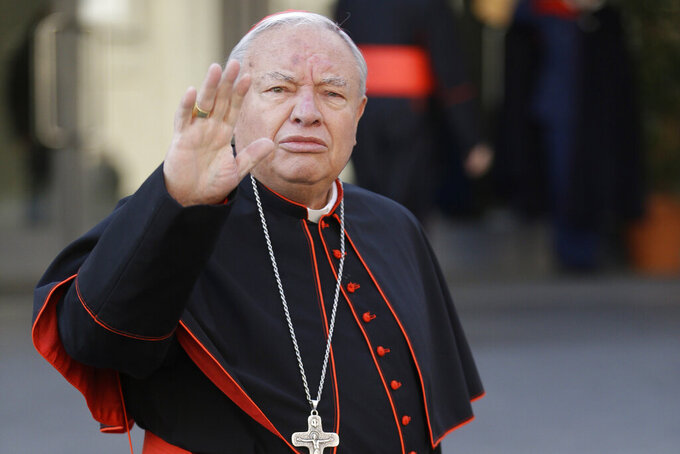 FILE - In this March 4, 2013 file photo, Cardinal Juan Sandoval Iniguez of Mexico, waves to reporters as he arrives for a meeting, at the Vatican. Facebook, in mid-January 2012, has placed a warning screen over a rambling chat by the retired Mexican cardinal, in which he claims coronavirus vaccines contain a satanic microchip. (AP Photo/Andrew Medichini, File)

MEXICO CITY (AP) — Facebook has placed a warning screen over a rambling chat by retired Mexican Cardinal Juan Sandoval Iñiguez in which he claims coronavirus vaccines contain a satanic microchip.

However, viewers on Saturday could still see the video, which was posted Jan. 12.

Sandoval Iñiguez is the emeritus archbishop of the archdiocese of Guadalajara, where he retired in 2011 after reaching the age of 75. He turns 88 in March.

In the video, he refers to “the chip that they are planning to put in the vaccine to control you, it is the mark of the beast.”

The video is titled, “The plot to impose a new world order without Christ.”

He also makes an unclear reference to a supposed smallpox vaccine at a laboratory in the United States.