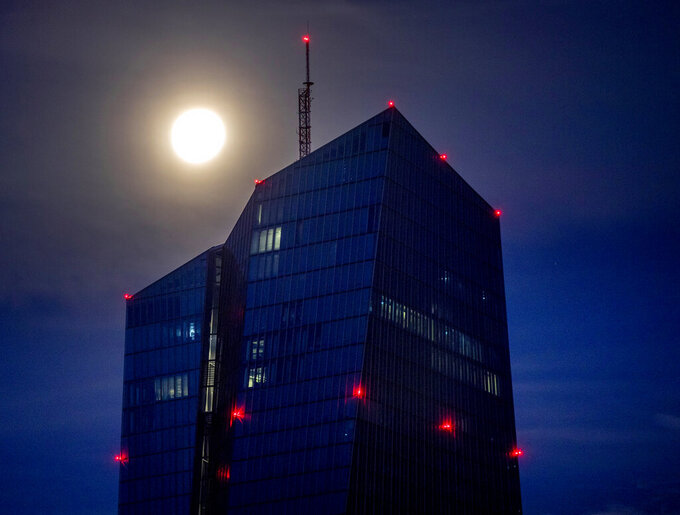 File - In this Thursday, Sept. 3 2020 file picture the moon shines over the European Central Bank in Frankfurt, Germany. Low inflation, in negative territory for the first time since 2016, is leading analysts to think the ECB will have to add more stimulus to support what could be a drawn-out, difficult recovery from the virus outbreak in the 19 countries that use the euro. (AP Photo/Michael Probst, File)

FRANKFURT, Germany (AP) — A startling fall in consumer prices and a stronger euro have increased pressure on the European Central Bank to provide another blast of monetary stimulus in support of a drawn-out economic rebound from the pandemic recession.

A 0.2% annual drop in prices in August in the 19 countries that use the euro underlined that demand from unsettled consumers across the economy remains weak despite the reopening of many businesses. While it also reflected one-time effects such as delayed summer sales, the drop is more evidence of how severely the pandemic has held back business activity in Europe, which along with the U.S. and China is one of three major pillars of the global economy.

The economy plunged by a dizzying 11.8% in the second quarter from the first quarter. And while experts say that the economy's recovery will be determined mainly by governments' ability to contain the pandemic, the ECB is doing what it can to help.

The focus after Thursday's policy meeting will be on President Christine Lagarde’s statements on the inflation outlook and the stronger euro, another risk factor for the economy because it can make life harder for exporters.

The bank's governing council is expected to keep interest rates unchanged at record lows and to leave its bond-purchase stimulus program at the current level of 1.35 trillion euros ($1.6 trillion). That stimulus program, which regularly injects newly printed money into the economy, still has 850 billion euros left to be used, giving the bank plenty of ammunition for now. Analysts, however, are predicting that the bank's leadership could add to that amount sooner than expected.

Analysts at Morgan Stanley originally expected more stimulus only next year. But after last week's “deflationary surprise, and with the drag from a stronger euro, we will be looking for any signal that the ECB may act earlier," for instance at the December meeting.

The fall in the consumer price index is mostly due to temporary factors such as a cut in German value-added tax and the slashing of prices by hotels, said Oliver Rakau at Oxford Economics. That means it doesn’t represent outright deflation, a dreaded downward price spiral that can become a long-term trap for an economy.

He expects a partial rebound in prices in the near term followed by a period of subdued inflation rather than a sustained fall in prices. “This won’t absolve the ECB from responding, but it does lessen the urgency,” he said. He predicted the bank would raise the amount of pandemic stimulus purchases this year.

The drop in inflation to below zero - the first time that has happened since 2016 - underlined how the ECB has struggled in recent years to consistently achieve its goal of keeping annual inflation close to but less than 2%. The U.S. Federal Reserve has also not been able to consistently hit its 2% inflation target but the ECB has fallen even farther short.

Low inflation may seem good for consumers but can make debt harder to repay and makes it harder for economically weaker eurozone countries to improve their competitiveness.

The ECB's chief economist, Philip Lane, said in a recent assessment on CNBC that “our baseline was built around that once the economy was unlocked there would be some recovery, but the reality is that while we still have to manage this virus in terms of social distancing and other restrictions, there’s not going to be a return to normal levels of economic activity for a considerable period.”

Recent economic indicators suggest the bounce back as businesses have reopened is losing some of its momentum as summer ended, says Jack Allen-Reynolds, senior Europe economist at Capital Economics.

Online retail sales have fallen without a corresponding upturn in in-store spending, and some indicators of business activity suggest the economy contracting again in Italy and Spain, two countries hardest hit by the virus and constraints on vacation spending. The rise in the value of the euro this summer, from about $1.12 in June to over $1.18 on Tuesday, has put more strain on exporters, among other things.

The most troubling factor, however, is that the number of infections has been rising again, raising fears of more restrictions on public life and commerce.