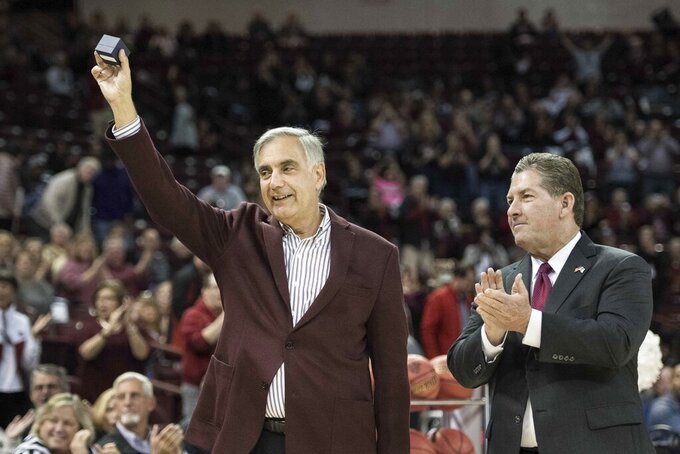 COLUMBIA, S.C. (AP) — University of South Carolina trustees turned Friday to a familiar person to temporarily run the school as they look for a new president after the previous leader resigned over a plagiarized graduation speech after a tumultuous 20-month tenure.

Harris Pastides was president for 11 years before retiring in 2019. He remained a consultant for the school and said he still has not traded in his Mini Cooper painted in the school colors of garnet and black.

“It sure feels good to be home again with each and every one of you," Pastides said after trustees unanimously hired him back for an extra $750,000.

Trustees met for nearly three hours Friday, with almost all of it happening behind closed doors.

There was no public discussion of former President Bob Caslen's resignation May 13 after the former Army general admitted that a commencement speech he gave earlier in the month lifted two paragraphs without attribution from a speech by Adm. William McRaven, the Navy SEAL in charge of the mission to take out terrorist leader Osama bin Laden.

Caslen also called the school “The University of California” in the same speech. “When trust is lost, one is unable to lead,” Caslen wrote in his resignation note.

Pastides is a a safe choice to regain that trust. He was a beloved president at the University of South Carolina, especially by students who sought selfies as he walked through campus or were invited to ride in his Mini Cooper and share their concerns. The university named him interim president in the same statement that announced Caslen's resignation, then later clarified that appointment had to be approved by trustees.

Pastides emphasized the "interim" in his title and said his goal is to give the university stability as it looks for another president for the 35,000 students at its flagship campus in Columbia and 17,000 students at seven other institutions around the state.

The search that ended with Caslen's hiring was divisive. There were no women as finalists and just one minority. Trustees appeared ready to start a new search when Gov. Henry McMaster called trustees and asked them to call for a vote on Caslen, who lacked a doctoral degree and research university experience.

Caslen won 11-8. Votes on the previous three University of South Carolina presidents had been unanimous to show unity.

The university will pay Caslen for seven more weeks to act as a consultant to help with transition matters like how the school is fighting COVID-19, trustees announced, They did not give the financial terms of the deal. Caslen's salary as president was $650,000 a year.

Trustees also Friday created a presidential search committee of eight board members, five faulty members and the student body president, which Vice Chairman Thad Westbrook said was a "diverse set of people and a diverse set of viewpoints.” The committee will also have additional advisors with close ties to the school who won't have a vote.

Westbrook also promised the committee would follow guidelines approved in 2020 to try to prevent allegations of political influence from McMaster and other powerful Republicans that led to protests before and during Caslen's hiring.

Pastides said he expects the next school year to be full of fun and purpose after dealing with more than a year of disruption from COVID-19 and the uncertainty of the past few weeks.

"We are resilient in times of adversity," Pastides said of the university he first came to in 1998 as a dean in the public health school.