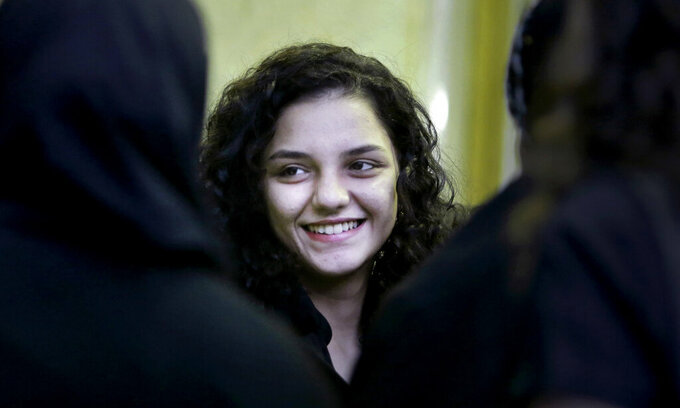 FILE - In this Saturday, Aug. 30, 2014 file photo, Sanaa Seif, the younger daughter of Ahmed Seif, one of Egypt's most prominent civil rights lawyer and campaigner, receives condolences for her father at Omar Makram mosque after being temporarily released form prison, in Cairo, Egypt. Saif familiy said that Sanaa was detained Tuesday, June 23, 2020. Sanaa was taken into an unmarked white van by what her family believes were officers dressed in plain clothes from outside the public prosecutor's headquarters in Cairo. (AP Photo/Amr Nabil, File)

Sanaa Seif, the youngest sister of activist Alaa Abdel-Fattah, was taken into custody outside the public prosecutor's headquarters in Cairo, her older sister, Mona Seif, said. Family members said men they believed to be security officers dressed in plain clothes put her in a white van.

Late Tuesday, the public prosecutor’s office issued a statement saying it had ordered the arrest of Sanaa Seif pending an investigation into charges that she "broadcast fake news and rumors about the country's deteriorating health conditions and the spread of the coronavirus in prisons" on Facebook, among a slew of other charges, including inciting '"terrorism," insulting a police officer and violating the state's protest ban.

It said she denied the charges and was ordered to remain in pretrial detention for 15 days. Egypt's broad counterterrorism laws often allow prosecutors to extend the pretrial period without limit.

The statement also said prosecutors had launched an investigation into an alleged assault on Abdel-Fattah’s family outside the Tora prison complex.

Family members including Sanaa Seif had been at the public prosecutor's office to file a complaint about the attack against them outside Cairo’s Tora prison complex a day earlier, Mona Seif said.

They had been going daily for a week to Tora prison hoping to receive a letter from activist and relative Alaa Abdel-Fattah that prison officials had promised they would pass on to them, the family said in a series of posts on social media.

In their posts, they said a group of women attacked them Monday when they were sleeping outside the prison complex, beating the two sisters and their mother and stealing their belongings while security officials stood nearby.

“Sanaa came to join us at the public prosecutor’s office (on Tuesday) so the prosecutors could see the bruises on her body from yesterday’s attack,” Mona Seif said.

His arrest on Sept. 29, 2019 came after he had been released in March following five years in prison for taking part in a peaceful protest against the military trials of civilians.

“The Public Prosecutor now has a choice: either to uphold the law and investigate the attacks against Sanaa Seif and her family, including the role of the security forces in yesterday’s assault, or to be complicit with the security forces in targeting Sanaa Seif and her family simply for questioning her brother’s arbitrary detention and inquiring about his health amid a pandemic,” he said.

Abdel-Fattah had been detained several times before under different governments for lobbying for civil rights on social media and in public. An influential blogger, he hails from a family of political activists, lawyers and writers. His late father was one of Egypt’s most tireless rights lawyers and his sisters are also political activists. His aunt is award-winning novelist Ahdaf Soueif.

To many, Abdel-Fattah's imprisonment in 2013 after el-Sissi rose to power — at a time when authorities imposed draconian laws banning public gatherings and unauthorized demonstrations — was another sign of Egypt’s return to autocratic rule.