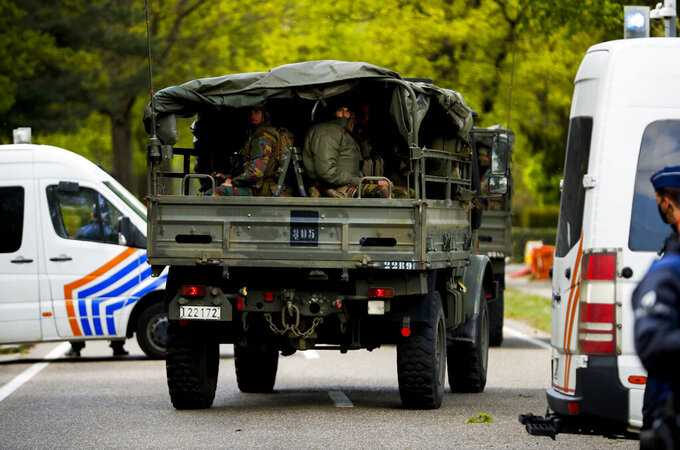 Belgian military arrive at the entrance of the National Park Hoge Kempen in Maasmechelen, Belgium, Friday, May 21, 2021. Specialized forces on Friday continued their manhunt for an armed soldier who is on a Belgian anti terror watch list because of his extreme right sympathies but was still able to hoard heavy arms in army barracks before disappearing early this week. (AP Photo/Francisco Seco)

BRUSSELS (AP) — Hundreds of specialized forces kept hunting Friday for a heavily armed Belgian soldier who is on a federal anti-terror watch list and was seen early this week near the home of a person he had threatened.

Jurgen Conings, 46, an expert marksman known for his extreme-right sympathies, was still thought to be hiding in a vast nature park in northeastern Belgium that over 400 soldiers and police officials have combed for three straight days.

Justice Minister Vincent Van Quickenborne said the man disappeared Monday and hung around the residence of one of several people he threatened before boobytrapping his own car with ammunition and four anti-tank missile launchers inside.

“It is clear the man is armed and dangerous and that he said he had dangerous plans,” Interior Minister Annelies Verlinden told broadcaster VRT. “Over the coming hours and days, operations to catch him will continue.”

The pandemic has polarized opinion in many European nations, and Van Ranst previously had received death threats, including from Conings.

The fugitive run by the experienced solider embarrassed the Belgian government. Conings, who had been on the anti-terror watch list for three months, was able to hoard heavy weapons in army barracks before disappearing this week.

Conings had a three-decade career behind him as a sniper and expert marksman before he started making threats and racist remarks on Facebook that earned him disciplinary sanctions. He remained authorized to work with arms.