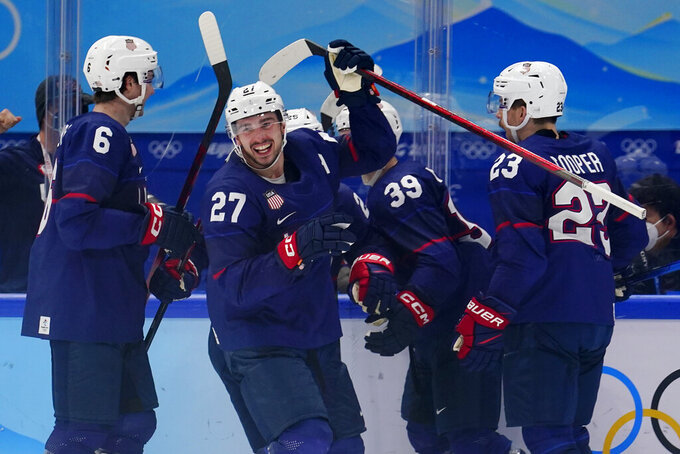 United States' Noah Cates (27) celebrates after scoring a goal against China during a preliminary round men's hockey game at the 2022 Winter Olympics, Thursday, Feb. 10, 2022, in Beijing. (AP Photo/Matt Slocum)

BEIJING (AP) — Don’t look now, but the young United States hockey team might be fun to watch at the Olympics.

Sean Farrell had a hat trick and delivered one of the team's two no-look assists as the Americans routed China 8-0 Thursday night in the host country's Olympic men's hockey debut.

Farrell delivered his behind-the-back pass from behind the net to Noah Cates and also scored the fourth, fifth and eighth U.S. goals. Andy Miele delivered another no-look assist on Brian O'Neill's goal, Minnesota center Ben Meyers roofed a backhander, and Matty Beniers flashed the offensive ability that made him the second pick in the NHL draft with his goal.

“We all got our feet wet, scored a lot of goals, didn’t let up anything,” said Brendan Brisson, who opened the scoring on the power play midway through the first. “A great start, and we’re just going to be rolling into Canada now.”

After a slow start, the young Americans’ speed and skill were on display and eventually wore down their overmatched opponent. The U.S. outshot China 55-29.

"It was busy in my end, but that was to be expected," said U.S.-born goaltender Jeremy Smith, who kept it close the first half of the game for China and finished with 47 saves. There was little he could do on Brisson’s goal or on Cates’ shot from in front in the second that made it 2-0.

Farrell's no-look pass stood out as the highlight in a game full of them for the U.S.

“I knew one of us was going to be out front, so I just threw it there,” said Farrell, who led the U.S. with five points. “Fortunately, Catesy, it ended up right on his stick and he buried it, so it was a great little play by our line.”

Skating in front of about 1,000 Chinese fans, the home team made up mostly of North American players who naturalized for the Games hung tough before the Americans broke through three times in the second and four more times in the third.

“It’s a great experience,” said U.S.-born China defenseman Jake Chelios, whose dad Chris has a silver medal from the 2002 Olympics. “Obviously that’s not the result you want, but at the end of the day, all of us got a chance to play in the Olympics. The last few years, this is the day we’ve been working for.”

Boston University goaltender Drew Commesso was not tested much but was sharp when he needed to be, making 29 saves for the shutout. The 19-year-old became the youngest U.S. goaltender to play at the Olympics.

“There were some tough saves,” U.S. coach David Quinn said. “They did a great job getting to the net. They’re big bodies, they got pucks to the net quickly, so he had to fight his way through traffic and I thought he did a really good job of that.”

Seven of the eight U.S. goals were scored by a player currently in college.

“It says a lot about how good the NCAA is,” said Farrell, who plays at Harvard and is a Montreal Canadiens prospect. “I think stepping into a tournament like this with a lot of older guys, the college play definitely prepared all of us for it.”

The other goal came from O'Neill, the lone returnee from the 2018 tournament in Pyeongchang when the U.S. was eliminated in the quarterfinals in a shootout loss to the Czech Republic.

Even without Auston Matthews, Patrick Kane and a generation of elite American talent, the expectations are higher this time around. Blowing out China reveals little about what the U.S. can do in the tournament, though it was a strong start.

“It’s just getting used to the pace of the play, how physical that game was,” Beniers said. “It was more physical than probably a lot of us have played before. And (it showed) who we are as a team and what we’re made of.”

The U.S. next faces archrival Canada, which beat defending silver medalist Germany 5-1 in its tournament opener. That showdown is set for Saturday afternoon in Beijing before the U.S. plays Germany on Sunday night in its final preliminary round game.