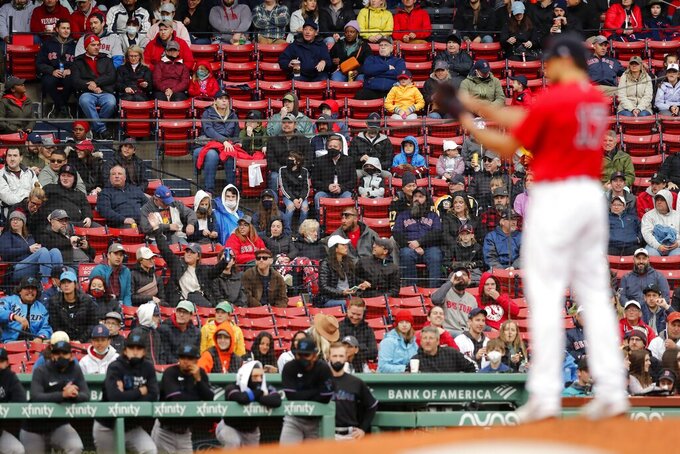 Fans watch as Boston Red Sox's Nathan Eovaldi, foreground, pitches during the first inning of a baseball game against the Miami Marlins, Saturday, May 29, 2021, in Boston. Saturday marks the end of most COVID-19 restrictions in Massachusetts. (AP Photo/Michael Dwyer)

BOSTON (AP) — Playing their first game in a rejuvenated Fenway Park since the state dropped limits on crowds during the coronavirus pandemic, Nathan Eovaldi went 5 1/3 scoreless innings and the Boston Red Sox beat the Miami Marlins 3-1 on Saturday.

Bobby Dalbec, Kevin Plawecki and Hunter Renfroe each had an RBI single for Boston, which won for the seventh time in nine games and posted its ninth straight home victory over the Marlins.

There was a lot more buzz in the fabled park, with the fans roaring after the national anthem and cheering loudly when Eovaldi fired a fastball past the swing of Magnerius Sierra, the game’s first batter.

Despite drizzly, chilly weather, the stands were about half full and the crowd broke in a chant of ‘"Let’s go, Red Sox!" that echoed around in the first inning from the announced paid attendance of 25,089.

Eovaldi (6-2) allowed four hits, striking out seven with one walk.

“It was awesome,” he said of the crowd. “They were definitely bringing the energy. You could definitely tell the excitement was there in the stadium.”

“I think the crowd was what made it different than its been,” Ottavino said. “Just a lot of energy in the moment, especially once I got to two strikes on the last guy. Just kind of an out-of-body experience. Glad I was able to make the pitch. I just kind of blacked out.”

Matt Barnes got the final three outs for his 12th save in 13 chances despite giving up Aguilar’s RBI single.

“We had the right guys up there, we just weren't able to get the big hit,” Marlins manager Don Mattingly said.

“They were loud. I heard it for sure,” Rogers said. “The atmosphere was crazy. It was a really good atmosphere to pitch in. It was a lot of fun.”

Red Sox manager Alex Cora missed the game and was back home in Puerto Rico, attending the high graduation of daughter Camila. Bench coach Will Venable ran the team.

Dr. Rochelle Walensky, director of the Centers for Disease Control and Prevention, threw out the ceremonial pitch to Boston catcher Christian Vázquez, tossing a high arc from just in front of the mound. She said she warmed up in her backyard in nearby Newton.

“It’s such a bright moment right now,” she said. “Having been here, March 6, 2020, was the first call I received when we had our first case in Boston and our first case in Massachusetts. … It’s been a really long year, and we’ve seen some really, really dark times. … I’m cautiously optimistic, but I’m not declaring victory.”

The Red Sox were following CDC guidelines and fans that were fully vaccinated were not required to wear masks.

THAT’S HOW IT LOOKED

It was the first time since the final game of 2019, when the Red Sox beat Baltimore in front of a crowd of 35,427, they were able to open to full capacity.

Red Sox: Kennedy said: “the honest answer is, yes, it’s frustrating, but we’re respectful of individual choice” when asked if it was disappointing that the Red Sox hadn’t reached the threshold of 85% or more of their Tier 1 individuals being considered fully vaccinated.

Miami RHP Sandy Alcantara (2-4, 3.46 ERA) is set to face LHP Eduardo Rodriguez (5-3, 5.06), who is coming off his shortest outing this season when he lasted just four innings in his previous start.