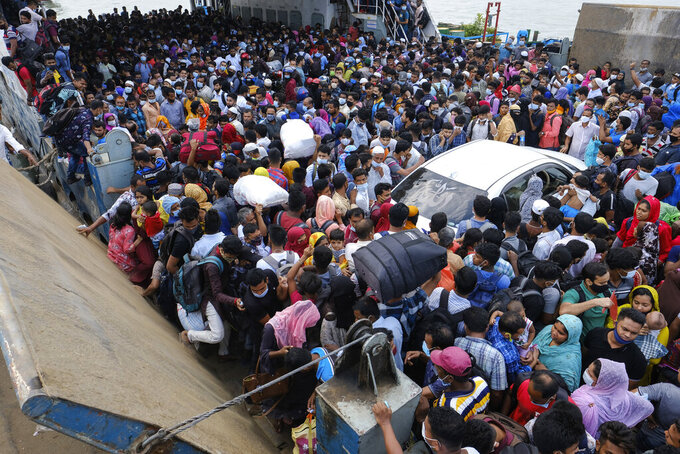 Thousands of people leaving for their native places to celebrate Eid-al-Fitr crowd a ferry at the Mawa terminal ignoring risks of coronavirus infection in Munshiganj, Bangladesh, Thursday, May 13, 2021. (AP Photo/Mahmud Hossain Opu)

DHAKA, Bangladesh (AP) — Tens of thousands of people left Bangladesh's capital on Thursday to join their families in home villages to celebrate the Islamic religious festival of Eid al-Fitr, despite stark warnings that the exodus could worsen the country's sharply rising coronavirus outbreak.

People crowded exit points in Dhaka, defying a nationwide lockdown in effect until Sunday and a suspension of long-distance passenger buses, trains and ferries.

Authorities urged citizens not to congregate to offer special prayers for the festival on Friday and instead pray in phases in the country's more than 300,000 mosques while following health guidelines.

Barricades and police posted on highways and at ferry terminals failed to stop the exodus on Thursday marking the end of the monthlong fasting month of Ramadan.

Many people walked or took risky rides in the back of produce trucks or small motorized vehicles to get to local ferry terminals to cross the mighty rivers. At least five people have died in stampedes since Wednesday when people packed ferries beyond their capacity. On Thursday, the body of a sixth person was retrieved from the water after a car fell into a river as it hurried to get a space on a ferry.

Shila Akhter, an employee at a private company, said she was desperate to join her family.

“As Muslims, we should celebrate Eid with our families,” she said. “Dhaka is the place of work for many of us. We work for the whole year. So, once in a year, we need to go home to our children and parents. They’re the reason I’m going home.”

On Monday, the World Health Organization designated a new virus version isolated in India a “variant of concern” based on preliminary research, alongside ones that were first detected in Britain, South Africa and Brazil.

In Bangladesh, the South African variant is already widely present and the U.K. variant has also been detected.

Viruses mutate constantly, and a surge in infections in a country could result in more opportunities for new versions to emerge.

“No matter what variant is here, the issue is whether our people are wearing masks and avoiding crowds,” said S.M. Alamgir, a senior scientific officer at the government’s Institute of Epidemiology, Disease Control and Research.

“Risks are there to spread the virus because of the holiday rush,” he said.

The country suspended administration of second doses of vaccine for three days as the holidays began Thursday, but it will still have to skip about 1.4 million people because of a vaccine shortage.

The crisis began when India banned exports of the AstraZeneca vaccine produced by the Serum Institute of India because of its own devastating surge in infections.

Bangladesh has received only about 7 million doses from the Serum Institute despite a deal for it to supply 30 million doses by June. Bangladesh was forced to suspend administering first doses of vaccine on April 30.

On Wednesday, China sent 500,000 doses of its Sinopharm vaccine to help Bangladesh cope with the shortage. Bangladesh has also signed a deal with Russia to produce the Sputnik V vaccine locally.