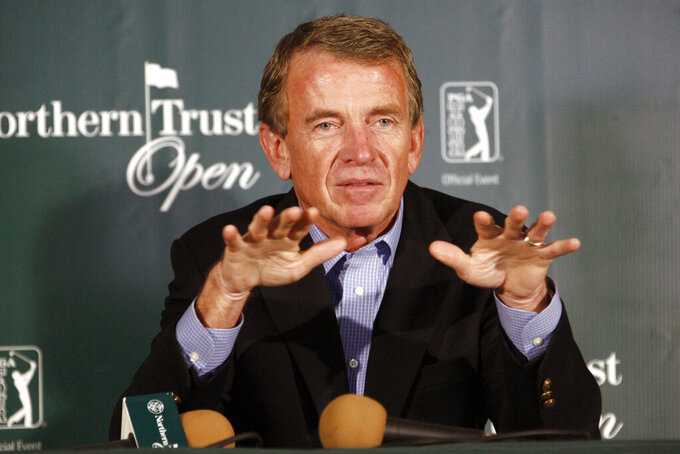 FILE - In this Feb. 3, 2010, file photo, PGA Tour Commissioner Tim Finchem gestures at a news conference on the Pro-Am day of the Northern Trust Open golf tournament at Riviera Country Club in the Pacific Palisades area of Los Angeles. Finchem, who expanded the PGA Tour’s footprint around the world and negotiated TV contracts that more than tripled prize money during his two decades as commissioner, has been elected to the World Golf Hall of Fame. (AP Photo/Reed Saxon, File) 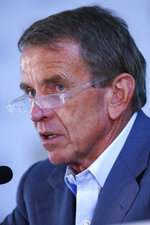 Tim Finchem, who expanded the PGA Tour’s footprint around the world and negotiated TV contracts that more than tripled prize money during his two decades as commissioner, has been elected to the World Golf Hall of Fame.

Finchem was elected through the contributor category and will become the 10th administrator to be inducted, joining predecessor Deane Beman.

He was PGA Tour commissioner when the World Golf Hall of Fame opened in 1998 in St. Augustine, Florida.

“One of the great things about that is to get know the inductees who I didn't know in other aspects of my job,” Finchem said Monday. “It's a tremendous list of people. To be included in that group is very powerful. I want to thank those who thought I was deserving of it. In many ways, I didn't feel I am deserving because I just had so much fun being in the job for so long.”

Finchem found it fitting that he joins the induction class of 2021 with Tiger Woods, whom he first saw at a college tournament his first year as commissioner in 1994. Later that year, Finchem noticed players finishing up their rounds at the World Series of Golf at Firestone and watching an 18-year-old Woods win the first of three straight U.S. Amateurs.

Woods was elected through the male player category a month ago. Marion Hollins, one of the leading women in golf a century ago, was elected as a contributor.

“I am especially proud to stand alongside one of the world’s all-time greats, Tiger Woods, in the Class of 2021 and look forward to what will be an exciting year ahead," Finchem said.

Woods joined the PGA Tour in 1996 after two years at Stanford and brought enormous attention to himself and to the tour. Along with winning twice in seven starts, Woods won the Masters in his first attempt as a pro by setting 20 records, including a 12-shot victory that set off the first wave of “Tigermania.”

Finchem seized on it.

He was in the middle of negotiating a new network television contract, and prize money spiked. More deals followed in 2001, 2006 and 2012. PGA Tour prize money went from under $100 million on three tours in 1994 when Finchem was appointed commissioner to more than $400 million over six tours when he retired at the end of 2016.

Finchem laughed Monday when asked what his job would have been like had Woods played tennis.

“It would have been a much more difficult job,” he said. “Tiger coming on the scene ... took our sport to another level. It continues on today. As a sport, we were blessed he didn't like tennis.”

It wasn’t just money, however.

Finchem created The First Tee program shortly after Woods won the Masters. Turning back Greg Norman’s proposal for a world tour, Finchem came up with the World Golf Championships series in 1999 that led to three events for players from the leading six tours around the world. He also took advantage of a growing class of international players from outside Europe — Norman, Nick Price, Ernie Els, Vijay Singh among those — by starting the Presidents Cup in 1994.

Along with trying to get golfers paid like other athletes, Finchem tried to reshape the season to give it a more defined finish. He created the FedEx Cup in 2007, a separate competition at the end of the year that paid $10 million — an amount now at $15 million — to the winner.

At the heart of his work was making the PGA Tour logo recognizable around the world, a symbol of strength.

The PGA Tour had a developmental circuit now called the Korn Ferry Tour and the PGA Tour Champions for players 50 and older. Now it has circuits in Canada (Mackenzie Tour), Latin America and China.

“Tim Finchem’s vision and leadership have made an indelible impact on the game of golf over the past 25 years,” said Jay Monahan, whom Finchem groomed as his successor.

Monahan delivered the news to Finchem during The Players Championship, two days before golf joined so many other sports in shutting down because of the COVID-19 pandemic.

Some of Finchem's best work came during tough times. He kept the PGA Tour fully sponsored during the recession in 2008 and kept prize money from shrinking as a show of strength.

The Hall of Fame is expected to announce a fourth inductee later this week.