Firmino out and Paquetá in for Brazil's Copa America opener 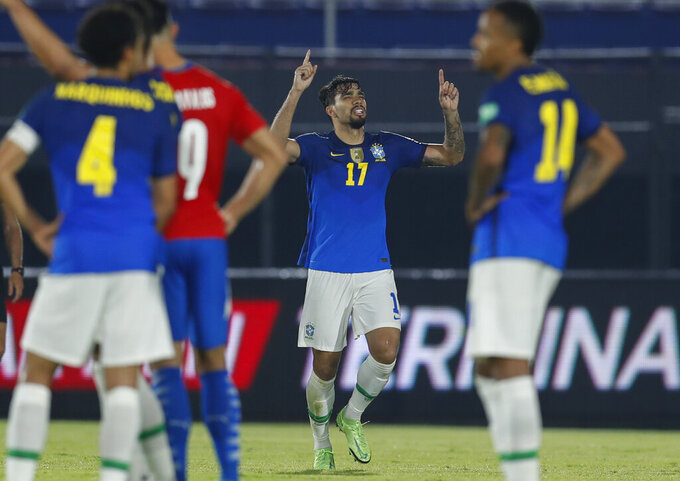 SAO PAULO (AP) — Brazil is starting Lucas Paquetá up front instead of the experienced Roberto Firmino against Venezuela in their Copa America opener on Sunday, coach Tite said.

Goalkeeper Alisson is also replacing Ederson, and left back Renan Lodi is in for Alex Sandro to face an adversary that has been ravaged by COVID-19 in the latest 24 hours.

Brazil is the emergency host of a troubled Copa America which starts on Sunday after original hosts Colombia and Argentina were pulled.

The Seleção-Venezuela opening match is at Mané Garrincha Stadium in Brasilia.

Paquetá, who plays for Lyon, scored Brazil's second goal in a 2-0 win at Paraguay in a World Cup qualifier this week. Firmino started that game, but his performance was far from impressive, as in recent matches for Brazil.

Tite added on Saturday that he's starting Gabriel Jesus, Richarlison and Neymar as forwards — all three can play on the wings and as target men. Paquetá is expected to play as a midfielder.

The coach revealed he asked the then president of the Brazilian confederation, Rogério Caboclo, not to stage the Copa America before it was even assigned to Brazil as an emergency host. Caboclo was suspended on June 5 due to a separate sexual harassment claim.

“I asked, the athletes asked, (the coordinator of the national team) Juninho asked before it was decided it would be played in Brazil. We were loyal,” an unusually outspoken Tite said. “Before it was taken to the president (of Brazil), to the country, we said we wouldn't like (to play).

“They asked us for some time, then they decided, and we got exposed.”

Brazilian media has reported some players considered boycotting the Copa America because of the pandemic in Brazil, but others focused on disagreements with Caboclo. The Brazil players agreed midweek to play, but criticized organizers.

Venezuela summoned 15 new players at the last minute after eight tested positive for COVID-19 on Saturday, a day before the match against Brazil. Coach José Peseiro said he has no idea who will play. Another three members of the coaching staff were also infected. None were named.

The Copa America is divided into two groups of five teams. Group A includes Argentina, Bolivia, Uruguay, Chile and Paraguay. Brazil is in Group B with Colombia, Venezuela, Ecuador and Peru. The four best of each group advance to the knockout stage.