Fit for a swing: Meet the new DHs of the National League 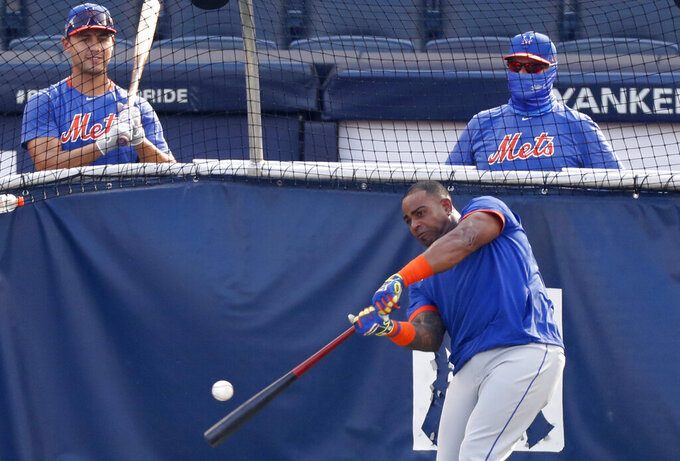 The minute word leaked that the designated hitter was coming to the National League this season, fans and front offices alike began pinpointing the perfect candidates.

Whether it be an aging slugger returning from injury or a younger hitter who’s not so good with the glove, nearly every NL team has a player who fits the profile: dangerous stick, suspect defense. A natural choice to bat for the pitcher and not play the field.

Suddenly there’s an ideal spot in the starting lineup available to those guys, now that the DH has spread beyond the American League under new rules adopted for a postponed season shortened to 60 games because of the coronavirus.

It all starts without fans on hand Thursday night in Washington, where the World Series champion Nationals host the New York Yankees. Probably with Eric Thames or Howie Kendrick becoming the first designated hitter for an NL squad playing a regular-season game in its home ballpark.

“I think the biggest thing for a DH is to be able to stay locked into the game as much as possible,” said Schwarber, a converted catcher with limitations in left field who had 38 homers, 92 RBIs and an .871 OPS for the Chicago Cubs last year.

But while Schwarber figures to get the bulk of DH duty in Chicago, other clubs like Milwaukee and Miami plan to fill the role with a variety of hitters. That way, it helps everyone stay fresh -- especially the big boppers.

The deep Los Angeles Dodgers get an additional slot to plug in good players such as Joc Pederson, Chris Taylor, A.J. Pollock, Matt Beaty and Kiké Hernández who might otherwise be on the bench.

Cincinnati, with Jesse Winker and others, can ease its overcrowded outfield.

“It enables us to put more of our better players in,” Marlins manager Don Mattingly said. “It will enable us to mix and match a little more with our lineup. We don’t have Big Papi sitting there. I do look at that as using a rotation. For us, it makes it easier to make a lineup out. You feel like you’re getting all your guys in there.”

Though the American League has been employing the designated hitter since 1973, it remains to be determined if the NL will incorporate it again after this unusual season.

Some other National League teams with notable DH situations:

Yoenis Céspedes is back after missing last season and most of 2018 with leg and foot injuries. He had surgery on both heels and then for a broken ankle, so it’s uncertain how well he could hold up in left field. But the 34-year-old slugger looks strong enough to pose a threat at the plate in a dangerous lineup.

“The way that my body is feeling right now, the way that I’ve been able to run, I feel so much better,” Céspedes said this month.

If he’s healthy enough to play the outfield on occasion -- or unable to even DH -- the Mets have several other suitable possibilities in Dominic Smith, J.D. Davis and Robinson Canó.

“We feel like our lineup can be as deep as anybody’s in baseball,” general manager Brodie Van Wagenen said. “So we’re looking forward to utilizing the DH spot to both protect our guys’ health and to put up some offensive force.”

The 36-year-old Braun seemed an obvious pick, but manager Craig Counsell said he won’t have a regular DH and instead planned to alternate players -- including star outfielder Christian Yelich. Braun also was mentioned, but he sat out the team’s first five intrasquad games in summer camp, raising questions about his availability.

“At this age and where I’m at in my career, it’s very appealing to me to have the option to DH for a decent percentage of my at-bats,” Braun said.

The 33-year-old Bruce has bounced around since 2016 and probably isn’t an appealing outfielder anymore. But the three-time All-Star had 26 homers and a .523 slugging percentage in 310 at-bats with Seattle and Philadelphia last season.

Jake Lamb, an All-Star in 2017, is looking to rebound from consecutive seasons derailed by injuries. He batted only .193 with six home runs and 30 RBIs in 78 games last year.

The slot could also make sense for 27-year-old Kevin Cron, who clocked 38 homers in Triple-A last season. At 6-foot-5, 250 pounds, he added six more long balls in the majors over 71 at-bats.

A pair of popular additions in Hunter Pence and Wilmer Flores figure to be in the mix. The 37-year-old Pence, who won two World Series rings with the Giants from 2012-18, made his fourth All-Star team last season as a DH for Texas. He batted .297 with 18 homers, 59 RBIs and a .910 OPS in just 83 games.

Flores can play all over the infield but is better with the bat. He hit .317 with an .848 OPS in 89 games for Arizona last year.