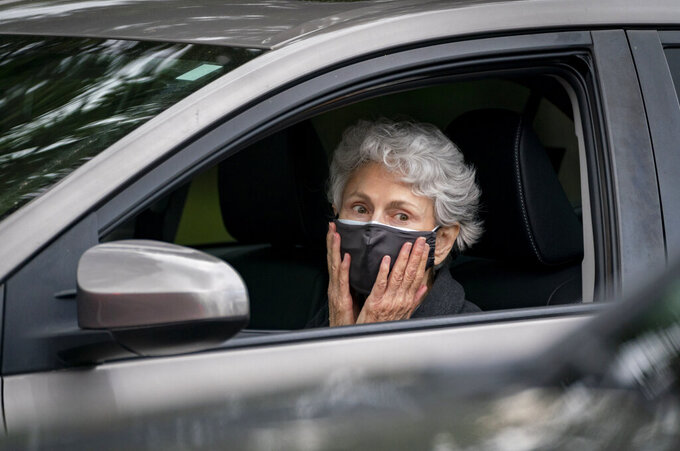 Century Village resident Christine Zuzze waits in line to make an appointment for the COVID-19 vaccine in West Palm Beach, Fla., on Monday, Jan. 11, 2021. The community will receive 3,000 doses to use starting on Wednesday. (Greg Lovett/The Palm Beach Post via AP)

FORT LAUDERDALE, Fla. (AP) — Florida’s coronavirus cases remain at record highs as more than 11,000 new cases were reported Monday along with 163 deaths as the rollout of the state's vaccination program continues.

The Florida Department of Health reported 11,576 new cases as the seven-day average for the state is about 15,000 per day. That is about 40% higher that the previous peak of 11,000 reached in July. There were 7,650 people hospitalized in Florida with COVID-19 on Monday morning, a jump of about 150 from Sunday.

The state has reported approximately 140 coronavirus deaths per day over the last week — the weekly average peaked at 183 per day in August, but had fallen to 40 in November before the latest rise began. Increases in the death rate usually follow jumps in cases by about a month.

For comparison, heart disease and cancer, the state’s two largest causes of death by far, each kill an average of about 125 Floridians per day.

The jumps in cases and deaths come as the state tries to roll out its vaccination program — Gov. Ron DeSantis has emphasized immunizing those 65 and older, front-line medical workers and nursing home patients.

“The fact of the matter is this virus has been more deadly to the people who are elderly. We’ve got to stand by our elderly folks. We understand the data, we understand where the risk is. We’re going to focus on seniors first,” DeSantis said over the weekend as he visited a vaccination clinic at a Panhandle senior center.

Dr. Martin Makary, a researcher, surgeon and professor at Johns Hopkins University, praised DeSantis for prioritizing Florida’s seniors, saying giving the vaccine to older residents first is a simple system that is easier to follow than using other formulas that combine various risk factors. He said Florida’s prioritization system should be a model for other states.

But there have been problems in getting the vaccine to seniors. Around the state, online and phone systems for signing up for the vaccination have crashed under the strain of thousands trying to access the systems at once. U.S. Rep. Debbie Wasserman Schultz said DeSantis and his administration needed to plan better for the rollout, which began last month after months of anticipation.

“How are we going to inspire confidence in people getting the vaccine if you aren’t even able to clearly coordinate and explain to them how they can get it?” the Broward County Democrat told The Miami Herald.