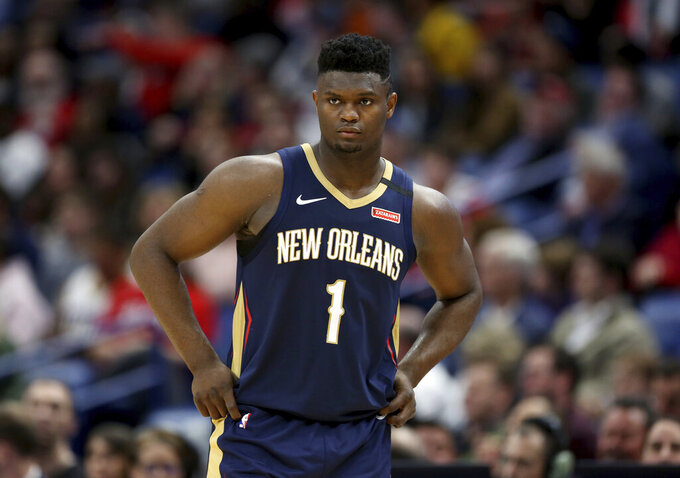 FILE - In this March 6, 2020, file photo, New Orleans Pelicans forward Zion Williamson walks onto the court during the second half of the team's NBA basketball game against the Miami Heat in New Orleans. A Florida appeals court has granted Williamson’s motion to block his former marketing agent’s effort to have the ex-Duke star answer questions about whether he received improper benefits before playing for the Blue Devils. The order Wednesday shifts the focus to separate but related case between the same litigants in federal court in North Carolina. (AP Photo/Rusty Costanza, File)

The coronavirus numbers kept climbing Thursday, with a single-day record for new cases being set in Florida and the NBA revealing that the count of players and staff from the 22 remaining teams that have confirmed diagnoses of COVID-19 continues to grow.

The NBA numbers: nine more positive players from tests conducted between June 24-29 to bring the total to 25 who have been positive since mandated testing began June 23, as well 10 positive-testing staff members from the teams that will start arriving at the Disney complex near Orlando, Florida next week for the resumption of the season.

And statewide, health departments around Florida got more than 10,000 new positive cases back on Wednesday, a single-day record for a state that remains very much under siege from the virus and likely a troubling sign for the NBA — which remains hopeful that highly restrictive rules at Disney will keep players and staff safe.

“It’s so much uncertainty,” San Antonio guard DeMar DeRozan said Thursday. “Name me a player who can give you an answer on anything. I wish I could give you an answer. It’s tough, man. It’s tough. I sit up here and tell guys on my team we’ve just got to take things day by day, because it becomes overwhelming and frustrating at times when you try to look at the whole spectacle of things and try to figure it out.”

Percentagewise, the NBA numbers are much lower than the rate of positive tests in many hotspot areas, including the average in Florida. With 351 players tested through June 29, the league had 25 positives for a 7.1% rate. Among 884 team staff tested between June 23 and June 29, the rate was minuscule — the 10 positives equate to a mere 1.1% positive rate.

Under NBA policy, “any player, coach or team staff member who tested positive will remain in self-isolation until they satisfy public health protocols for discontinuing isolation and have been cleared by a physician.”

Still, it is an issue that, as NBA Commissioner Adam Silver has said many times, the league cannot outrun. Thursday marked the 113th day since the league suspended its season after Utah’s All-Star duo of Rudy Gobert and Donovan Mitchell tested positive; they may have largely recovered physically, but there is still clearly a strain in the relationship, something Mitchell discussed in a teleconference Thursday.

“I wasn’t happy in the beginning,” Mitchell said. “I’ve said that publicly. It’s no secret. ... And on top of that, it really took away from like what guys were working on. We’ve talked about what we’ve been working on for the past two months, and I feel like that’s really been hijacked because of this whole thing.”

As the numbers rise, the games get closer.

At Disney, preparations continued for the arrivals that start on Tuesday. Practice courts have been put into place in what typically are hotel ballrooms. The arenas that will play host to games are being set up for NBA needs, and some staff were getting set to arrive to begin their quarantines.

“I trust the NBA, and the bubble,” New Orleans rookie Zion Williamson said. “We’re going to be in a safe environment. We’re taking advice from certain situations. It’s crazy — we’re actually about to go. It’s a lot to process, but I am excited.”

So is Los Angeles Lakers forward Anthony Davis, whose team is going to Disney with serious title hopes.

That said, Davis is also very aware of what’s happening with the numbers.

“For the safety of the league, for the safety of all the players and the people there, I think everyone would be mindful of following the rules,” Davis said. “Obviously, the numbers are spiking in Orlando and I don’t think anyone wants to get COVID — so I don’t think that guys will put themselves or other players and staff that’s going to be in the bubble in jeopardy. I know the NBA and Adam Silver talked about doing as much as they can to keep the bubble as safe as possible. I trust in them.”