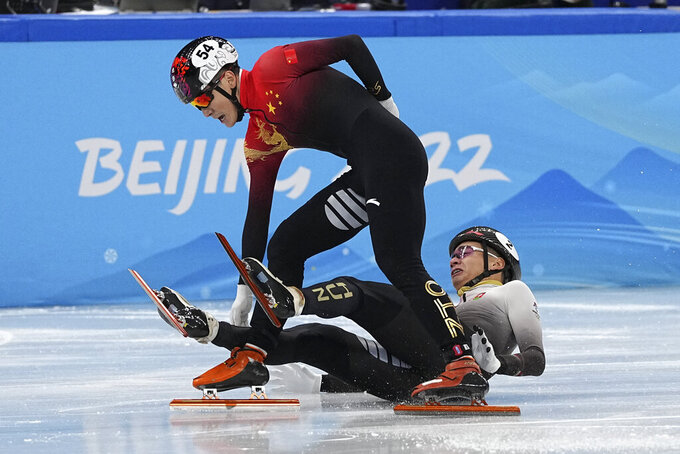 Ren Ziwei of China, and Shaolin Sandor Liu of Hungary, clash as they cross the finish line in the men's 1000-meter final during the short track speedskating competition at the 2022 Winter Olympics, Monday, Feb. 7, 2022, in Beijing. (AP Photo/David J. Phillip)

BEIJING (AP) — Arianna Fontana burnished her legacy as short track’s most decorated skater with her second Olympic medal in Beijing and 10th of her career.

Her victory in the 500 meters on Monday wasn't all good feelings, though. It laid bare an ongoing rift between the 31-year-old athlete and Italian skating officials who apparently don't want her American husband coaching her.

Fontana took the lead from world champion Suzanne Schulting late in the race and let out a yell as she crossed the line in 42.488 seconds.

Her scream wasn't in celebration as much as it was a release of the anger she's been carrying since returning from a year's break after the 2018 Olympics. Fontana won gold four years ago, but it was made clear that her husband and former U.S. short track skater, Anthony Lobello Jr., wasn't welcome as her coach.

“I'm kind of overwhelmed with a lot of different emotions — happy, relieved,” Fontana said. “I don’t usually yell, but it was a way to let it out, all that anger.”

Italian federation officials passed Fontana in the hallway after her victory and didn't offer congratulations.

“I wasn’t looking for them to come up to me,” she said. “It’s actually better if they stay away.”

Fontana left Italy for a time and went to Hungary to train before returning home.

She won a silver in the inaugural mixed team relay on Saturday, putting her ahead of Viktor An and Apolo Ohno for career medals with nine.

Fontana was already the only athlete to win a medal of every color in the same individual event. She won gold in the 500 four years ago at the Pyeongchang Games, silver in Sochi in 2014 and bronze in Vancouver in 2010.

“When I was a little kid I just wanted to go to the Olympics and win a gold medal,” Fontana said. “Now I have two and eight more medals. It’s incredible.”

Schulting took silver in 42.559 and Kim Boutin of Canada earned bronze in 42.724. Both women embraced Fontana afterward in a group hug.

The men's 1,000 final was full of the kind of moments that skaters often explain by shrugging and saying, “That's short track.”

It was restarted in the middle of the race to remove metal debris on the ice and repair a rough spot just past the finish line.

The Chinese-only crowd had plenty to cheer for in the final. Three of the skaters were Chinese and the Liu brothers from Hungary — Shaolin Sandor and Shaoang — have a Chinese father and Hungarian mother.

Liu Shaolin Sandor crossed the line first, fell and spun into the pads while raising his arms in triumph.

But he was too quick to celebrate. Liu and the other skaters had to wait several minutes while the referee sorted through the chaos. Liu put his hands together in a gesture of prayer while awaiting the final ruling.

Liu was penalized twice and earned a yellow card. That elevated Ren Ziwei of China, who crossed second, to the gold medal. It was the host country's second gold in short track. China won the mixed team relay for the nation's first medal of these Games.

“Basically, the video told everything,” Ren said through an interpreter.

Liu Shaolin Sandor didn't stop to speak with reporters afterward, angrily striding past them. The brothers hugged on the ice and Liu Shaoang counseled his older brother afterward.

“I told him you have to forget this,” Liu Shaoang said. “We still have racing days. We’re both looking forward. It’s short track, anything can be happening.”

It was quite a night for Liu Shaoang, who crashed on the last lap in the semifinals but was advanced to the final when another skater was penalized for a lane change that caused contact.

In the quarterfinals, Park Janghyuk of South Korea was carted off the ice on a stretcher. He had been advanced to the semifinals, but didn't skate because of his injury.

American Andrew Heo finished third in the B final of the 1,000.

In the women's 500, neither American advanced out of the quarterfinals. Kristen Santos crashed and was penalized for a lane change, while Maame Biney finished third in her heat and only the top two skaters moved on.