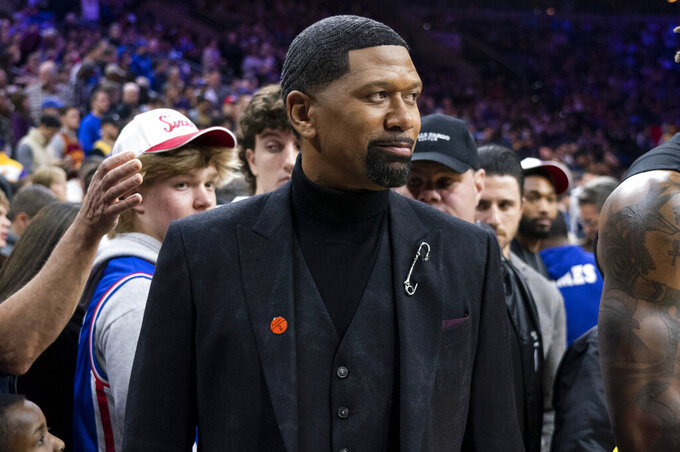 FILE - In this Jan. 25, 2020, file photo, ESPN analyst Jalen Rose looks on prior to an NBA basketball game between the Los Angeles Lakers and the Philadelphia 76ers in Philadelphia. In a week in which racial injustice took center stage following the events in Wisconsin, Black sports media personalities came to the forefront with their views and drove dialogue not seen on many other platforms. While Chris Webber and Rose said the conversations were meaningful, it wasn't the first time. (AP Photo/Chris Szagola, File)

Chris Webber's emotional comments last week in support of NBA players, who boycotted the playoffs after the shooting of Jacob Blake, generated millions of views because they came from the heart and addressed sensitive topics.

But for Webber and other Black commentators who discussed this week’s call to action throughout the sports world, it wasn't unusual to discuss such subjects. The only difference is that this time he spoke in front of a live TV audience.

“These are conversations I have had with my mom since I’ve been 5 years old. This is nothing I haven’t said a thousand times before, but no one heard it,” Webber said by phone from the NBA bubble at Walt Disney World in Florida. “These are the same conversations and hopefully something gets done.”

On-air conversations about race have been common in sports media because it is more diverse, particularly with more Black on-air talent, than the rest of the news media, where many organizations have pledged this year to hire more minorities. Former athletes have a pipeline to advance into sports media as commentators, and many popular shows feature a Black man or woman as a host.

Amid a dizzying week of news that included the Republican National Convention, the coronavirus pandemic and protests following the shooting of Blake by a police officer in Kenosha, Wisconsin, sports networks devoted large chunks of their programming to discussions of social and racial injustice. Boycotts by players in several leagues — games canceled in the NBA, NHL, Major League Baseball and Major League Soccer, and NFL players not practicing — presented an opportunity for sports on TV to deviate from the usual script.

Those conversations took different forms. TNT’s Kenny Smith showed solidarity with players by walking off the “Inside the NBA” set on Wednesday. On Thursday, NFL Network was slated to air the Los Angeles Chargers' first workout at SoFI Stadium. Instead, it turned into a forum for players to express their feelings about racial and social issues after practice was canceled.

Talk shows on ESPN and FS1, normally devoted to debates about teams, players and coaches, became forums to discuss experiences with racism.

“I have young nephews and I’ve had to talk to them about death before they’ve even seen a movie,” Webber said in his comments on TNT on Wednesday.

CBS studio host James Brown, who has been a part of network television for 36 years, said his conversations with players and executives have shown that athletes feel like they're at a crossroads.

“They don’t get the impression that anything significant is being done by leadership across the country and that they’re not serious about changes,” Brown said. “Athletes also feel a moral obligation to represent the marginalized and to advocate strongly for that until they see serious changes.”

Former NFL linebacker Emmanuel Acho has tried to create some of those changes himself. Along with interviewing athletes on FS1's “Speak for Yourself,” he has started a YouTube series called “Uncomfortable Conversations with a Black Man.” Acho is scheduled to release a book with the same title in November.

“There are topics that can be intimidating for others, but for me, being able to address them is the most fulfilling,” Acho said. “I’ve seen a lot of encouraging discussions throughout different shows this week. You have to tackle issues that pertain to everyone’s lives. You are talking about life and death, not wins and losses.”

ESPN commentator Jalen Rose, who was Webber’s college teammate at Michigan, said conversations about social justice and race relations can be emotionally and physically draining, but he believes they are signs of progress.

“To use a sports analogy, I look at it as trying to gain field position. If you look up at the scoreboard it is 465 years (since slavery) to zero and it’s the first quarter and you know you aren’t going to win the game, but you have to go out there and play your best and move the ball forward for the people that come behind you,” Rose said. “You might get four or five first downs and then get a pass interference call but when you punt you are still gaining field position. It has to be about the marathon and the long game which can be frustrating but those are the cards we’ve been dealt.”

Brown, who also hosts the NFL Broadcasting Boot Camp for players each year, said current and former athletes are getting more respect and attention when they speak about issues outside sports.

“It’s hurtful — because I am an older athlete — to say all we can do is play ball and not be engaged. We’re husbands and grandfathers. To marginalize athletes is wrong. The nexus between sports and civic action is there,” Brown said.

Brown added that athletes who speak out need to be articulate, informed and mindful that their words have staying power.

It was just two years ago that Jimmy Pitaro took over as president of ESPN and issued a “stick to sports” edict for the network's on-air talent. But the interpretation of those words has evolved. When social unrest intersects with sports, ESPN won't ignore the topic.

For Rose, the era of athletes sticking to sports is over — in part because President Donald Trump hasn’t been shy about criticizing NBA and NFL players who disagree with him.

“If he’s acknowledging NFL players who are kneeling and he says, ‘They deserve to be fired,’ that now becomes a sports topic. If one of the owners of the Atlanta Dream talks about the Black Lives Matter movement in derogatory terms, that now becomes a topic. When Herschel Walker or Brian Urlacher say what they want to say about politics, then that’s going to become a topic,” Rose said. “You understand there are going to be people who are unhappy, but I do applaud the NBA, ESPN and national media outlets that allow people to express themselves both ways."