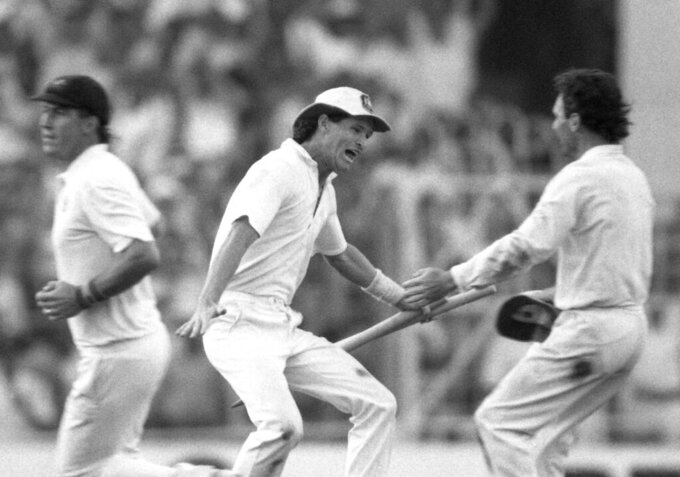 FILE - In this Nov. 8, 1987 file photo, Australian batsman Dean Jones holds the stumps as he races to embrace team captain Allan Border, right, in a moment of jubilation, in Calcutta, India. Jones has died of an apparent heart attack while in India to commentate on the Indian Premier League, it was reported on Thursday, Sept. 24, 2020. He was 59. Jones represented Australia in 52 tests and 164 one-day internationals. (AP Photo/Liu Heung Shing, File)

NEW DELHI (AP) — Dean Jones, a flamboyant Australian cricketer and colorful personality who later forged a respected career in broadcasting, died of an apparent heart attack while in India working as a TV analyst on the Indian Premier League. He was 59.

Jones represented Australia in 52 tests and 164 one-day internationals and was known for his shot-making, his speed and his fielding.

“Dean Jones was a hero to a generation of cricketers and will forever be remembered as a legend of this great game,” Cricket Australia chairman Earl Eddings said. “Anyone who watched cricket in the 1980s and 1990s will fondly recall his cavalier approach at the crease and the incredible energy and passion he brought to every game he played.

“This is a truly sad day. Deano’s loss will be felt not just at home in Australia, but across the globe. Our thoughts and best wishes are with his wife, Jane, and daughters, Isabella and Phoebe.”

Earlier, Star Sports said Jones died from a cardiac arrest at a hotel in Mumbai, where he was remotely covering the IPL. The lucrative Twenty20 league is being played in the United Arab Emirates this season because of coronavirus restrictions in India.

Former Australian opening batsman Michael Slater, who is in Dubai for the IPL, confirmed that ex--fast bowler Brett Lee had done CPR on Jones in an attempt to revive him.

“Brett was beside himself and just wanting some friend support because he had worked on Deano for half an hour before the ambos (paramedics) came,” Slater told Australia’s Seven Network. “We were preparing to get to the ground for today’s coverage, and I’ve got to say it’s one of the hardest broadcasts I’ve ever had to do.”

Jones was widely considered as a pioneering batsman in the ODI format — he was part of Australia's first Cricket World Cup-winning team in 1987 — but also carved out an impressive test career, with his 210 against India in a scorching Madras in 1986 the highlight among his 11 test centuries.

Former Australia captain Allan Border said Dean Jones “revolutionized the game” and the pair had an exchange on the pitch in Madras that has become part of cricket folklore in Australia.

“I loved him,” Border said. “When he scored his 200 in Madras he was so dehydrated but he kept going. At 170 I said ’if you can’t keep going I’ll get a Queenslander on.'”

Border, one of Queensland state's cricket greats, has recounted countless times the kind of encouragement he gave Jones, a Victorian, to continue.

Australia coach and former test opener Justin Langer described Jones as “a true legend of Australian sport and world cricket, one of the great players and personalities in a golden time for the game.”

"His role in the team’s World Cup win in 1987 and the 1989 Ashes under A.B. (Allan Border) were a huge turning point for Australian cricket.”

India greats Sachin Tendulkar and Ravi Shastri were among the international cricket stars who expressed their shock and condolences for Jones on social media.

“Absolutely heartbreaking news about Dean Jones passing away, a wonderful soul taken away too soon," Tendulkar tweeted. "Had the opportunity to play against him during my first tour of Australia. May his soul rest in peace and my condolences to his loved ones.”

Shastri posted: “Really shocking to lose a colleague and a dear friend, Dean Jones. Gone so young. Condolences to the family and may his soul rest in peace.”

Jones played English county cricket for Durham before captaining Derbyshire, and was a sought-after analyst and commentator in retirement.

“Awful to hear the news of Dean Jones passing away in Mumbai,” Australia batsman Steve Smith, who is in Dubai for the IPL, said on Instagram.

“He was a wonderful player for Australia and he will be missed. My thoughts are with his family.”