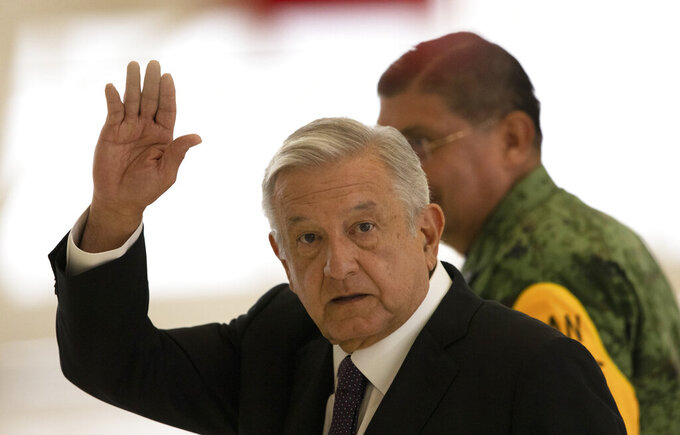 Mexican President Andres Manuel Lopez Obrador waves as he leaves after giving his daily, morning press conference, in front of the former presidential plane at Benito Juarez International Airport in Mexico City, Monday, July 27, 2020. The president, who only flies commercial as one measure in his austerity government, has been trying to sell the plane since he took office. (AP Photo/Marco Ugarte)

MEXICO CITY (AP) — A former government oil company chief who says he was “used” by “an organized apparatus of power” faced a new round of charges Wednesday, after a judge ruled he could stay out of prison while on trial.

Emilio Lozoya, who will have to wear a monitoring bracelet and hand over his passport, entered a second day of hearings as prosecutors laid out new charges roughly equivalent to bribery, criminal conspiracy and money laundering.

Those charges are apparently related to alleged bribes from the Brazilian construction giant Odebrecht, which has been investigated throughout the region in recent years for buying government contracts with generous bribes. Prosecutors claim Lozoya even offered one of Odebrecht's Mexican executives a government job. The company reportedly received about $39 million in profits from work in Mexico apparently gained through the bribes.

Odebrecht executives allegedly gave Lozoya $4 million to put toward the 2012 campaign of former President Enrique Peña Nieto, President Andrés Manuel López Obrador’s predecessor. Prosecutors said Lozoya engaged in a conspiracy with his wife, his sister and his mother to channel the money through front companies they controlled.

Odebrecht also allegedly kicked in an additional $6 million once Peña Nieto was in office. Some of that money was allegedly used to bribe federal lawmakers into voting for his signature energy reform package, known as the Pact for Mexico, which opened the country’s energy sector to greater private investment.

López Obrador opposed the energy overhaul, and he suggested at a news conference Wednesday that in the second half of his term, from 2021 to 2024, he might seek to reverse the private-sector energy openings, while respecting exploration contracts already signed under the reforms.

“It would be a return to what existed before ... of state control over natural resources," López Obrador said, referring to the decades when the state oil company Petroleos Mexicanos did almost all the work itself.

Lozoya’s legal team has given signs that he will implicate former top officials, saying he was “used as an unintentional instrument” by others. However, prosecutors say Lozoya allegedly used much of the purported bribe money to buy houses for himself or relatives.

Lozoya did not identify the group that he said “used" him, but his lawyers did say they were “high-ranking officials of the Mexican government,” suggesting he was ready to implicate top officials in the administration of Peña Nieto.

Tuesday's hearing wasn’t open to the public, but according to a synopsis of the session provided by the court system, Lozoya’s lawyers said he would “at the right time, denounce the acts committed and clearly identify those responsible and the posts they held.”

Lozoya has reportedly agreed to cooperate with prosecutors and will act as a protected witness in return for possible sentence reductions or elimination of charges.

According to the synopsis, the prosecution spent much of Tuesday's hearing describing how Lozoya allegedly received about $3.4 million in payments from a Mexican company in 2012. They said that in 2013, as head of Petroleos Mexicanos, Lozoya argued against all evidence and reason that Pemex should pay the same company well over book value for a disused and decrepit fertilizer plant.

Lozoya told the court he was innocent of the charges.

He fled Mexico and led authorities on a monthslong overseas manhunt. Spanish police arrested him in the city of Malaga in February, and he was extradited to Mexico in mid-July.

The court held the proceedings via a video link because of coronavirus pandemic restrictions and the fact that Lozoya has been under treatment in a hospital for pre-existing conditions.