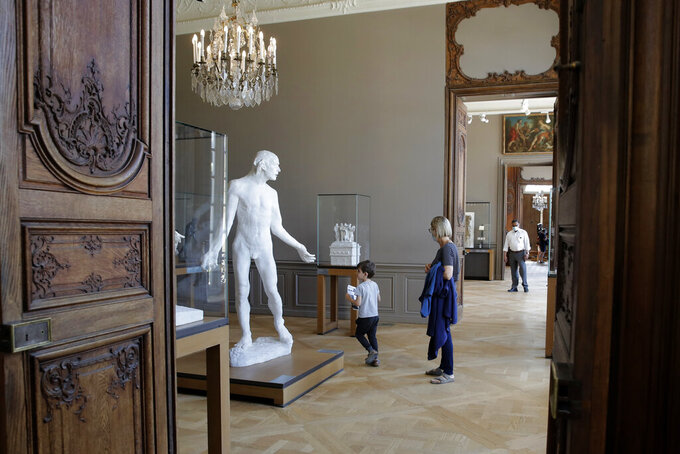 Travelers visit the Rodin museum in Paris Tuesday, July 7, 2020. The Musee Rodin is reopening this morning albeit with a worrying loss of visitors and income caused by the four-months closure. Museum director, Catherine Chevillot, estimates the loss incurred by the crisis to be around 4.4 million euros (4.9 US dollars) and alleviated by the 1.4 million euro sales of bronze editions of Rodin statues. The museum doesn't sell Rodin statue originals but can sell 12 bronze replica editions of each of them, as it has been for 100 years. (AP Photo/Christophe Ena)

PARIS (AP) — Unlike other museums thumped by the coronavirus pandemic, Paris’ Rodin Museum might have an ace up its sleeve to help see it through the crisis: It can sell limited-edition versions of the French sculptor’s masterpieces.

The self-financed museum dedicated to the works of Auguste Rodin is facing a mountain of challenges. Tourists were scarce as it reopened Tuesday after four months of virus-enforced closure, and a return to the good old days is a long way off. Signs seeking donations now line its walls.

But a measure of relief may come from a century-old system set up by Rodin himself allowing the museum to sell up to 12 replicas of select sculptures every year. The bronzes are cast in special workshops in a process overseen by the museum and bought by art galleries, private collectors or other museums. Rodin's priceless originals are mainly carved out of marble.

The sales have helped his artworks reach a worldwide audience, but up to now, they've produced uneven results. Given an expected lockdown-related budget shortfall of 3 million euros ($3.4 million) this year, the museum wants to turn the bronze sales into a bigger and more regular source of revenue.

So it is expanding its catalog and reaching out to new markets. It’s already sold out of this year’s copies of “The Thinker” and “The Burghers of Calais,” among the sculptor’s most famous works.

Museum director Catherine Chevillot said Tuesday it has completed 1.4 million euros in sales of bronze replicas of Rodin statues so far this year. In an interview with The Associated Press, she said the museum’s goal is to secure a yearly minimum of 3 million euros in statue sales, a quarter of the museum’s budget.

Prices for the statues vary from 50,000 euros to millions of euros, meaning a few big sales or many smaller ones are needed to make the target.

“Our challenge is not to sell more but more regularly,” Chevillot said. Because “some years we sell 6 to 9 million euros in statues and others nothing.”

The museum has sold a total of 5,000 such works over the last 100 years. Many have gone to buyers in Europe and the U.S., but sales in those traditional markets have diminished in recent years. So the museum is now turning to Asia, Latin America, and Gulf countries for new clients.

In addition, Chevillot said the museum has now quadrupled the number of works it is allowed to produce, from 30 to 120. It is also pursuing new partnerships, including one with the Gagosian Gallery in the U.S.

Rodin donated all of his works to the French state, allowing for the creation of the museum that is set amid a tranquil garden filled with Rodin originals in the shadow of Paris’ gold-domed Invalides monument.

The museum used to draw about 2,500 people per day during the summer months — led by Americans. This year, with Europe’s borders closed to the U.S. and most other countries because of the still-spreading virus, it’s preparing to see a drop in visitors by as much as 80%.

The museum also expects a drop in special event income this summer because weddings and large corporate gatherings remain off-limits because of virus risks.

That means that even with eventual new bronze sales, the museum’s future is cloudy after a rough few years for tourist sites across Paris.

“It’s the third year that things are difficult: the first was the yellow vest protests, the second year strikes and this year the (virus) crisis,” Chevillot said. “Each year we’re digging into our reserves, so I wouldn’t like there to be a fourth and fifth year.”