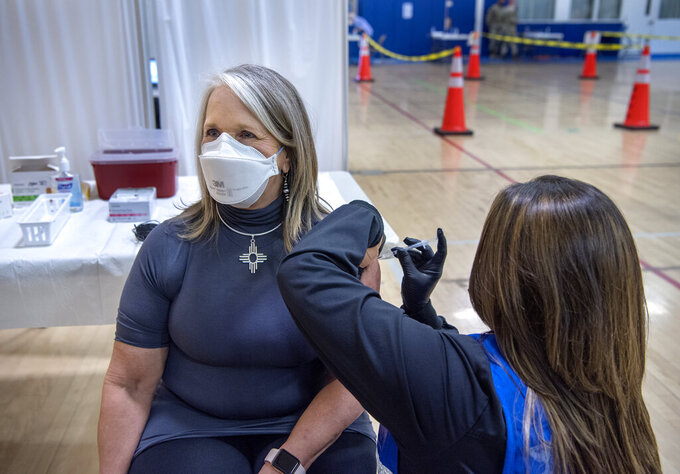 The child care offers covers dates of the vaccine appointments and in some cases, recovery time in ensuing days when parents might be feeling symptoms of a second dose.

The offer is part of the latest push to incentivize vaccine rollouts.

Earlier this month, New Mexico officials unveiled a $5 million sweepstakes for vaccinated adults, the largest such prize in the country. On Wednesday, they said there was a slight increase in vaccination registrations following the announcement of the cash prize.

He said the slight uptick suggests it “may have contributed to a general flattening of, or even slight improvement upon, a recent downward trend in new registrations.”

Companies have pitched in incentives as well, from free beer to free rides from app-based ride-hailing apps.

KinderCare in Albuquerque says it is providing free child care days as part of a nationwide effort to encourage vaccinations announced by the White House last week in the run-up to July 4th.

“We don’t want a lack of child care to stop your family from making an appointment to get vaccinated or from taking a family member in to get their COVID vaccine,” KinderCare district manager Aaron Alaniz said.

The company’s four locations in Albuquerque are participating in the vaccine promotion, mostly Monday through Friday.

Other child care centers like the La Petite Academy in Santa Fe and Albuquerque are participating also, according to the state's Early Childhood Education and Care Department.

YMCA locations in New Mexico and around the country are offering free child care, too, including for nonmembers.

“We’ve had people stopping in,” said Valerie Culver, aquatics director at the YMCA of El Paso, Texas, which serves neighboring areas in southern New Mexico and Ciudad Juarez, Mexico. “They just have to fill out a little bit of paperwork, drop their kid off, and go get the vaccine.”