Freeman's return will be closely watched after virus fight 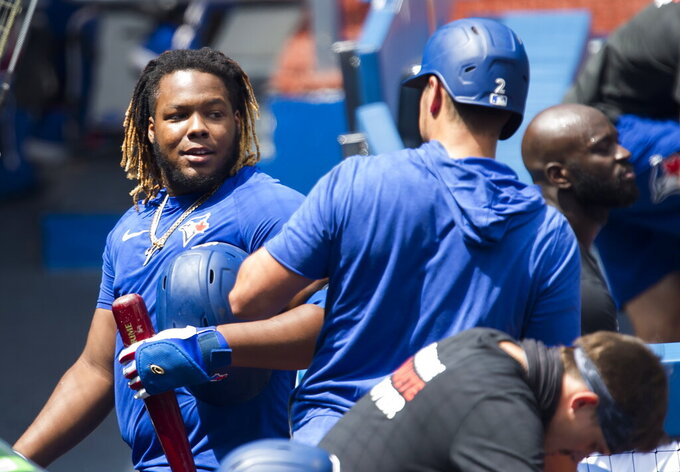 Freddie Freeman is back and ready to anchor the Braves' lineup after a scary battle with COVID-19 earlier in summer camp.

The 30-year-old Freeman had career highs last season with 38 homers and 121 RBIs. The four-time All-Star hopes to lead Atlanta back to the top of the NL East for the third straight season.

The Braves are just happy Freeman is healthy after he had a fever that got as high as 104.5 degrees early in his illness. His recovery will be closely watched because he had one of MLB's more serious bouts with the virus.

“I feel like I’m a kid in a candy store again,” Freeman said Saturday. “You forget sometimes how much you love this game. I did truly miss it. I was so excited when I got to the yard.”

If Freeman is healthy, he'll join a lineup that includes some of the game's best young players, including Ronald Acuna Jr. and Ozzie Albies.

Here's a look at some other players to watch across MLB during the upcoming 60-game schedule that starts on Thursday. This week's focus in on the NL and AL East Divisions.

BALTIMORE ORIOLES: 1B/DH Chris Davis. The Orioles would love for the veteran to break out of a prolonged slump considering he's in the fourth year of a seven-year, $161 million contract. He looked good in March before the coronavirus-caused delay to the season and can provide homers in bunches when his swing is right.

BOSTON RED SOX: 3B Rafael Devers. The 23-year-old star will be counted on to pick up some of the offensive load without Mookie Betts, who is now with the Dodgers. Devers is coming off a productive 2019 season in which he hit .311 with 32 home runs, 115 RBIs, an AL-leading 54 doubles, and a major league-leading 90 extra-base hits.

NEW YORK YANKEES: OF Giancarlo Stanton. He only played 18 games last year due to various injuries, and Yankees fans booed him during many of them. The good news is he's healthy now and won’t get booed in the Bronx during 2020 no matter what happens. He's now three years removed from his MVP season in 2017 when he smashed 59 homers.

TORONTO BLUE JAYS: Vladimir Guerrero, Jr. One of baseball's best young hitters, Guerrero hit .272 with 15 homers during his rookie season in 2019 at age 20. He'll likely play most of his games at first base or DH this season after spending most of last year at third base.

MIAMI MARLINS: 1B Jesus Aguilar. He slipped from 35 homers and 108 RBIs in 2018 to 12 and 50 last year, when he lost his job with the Milwaukee Brewers. Now, at 30, he’s trying to reboot his career with the Marlins, where he’ll split time between first base and designated hitter.

NEW YORK METS: RHP Dellin Betances. The four-time All-Star pitched in just one game last season with the Yankees because of multiple injuries. Now he's moved across town and the Mets hope his presence can bolster the back end of the bullpen. If healthy, he's one of the game's best power pitchers, striking out 14.6 batters per nine innings.

PHILADELPHIA PHILLIES: OF Bryce Harper. It feels unfair to call Harper's first season in Philadelphia underwhelming considering he hit 35 homers and had 114 RBIs in 2019, but he didn't quite have the impact many expected after signing a 13-year, $330 million deal. The six-time All-Star is still right in the middle of his prime at 27 years old.

WASHINGTON NATIONALS: OF Juan Soto. Considered by some a legit MVP candidate at age 21. He had an impressive second season in 2019 with 34 homers and 110 RBIs and was also clutch during the team's postseason run with important hits off star pitchers like Josh Hader, Clayton Kershaw and Gerrit Cole.