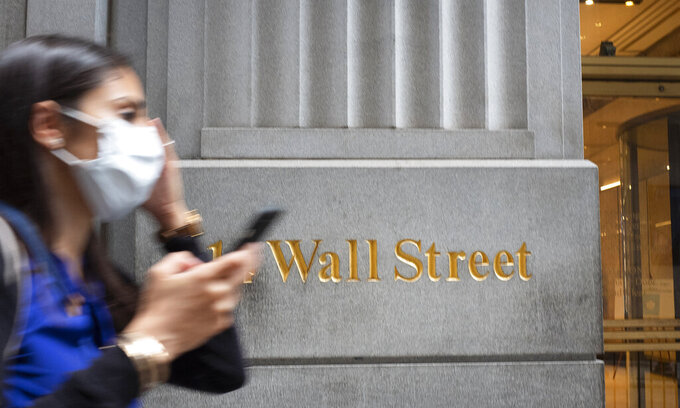 FILE - In this June 30, 2020 file photo, a woman wearing a mask passes a sign for Wall Street during the coronavirus pandemic. Stocks are starting another week with modest gains on Wall Street, and the S&P 500 is making its latest run at its record high. (AP Photo/Mark Lennihan, File)

NEW YORK (AP) — Wall Street nudged a bit higher on Monday, and the S&P 500 teased even closer to its record high.

The benchmark index rose 9.14 points, or 0.3%, to 3,381.99. Earlier in the day, it briefly crossed above its record closing level of 3,386.15, which was set on Feb. 19 before the pandemic shut down businesses worldwide and created the worst recession in decades. It’s the third time in the last four trading days the index has risen above that record, only to fade later in the day.

"It seems like a nothing day until you realize we’re sitting right on an all-time high for the S&P 500,” said Mark Hackett, chief of investment research at Nationwide.

The S&P 500 added onto its three-week rally, even though investors are still waiting for Congress to offer more aid to the economy. Investors say it’s crucial that the support comes, particularly after $600 in weekly unemployment benefits and other stimulus from the U.S. government expired.

Markets seem to be banking on Democrats and Republicans coming to a deal, even though both sides say they remain far apart. Without the lifeline, analysts say the economy won’t be able to make the recovery that investors have been assuming is on the way. And that assumption is a huge reason the stock market is as high as it is.

“Hence, another round of stimulus is the difference between ensuring that the economic recovery continues uninterrupted and a meaningful short-term pullback in growth,” Morgan Stanley strategist Michael Zezas wrote in a report.

Investors seem willing to wait for a deal, for now. But if it gets deep into September, and Democrats and Republicans still remain far apart in their negotiations on the size of the deal, Zezas said it may be too close to the election to get one done.

Wall Street was nearly evenly split between stocks rising and falling Monday, with tech stocks again helping to lead the way. They’ve been remarkably resilient through the pandemic as investors build up bets they can continue to grow as work-from-home and other trends accelerate.

Tech stocks across the S&P 500 climbed 0.5%, and they alone accounted for about two-thirds of the index's gain. Nvidia jumped 6.7% for one of the biggest gains in the index, and Microsoft added 0.7%.

But losses for financial and energy stocks helped restrain the market’s gains. These areas tend to rise and fall with expectations for the economy, and they had been showing a bit more life in recent weeks in an encouraging sign for market watchers.

Smaller stocks and transportation stocks have also been making gains recently, said Nationwide's Hackett, who called it “good news for the sustainability of the rally.”

“It’s very hard for Microsoft, Amazon and Tesla to continue to do all the heavy lifting," he said. "You’re going to need some help from others.”

Shares of several banks were under pressure Monday after Warren Buffett’s Berkshire Hathaway disclosed that it cut back its investments in them. Wells Fargo slumped 3.3% after the famed value investor trimmed Berkshire Hathaway’s ownership stake by about a quarter.

Treasury yields moderated a bit, following the big run for the 10-year yield last week. It dipped to 0.68% from 0.71% late Friday. It had zoomed upward from 0.56% through the week.

Higher yields can be an indication that investors are upgrading their expectations for inflation and the economy. But they can also pull some buyers away from stocks into bonds, hurting stock prices in the process.

In Asia, Japan’s Nikkei 225 fell 0.8% after data showed the world’s third-largest economy shrank at an annual rate of 27.8% in April-June, the worst contraction on record.

Hong Kong’s Hang Seng gained 0.7%, and stocks in Shanghai jumped 2.3% after analysts said actions by China's central bank raised the possibility of more support ahead for the market.