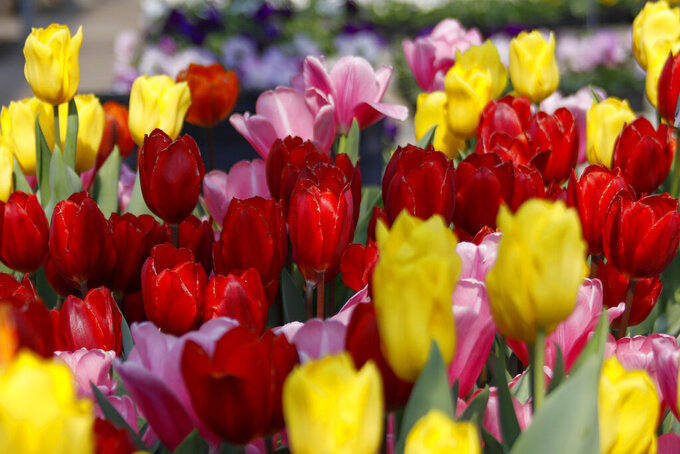 HARRISBURG, Pa. (AP) — With outdoor planting season in full swing for much of Pennsylvania, many garden centers and the farms that supply their vegetable seedlings and flowers are buckling under the pain of Gov. Tom Wolf's orders to tens of thousands of businesses to shut down to contain the spread of the coronavirus.

Garden centers that remain shuttered under Wolf's statewide March 19 order for “non-life-sustaining” businesses to close say they are losing out during a crucial eight-week stretch before June.

With the last frost likely past, home gardeners are planting outdoors in earnest for the summer growing season, and a relaxed shutdown order could be weeks away for most parts of Pennsylvania.

“It makes you almost want to sit down and cry when you see people pull in to the parking lot and see that the sign says ‘closed,'" said Corey Wray, owner of Wray's Landscaping in Lewistown, along Route 322 between Harrisburg and State College.

Meanwhile, he sees shrubs, seedlings and other lawn and garden supplies being sold by big-box stores, farming supply stores or competitors that sell farm supplies, building materials or other qualifying goods that allow them to stay open. Nurseries and greenhouses can remain open to grow, as can retail farmers' markets and “on-farm markets," according to Wolf's administration.

Mark Ott, whose fourth-generation Cleveland Ott & Sons farm in Montgomery County sells flowers, plants and vegetable seedlings such as peppers, tomatoes, cabbage, broccoli and lettuces to about 50 garden centers and farm stands, said he and his mom-and-pop retail clients are facing financial ruin.

Ott is allowed to operate by the state, but he is making about 20% of the sales he would normally expect during a period when he makes 80% of his annual sales, he said.

Both he and the garden center owners are afraid of the virus: they wear masks, stay six feet apart when working and don't want people crowding into their stores, Ott said.

In another two weeks, his crucial sales stretch could be a complete loss after spending months and perhaps $800,000 on labor, potting soil, propane and other expenses to prepare for the planting season, Ott said.

If he can't sell everything he's growing, he won't have cash to prepare for next year's growing season, he said.

“Honestly, my blood pressure goes up when I think about it,” Ott said. “I’ve lost too many nights of sleep over this. What they're forcing us to do is put a ‘for sale’ sign out at the end of the year.”

Wray sought a waiver from the Wolf administration before Easter and was told that he could not open his retail operation, where for five years he has sold seeds, seedlings, shrubs, saplings, gardening tools, grass seed, landscaping stone and more.

Wray can still operate his landscaping service, and he has a greenhouse where he is growing plants, but now is the crucial period where he sells heavily to home gardeners.

Part of his pain is that Wray is coming off a weak snow-plowing season. Another part is watching others sell the same goods.

Wray said he would consider defying the state's closure order, but worries that he would lose his various business licenses and a federal loan he just received under a government program intended to help small businesses devastated by the coronavirus outbreak.

“If it’s going to be fair, they ought to make it fair,” Wray said. “Nothing against Lowe's, but they're getting rich and we’re struggling every day.”

Asked Friday at a video news conference about the potential for waivers for garden centers, Wolf said his administration is “always having conversations but again, we’re looking to really start the reopening process on May 8” when Wolf has said he will consider easing his shutdown orders in less-affected regions of the state.

Since Wolf ordered all “non-life-sustaining” businesses to shut down, his administration has pared back its guidance for some business sectors and issued waivers on a case-by-case basis to individual businesses that applied.

He also extended his stay-at-home order to every corner of the state on April 1. Aside from May 8, he will allow construction to restart next Friday.

On Friday, four Republican state senators said they will introduce legislation to force Wolf's administration to issue waivers from the orders so that garden centers can reopen while adhering to social distancing and other guidelines issued by the U.S. Centers for Disease Control to protect employees and customers.

In other coronavirus-related developments:

Pennsylvania’s COVID-19 death toll rose by 71 to 1,492, the state health department reported Friday, with about 1,600 additional people testing positive for the virus that causes the disease.

Statewide, more than 38,600 people have tested positive, according to the latest Health Department data. The number of infections is thought to be far higher because many people have not been tested, and studies suggest people can be infected with the virus without feeling sick.

The agency said it is expanding curbside pickup to 389 additional Fine Wine & Good Spirits stores across the state, meaning that nearly all of the state’s liquor stores will now offer the service.

The move to expand curbside pickup follows Wolf’s unpopular closure of the state-owned liquor stores. The state’s online ordering system has been unable to keep up with overwhelming consumer demand, though it has recently increased capacity.

Most stores will offer curbside service Monday through Saturday. Stores will take orders by phone, accepting the first 50 to 100 orders placed each day. Each customer is limited to no more than six bottles.