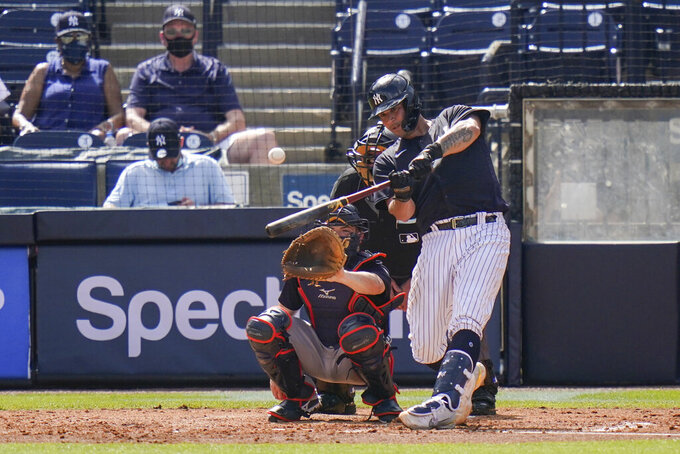 TAMPA, Fla. (AP) — Gary Sánchez has impressed the New York Yankees early on at spring training as the catcher strives to rebound from a disastrous 2020 season.

Sánchez poked an opposite-field single to right in the second inning against Zack Wheeler and scored on Brett Gardner’s grand slam as the Yankees beat the Philadelphia Phillies 4-0 on Sunday.

“I think overall just a much more confident version of the Gary Sánchez that we saw in 2020,” Yankees catching coach Tanner Swanson said. “He has really attacked the offseason. Been really accountable for his performance in 2020. I think he’s in a really good place and his process is really sound. I’ve been really pleased.”

The slugger also walked and has three hits in nine at-bats overall this spring after hitting just .147 and striking out 64 times in 156 at-bats during the pandemic shortened 2020 season.

“He has really invested himself in what we’re doing,” said Swanson, who has been working with Sánchez since January. “Has refined his process. Has put in a lot of quality work in. I think we’re seeing that transfer into the game.”

The struggles last year for Sánchez continued into the postseason, where the former All-Star was benched during the Yankees’ AL Division Series loss to the eventual AL champion Tampa Bay Rays in favor of Kyle Higashioka.

“He was grinding but he was always a great teammate,” Yankees second baseman DJ LeMahieu said. “Always positive. He’s the same guy this year. It’s early, but he’s had some really good at-bats so far and it’s great to see.”

Sánchez sought out extra at-bats over the offseason by playing in the Dominican Winter League, where he batted .245 with two homers in 15 games.

Those numbers weren't encouraging, but he's come out firing this spring. Sánchez's two hits previous to Sunday were long homers, including a rare drive over the 40-foot batter’s eye in center field at Steinbrenner Field. He has also displayed defensive improvements after a 2020 filled with miscues.

“Pretty amazing to see the improvements he’s made in the short period of time,” Yankees outfielder Aaron Judge said.

“When we broke camp year last year, and really when we got disrupted with the pandemic and had to come back, we kind of had a foundation laid but weren’t really able to expand much beyond that,” Swanson said. “So, I think this year with the work he’s done this offseason we’ve been really able to open the playbook.”

NOTES: Yankees manager Aaron Boone said Gardner's homer gives the outfielder something to talk about with the team's power hitters. “That will put some wind in his sails for a couple days as far as the smack talk goes,” Boone said. ... The Yankees wore their pinstripe uniforms. They will be doing it on Sunday home games at spring training. It is a change from previous years when New York would only wear them at the spring training home opener. ... RHP Corey Kluber will have a live batting practice session at the minor league complex on Monday's day off.