Gearing up for USC, Colorado quickly pivots to face SDSU 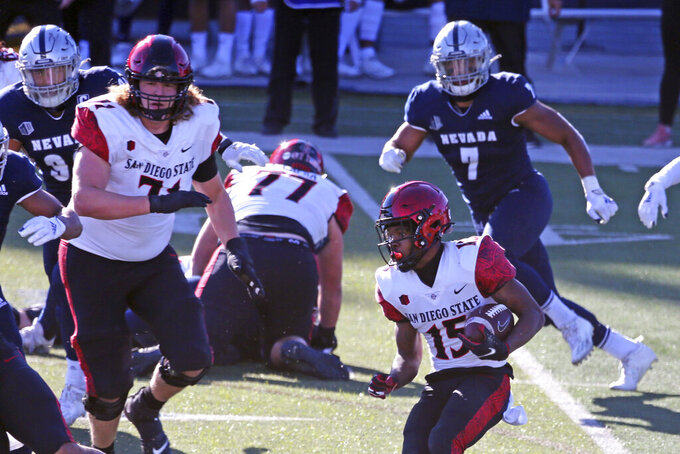 Over Thanksgiving dinner, Colorado coach Karl Dorrell had to digest this delectable morsel: Out was Southern California as an opponent, in was San Diego State.

That’s how rapidly the Buffaloes' opponent changed. So after the holiday feast, Dorrell went back to the office to brush up on the Aztecs. Colorado (2-0, 2-0 Pac-12) will host San Diego State on Saturday after its game against No. 19 USC was canceled due to COVID-19 issues within the Trojans' program.

The Aztecs (3-2, 3-2 Mountain West) had an opening in their schedule when their contest at Fresno State was canceled by the league Sunday due to contact tracing concerns with the Bulldogs.

Once the Pac-12 announced the USC cancellation Thursday night, the Buffaloes moved quickly to finalize the San Diego State game and avoid a second straight off week (their contest against Arizona State on Nov. 21 also was scrubbed).

“We ended up putting together a really good plan we think," Dorrell said Friday night in a Zoom call. "Our players did a great job of staying focused, had a good practice (Friday). We’re right where we need to be. Now we have to go out there and execute.”

Earlier in the week, there was talk of San Diego State possibly moving up a game with No. 8 BYU that’s currently scheduled for Dec. 12. Or maybe even playing Washington in Seattle, before the Huskies were rescheduled to play Utah. Through all the speculation, San Diego State coach Brady Hoke kept the same stance — his team was open to playing anyone and at anytime.

“Our guys work too hard in the offseason, they work too hard during fall camp not to have the opportunities to play football games,” Hoke said Monday.

Over the offseason, Dorrell — who's in his first season as head coach at Colorado — spent time scouting all the opponents on the schedule.

Obviously, the Aztecs weren't one of them.

But Dorrell actually did a little homework on San Diego State earlier in the week, figuring it could be a potential matchup given the virus situation at USC. But then he switched his focus back to the Trojans when it looked like the game might be played.

Now, the full attention is back on San Diego State.

“There are some things we had in the game plan most of the week, that we were planning for USC, and we’re going to continue to utilize,” Dorrell said. “It’s one of those games you're going to have to make adjustments along the way given the shortness of the matchup.”

San Diego State's only football game against Colorado was on Sept. 7, 2002, at Folsom Field when a ranked Buffaloes team churned out a 34-14 win. In the contest, San Diego State’s Kassim Osgood had 14 catches for 178 yards, while Colorado’s Chris Brown rushed for 185 yards and two scores.

Among the links between the two schools, San Diego State cornerbacks coach Demetrius Sumler played tailback at Colorado from 2007-09. He was coached by Colorado running backs coach Darian Hagan.

San Diego State running back Greg Bell is averaging 113 yards per game while a stout Aztecs defense only allows 15.4 points.

“It’s definitely a challenge for us and know our players are working hard to be ready to go,” Dorrell said.