Geffen Hall rebuild speeded due to virus, reopen in fall '22 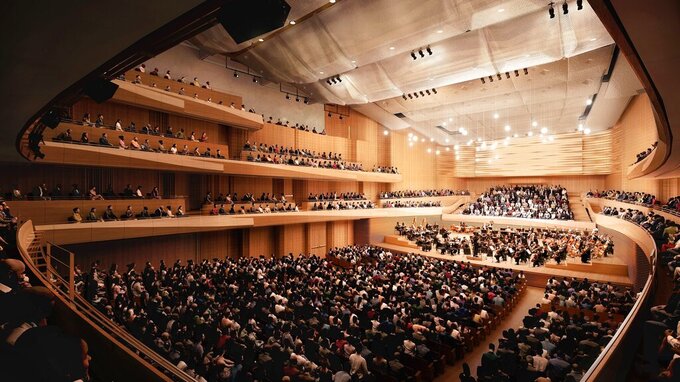 NEW YORK (AP) — The New York Philharmonic and Lincoln Center for the Performing Arts are accelerating the reconstruction of Geffen Hall because of the lull granted by the novel coronavirus pandemic and now plan to reopen the auditorium in fall of 2022, about 1 1/2 years ahead of the original schedule.

Rather than rebuild in phased segments around seasons, the Philharmonic said Monday it will relocate for the 2021-22 season and split concerts that year between Lincoln Center’s Alice Tully Hall, a 1,086-seat venue more typically used for chamber concerts and recitals, and Jazz at Lincoln Center’s 1,233-seat Rose Theater, located at Columbus Circle, less than half a mile from Geffen Hall.

Philharmonic President Deborah Borda said a full season will be announced in late May or early June to start in late September, and that in light of COVID-19 the first 1 1/2 months of concerts will be performed without intermission. The Philharmonic traditionally performed programs on Thursdays, Friday, Saturday and Tuesday nights, but Borda said its union contracts had changed to allow it to shift to Sunday matinees from Tuesdays.

The Philharmonic and Lincoln Center said Monday they had raised $500 million of the $550 million needed for the project, up from $360 million committed when the earlier timetable was announced in December 2019.

“Once the closure of the Hall was mandated because of COVID, we realized the Phil would be out of work for an extensive period of time and it made sense to accelerate the construction,” Lincoln Center chair Katherine Farley said in an interview with The Associated Press. “It also gave us an opportunity to be part of New York’s economic recovery, because this project and is going to create 6,000 jobs.”

Construction jobs are expected to be held 30% by minority- and women-owned business, and 40% of the construction work is to be performed by minorities and veterans.

“During the time we were planning the acceleration, we did a tremendous amount of logistical planning,” she said. “We also did some maintenance of things that needed to be done, prosaic things like fixing the roof and so forth. And we were also able to do some targeted demolition. As of now, we are ready to go full steam ahead.”

The rebuilt Geffen Hall is to have a capacity of under 2,200, down from 2,738, with the rows in the orchestra cut from 43 to 33, and the stage moved forward 25 feet, allowing seven rows of wraparound seating behind the orchestra. About two-thirds of the third tier will be eliminated.

Size of the lobby space will be doubled, and there will be large garage doors leading to Lincoln Center’s Josie Robertson Plaza. The sidewalk studio for education activities and areas for art installations are intended to be open 18 hours daily. There also will be new dining options and east and west patron lounges, which will be available for performances — and rentals.

A digital organ will be installed at the hall, which has been without an organ since the original 45,000-pound Aeolian-Skinner organ with 5,498 pipes was removed in a 1976 renovation.

Diamond Schmitt Architects is the lead firm of the renovation design with Akustiks and Fisher Dachs Associates. Public spaces are by Tod Williams Billie Tsien.

Opened in 1962 as Philharmonic Hall at a cost of about $21 million and designed by Max Abramovitz with acoustics by Bolt, Beranek and Newman, the orchestra's auditorium has been criticized for a sound that emphasizes brass and muddles lower strings.

Changes made during many summers included adding reflecting panels on side walls, removing the original sound “clouds” and installing a stepped ceiling. The building was named Avery Fisher Hall after a $10.5 million gift in 1973, and three years later, there was a major renovation with the input of Cyril Harris, the acoustician for the praised Metropolitan Opera House next door. Another renovation in 1992, this time with Artec Consultants as the acoustician, included suspended panels.