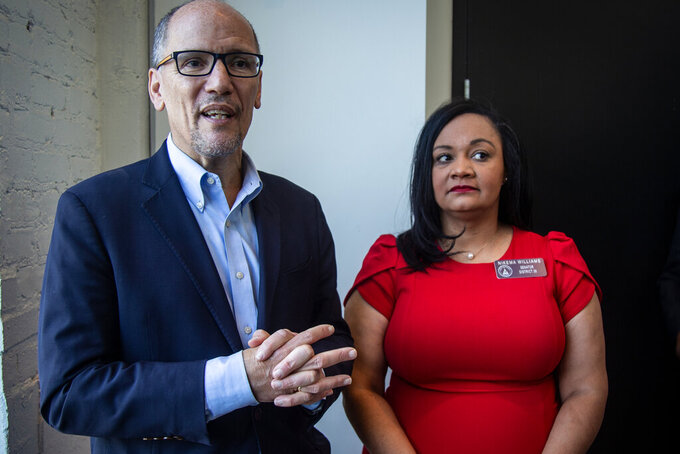 ATLANTA (AP) — The head of Georgia’s Democratic Party has been chosen to face a Republican reality TV personality in the November contest for the seat of the late Rep. John Lewis, a towering figure who served in Congress for more than 30 years.

The selection of state Sen. Nikema Williams caps a quick and extraordinary process driven by state law where the party had roughly 72 hours to select someone to take Lewis' spot on the ballot.

Williams received 37 of 41 votes from the executive committee of the Democratic Party of Georgia on Monday after it heard from five finalists in rapid-fire interviews during a meeting held by video conference because of the coronavirus pandemic.

“I have a long career in activism, advocacy, and policy to serve as a strong fighter for our communities and values nationally,” Williams said, with a picture of Lewis on the wall behind her.

She is nearly assured of winning in November in the heavily Democratic 5th Congressional District, which includes parts of Atlanta.

After Lewis' death on Friday, the state party quickly opened an online application process for people interested, receiving over 130 applications by Sunday night. That group was then narrowed down to a list of five finalists by Monday morning for the executive committee to consider.

Like Lewis, the 41-year-old Williams was raised in Alabama. She attended Talladega College, a historically Black school, and talks often of her family’s deep ties to the civil rights struggle and the politics of race.

She long has been active in state party politics. Before being elected as a state senator in 2017, she was a lobbyist for Planned Parenthood across several Deep South states. She’s also climbed national party ranks, currently serving as one of the vice chairs of the Democratic National Convention Platform Committee that will shape the party’s 2020 platform. Williams’ husband, Leslie Small, worked previously for Lewis as a top aide in the district.

Williams’ elevation to congressional nominee, and her election as state party chairwoman before that, are part of a sea change in Georgia Democratic politics. The party for decades has been dependent on Black voters at the ballot box but still had most often put forward white men as its top leaders and statewide nominees. Now, Williams stands to join two other Black women, Atlanta Mayor Keisha Lance Bottoms and 2018 gubernatorial nominee Stacey Abrams, as perhaps the state’s most recognizable, influential Democrats.

Williams was arrested at the state Capitol in 2018 during a protest calling for uncounted ballots from the Nov. 6 election, in which Abrams lost to Republican Gov. Brian Kemp, to be tallied.

“My entire political life, I have considered myself a student of the John Lewis school of politics,” Williams said Monday. “I studied Congressman Lewis’ work closely and practiced the art of getting into good trouble.”

Williams will face Republican Angela Stanton-King in November. Stanton-King is a reality TV personality and was pardoned earlier this year by President Donald Trump for her role in a stolen car ring, after serving six months of home confinement in 2007.

Lewis won more than 84% of the vote when he last faced a Republican opponent in the district in 2016.

The seat will remain empty until a special election, called by Kemp, is held for the remainder of Lewis' current term. The Republican governor has not yet indicated when he will hold an election, with only months left in the term.

Lewis, 80, died Friday, several months after he was diagnosed with advanced pancreatic cancer. Funeral plans have not been announced. Kemp declared flags in Georgia will be at half-staff until sunset of the day of Lewis’ funeral.

Hundreds of people came to a giant mural of Lewis near his downtown Atlanta home Sunday to pay their respects. Flowers, balloons, photos, candles and cards piled up at the base of the building where “HERO” is written above the painting of Lewis speaking.