As Georgia quits federal jobless aid, many to lose payments 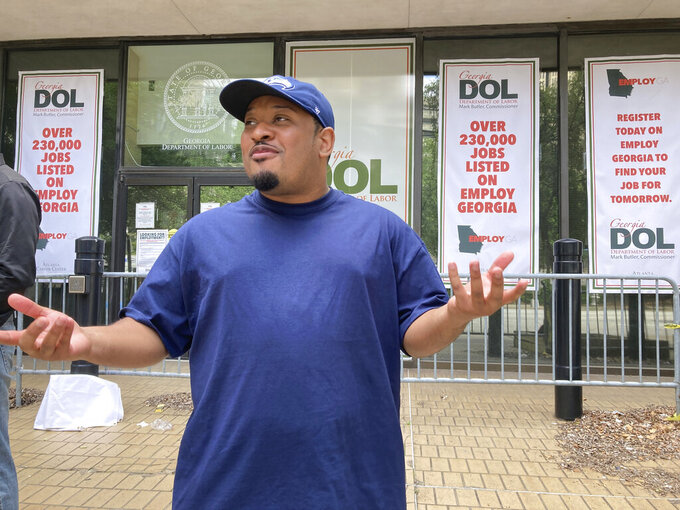 Marcellus Rowe, 29, talks about the prospect of losing federal unemployment aid at a protest outside the Georgia Department of Labor, Thursday, June 24, 2021, in Atlanta. Rowe says he's not sure how he will pay his rent and utilities without the aid. (AP Photo/Jeff Amy)

ATLANTA (AP) — Like more than 165,000 other Georgians, Amy Bielawski will make one more claim this week for special unemployment benefits. But then the Tucker resident will be on her own, as Georgia withdraws from programs that pay benefits to people who normally aren't eligible.

Georgia could keep using federal funding to pay the benefits through Sept. 6. But like 21 other Republican-led states, Georgia announced it was withdrawing from some or all of the programs early. Nine other states are ending benefits by the end of this week.

Labor Commissioner Mark Butler and Gov. Brian Kemp say the moves are needed because they’re hearing from employers who are having trouble finding workers. They say the federal benefits mean businesses have to compete with relatively high pay to remain on unemployment.

“It’s time to go back to work,” Butler said Thursday. “We can’t keep going down this road forever.”

But Bielawski, an entertainer for 27 years, said companies and others aren't yet scheduling the parties that are the bread-and-butter of her livelihood as a performer and booking agent for others.

“Some things are coming back, but entertainment is one of those things that is last on the list,” said the 56-year-old Bielawski, who calls herself “a fire-eater and a face-painter."

Bielawski is one of many who has benefited from the expansion of unemployment benefits during the pandemic. As someone who works from contract to contract, she said she's never qualified for unemployment before. But Congress created a new program, called Pandemic Unemployment Assistance, aimed at people who aren’t usually eligible, including independent contractors, gig workers, or employees of nonprofits. So Bielawski said she's had a regular income that allowed her to cover her mortgage, property taxes and home insurance.

“It was quite wonderful, really,” said Bielawski, who said her income suffered for years during and after the Great Recession.

Now she's trying to avoid new expenses, saying she had been exploring buying health insurance, but stopped. She said she feels betrayed by Butler and Kemp's decision to pull out.

“Don't tell me you're going to keep this going and send me this lovely letter and then stab me in the back,” Bielawski said.

Federal data shows that private sector job openings and firms unable to fill jobs were at record levels in May, as was the rate at which people were voluntarily quitting jobs, presumably to move to a job they liked better. But a relatively low share of the prime working-age population is currently working, and some people are still stuck working part time who would like more hours.

Butler said he will judge the success of the move if more people enter the labor force and more people get jobs in coming months. He says he's not trying to be punitive.

Georgia is also reinstating the requirement that unemployment beneficiaries prove they are actively looking for a new job. That means registering with the state’s online system. But Butler said it appears few new people have registered in recent weeks.

Others say there’s no proof that that people are staying out of the labor market because of the enhanced benefits. Andrew Stettner, who studies unemployment for the Century Foundation, said the number of jobless claimaints is falling even as benefits have continued.

Georgia business groups, though, have welcomed the end of the benefits. Nathan Humphrey, the Georgia director for the National Federation of Independent Businesses, said earlier this month that many businesses are operating at reduced capacity because they can’t find enough people to work.

“The people who are standing up saying the unemployment benefits have nothing to do with this problem, they have their head in the sand," Butler said.