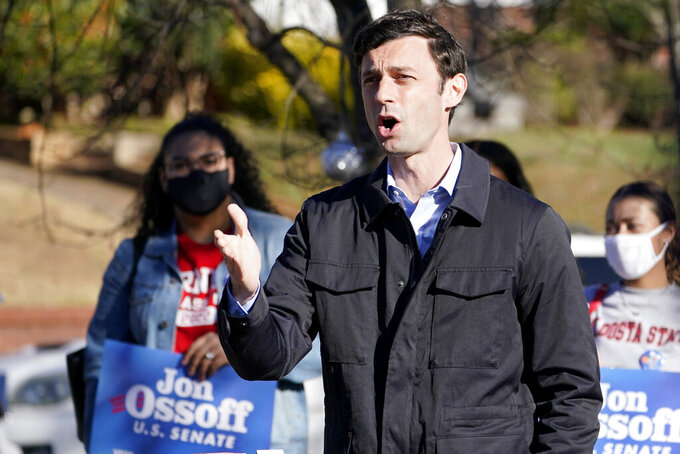 Democratic nominee for U.S. Senate from Georgia Jon Ossoff speaks after voting early in Atlanta on Tuesday, Dec. 22, 2020. For the second time in three years, Jon Ossoff is campaigning in overtime. The question is whether the 33-year-old Democrat can deliver a win in a crucial Jan. 5 runoff with Republican Sen. David Perdue. (AP Photo/John Bazemore)

ATLANTA (AP) — Though still chasing his first victory, Jon Ossoff is no stranger to the pressure of campaigning in overtime — this time for one of two crucial U.S. Senate seats that will determine control of the chamber.

The experience is like deja vu for the millennial Democrat from Atlanta, who shattered fundraising records and forced his way into a runoff for a U.S. House seat in 2017 that was closely watched as an early referendum on President Donald Trump.

Ossoff ran a formidable campaign even while being mocked by Republicans as a lightweight unqualified to occupy the seat once held by Republican Newt Gingrich. But he ultimately lost, dashing Democrats' hopes for a win in the early months of the Trump era. Those who felt let down didn't hold back their criticism: Ossoff's centrist message failed to inspire progressives. He didn't attack Republicans hard enough on key issues like health care. He fell short of giving people a clear reason to vote for him.

Just three years later, Ossoff has returned for another campaign cliffhanger. He faces Republican Sen. David Perdue on Jan. 5, when both of Georgia's GOP senators are on runoff ballots in elections that will decide control of the Senate.

At age 33, Ossoff will become the Senate's youngest member if elected. While he's sharpened his attacks and gained confidence in front of a microphone, he insists his biggest improvement has been building on the “volunteer army” of thousands who during his first run for office went door-to-door to turn out voters and fueled his campaign with small donations.

“The lesson that I learned is about the power of ordinary people, well organized and passionately committed to making change, to build power,” Ossoff said in an interview. “And the infrastructure that we built in that campaign has been of lasting value.”

Raised in a wealthy family in Atlanta, Ossoff was studying at Georgetown University in Washington when he landed an internship with U.S. Rep. John Lewis, the Georgia Democrat and civil rights hero. Lewis then referred him to Hank Johnson, an Atlanta-area attorney running for Congress in 2006.

Young Ossoff became the fourth member of Johnson's campaign staff, which also included the candidate and his wife. He was given free reign as the written voice of Johnson's campaign on its website and social media accounts. Johnson credits Ossoff with being “my left arm” as he won a Democratic primary upset over six-term Rep. Cynthia McKinney and ultimately took her seat in Congress.

“I invested a lot of authority in a kid, and the kid came through,” Johnson said. “He was a brilliant young man. And his heart matched his intellect. That’s what makes Jon sort of unique.”

Ossoff worked for five years on Johnson's Washington staff. In 2013, after Ossoff inherited money from his late grandfather, he invested in a small London-based film production company. Insight TWI finances investigative documentaries and sells them to broadcasters including the BBC. Ossoff is the company's CEO.

Despite ambitious politics and business, Ossoff still faces questions about whether he has the experience to be an effective senator.

He ended up trailing Perdue in the Nov. 3 election even after fellow Democrat Joe Biden won the state's presidential vote. Biden received nearly 100,000 more votes in Georgia than Ossoff.

Clint Murphy, a former Republican consultant in Georgia who now considers himself an independent, calls himself a “reluctant Ossoff supporter" who chose the candidate in part because he sees Perdue as being too inaccessible to voters.

“I felt like Ossoff just kind of came out of nowhere and raised a lot of money," Murphy said. "I don't know if raising a lot of money makes you qualified to do anything.”

Ossoff raised a whopping $30 million for his 2017 House race, which ended in a runoff loss to Republican Karen Handel. His critics on the left said the young Democrat's money couldn't make up for a lukewarm message. At the time, Ossoff called himself “an independent voice” who would "work with anyone in Washington" as Trump's election further polarized a divided electorate.

Three years later, Ossoff is doing more to court Black and liberal voters crucial to Democrats running statewide in Georgia, where an increase in nonwhite voters helped flip the state for Biden after more than two decades of backing Republicans. He supports a $15 minimum wage, adding a “public option” government health plan without ending private insurance, and a new voting rights act to restore federal oversight of state election laws.

And he's embraced support from national Democratic leaders, campaigning with President-elect Biden in Atlanta and joining former President Barack Obama for an online endorsement. His last campaign sought to avoid such associations — as many Georgia Democrats have done in the past — fearing they would hurt support among swing voters who viewed party leaders as too liberal.

A sharper edge on the debate stage in October earned Ossoff 15 million Twitter views of video showing the Democrat calling Perdue “a crook” who used the COVID-19 pandemic to protect his stock portfolio while downplaying the seriousness of the virus. Perdue insisted the allegations were false. He also ducked the only runoff debate, leaving Ossoff to face an empty podium.

Rahna Epting, executive director of the progressive group MoveON.org, said she definitely sees more fight in Ossoff, whom the group criticized after his last campaign for not being liberal or aggressive enough.

“In this rising climate of crises involving climate change and COVID and economic depression, we really see Ossoff meeting that moment,” Epting said.

Perdue has made a constant drumbeat of his exaggerated claim that Ossoff is pushing a “radical socialist agenda" and has mocked him as a “trust fund socialist.” The Republican has repeatedly said Ossoff supports the Green New Deal and defunding police departments, proposals Ossoff says he doesn't favor.

“I just don’t care about their attacks,” Ossoff said. "I don’t let it influence how I run, or let it reduce my passion advocating for policies that will help the people.”

Angelika Kausche met Ossoff when she joined his 2017 campaign as a volunteer motivated by hopes of blunting Trump's influence in Congress. A year later, she became a candidate herself and won a seat in Georgia's state legislature.

Kausche said Ossoff always impressed her with his intelligence and skilled outreach to young voters. And she sees an increase in his confidence. Yet even her high praise is colored with a tinge of uncertainty.

“I think Jon is really on a good trajectory,” Kausche said, “to maybe have a chance to win it in January.”