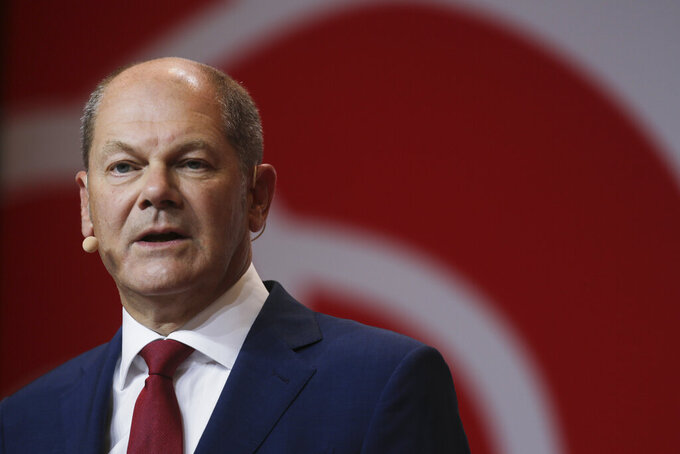 German Finance Minister Olaf Scholz attends a news conference in Berlin, Germany, Monday, Aug. 10, 2020. Olaf Scholz announces that he will run for the for the Social Democratic Party as chancellor candidate at next year's general elections in Germany.(AP Photo/Markus Schreiber)

Scholz, 62, who is considered to be on the right of the Social Democrats, has won widespread praise for his handling of the financial turmoil caused by the coronavirus pandemic.

After serving as the mayor of Hamburg during 2011-2018, Scholz joined Chancellor Angela Merkel's Cabinet two years ago in a government that pairs the Social Democrats in a “grand coalition” with her center-right Union bloc.

Merkel herself has said she won’t run for a fifth term in the 2021 election. It's not clear yet who her bloc, made up of the Christian Democratic Union and the Bavaria-only Christian Social Union, will field as a candidate for chancellor.

As finance minister, Scholz largely continued his conservative predecessor's frugal policies until the coronavirus pandemic forced the German government to loosen the purse strings in a bid to keep the economy afloat.

Norbert Walter-Borjans, the co-leader of the Social Democrats, said Scholz's role in tackling the economic impact of the crisis had earned him respect among voters.

Speaking to reporters in Berlin after his nomination, Scholz declared that he intends to lead the party to victory next year, despite its current slump in opinion polls. The Social Democrats came in second with 20.5% of the vote in the 2017 election, but have since seen their support decline to around 15% in recent opinion polls.

Along with a drop in its traditional working class support, the party has been overtaken on the left by the environmentalist Green Party, which has benefited from German voters' growing concern about climate change.

On Monday, Scholz named tackling climate change as one of the top priorities for the coming decade.

The Social Democrats are the first party to name a candidate for chancellor in next years' election.

Merkel's Christian Democrats will likely have to wait until December to select a new leaderswho would also stand a strong chance of becoming the Union bloc's candidate for the chancellorship.

Walter-Borjans said he hoped the early decision would allow the Social Democrats to concentrate on issues of political substance rather than a prolonged leadership debate.

While it was an open secret that the party has few candidates with the necessary gravitas and name-recognition to lead a successful election campaign, the lack of vocal opposition to Scholz's nomination took some political observers by surprise.

Asked about possible coalition options, Scholz wouldn't rule out a pact with the Greens and the ex-communist Left Party, provided their policies were acceptable. He downplayed the possibility of a further extension of the grand coalition, saying it had worked well but risked stifling political competition.

“We don't want a constant continuation of (Christian Democratic) governments with changing partners,” he added. “There should now be a Social Democratic government. And then we'll see, how we make that happen.”