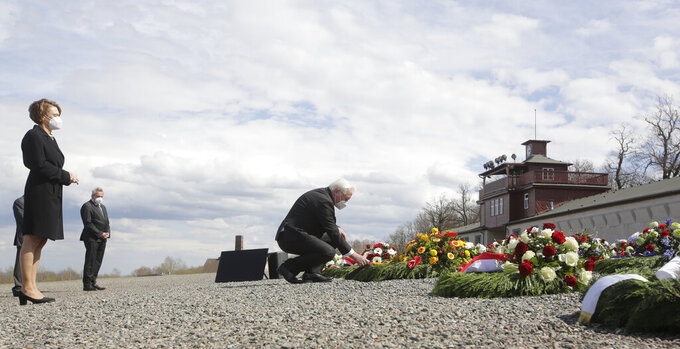 German President Frank-Walter Steinmeier, center, lays down a wreath during commemorations marking the 76th anniversary of the liberation of the Nazi concentration camp Buchenwald near Weimar, Germany, Sunday, April 11, 2021. On April 11, 1945 the US Army liberated the concentration camp Buchenwald. At left is Steinmeier's wife Elke Buendenbender. (AP Photo/Markus Schreiber)

WEIMAR, Germany (AP) — Germany’s president on Sunday marked the 76th anniversary of the liberation of the Buchenwald concentration camp by reminding his compatriots of the inconceivable atrocities the Nazis committed there during the Third Reich.

“Communists and democrats, homosexuals and so-called asocials were incarcerated at Buchenwald. Jews, Sinti and Roma were brought here and murdered,” President Frank-Walter Steinmeier said during a speech in the nearby German town of Weimar, 76 years to the day after U.S. forces liberated the camp.

“With its diversity of victims' groups, Buchenwald represents the entire barbarism of the Nazis, its aggressive nationalism to the outside, it's dictatorship on the inside, and a racist way of thinking,” Steinmeier said. “Buchenwald stands for racial fanaticism, torture, murder and elimination.”

Holocaust survivors and their families weren't allowed to gather for anniversary observances this year because of the coronavirus pandemic. Survivors from different parts of the world instead attended Sunday's memorial ceremony online. Large-scale commemorations for last year’s 75th anniversary were put on hold due to social distancing requirements.

The Buchenwald concentration camp was established in 1937. More than 56,000 of the 280,000 inmates held at Buchenwald and its satellite camps were killed by the Nazis or died as a result of hunger, illness or medical experiments before the camp's liberation on April 11, 1945.

“It was a dictatorship, a Nazi leadership that was responsible for the cruelest crimes and the genocide," Steinmeier said. “But it was human beings, Germans, who did this to other human beings.”

After his speech in Weimar, Steinmeier went to the site of the former concentration camp, where he laid a wreath with yellow and red flowers for the victims.