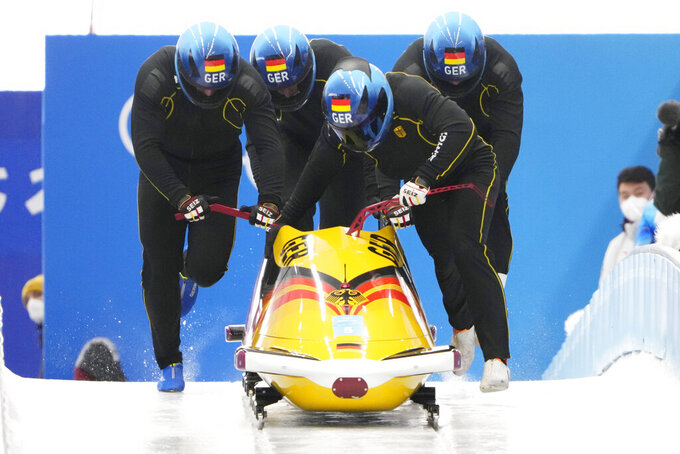 Francesco Friedrich of Germanyat and his team start during a 4-man bobsled training heat the 2022 Winter Olympics, Wednesday, Feb. 16, 2022, in the Yanqing district of Beijing. (AP Photo/Dmitri Lovetsky)

One, he may need a break.

Two, he thinks the ice needs a break as well.

Friedrich complained about the quality of the ice at the Yanqing Sliding Center after completing another day of four-man training Thursday, doing so after he posted one of the slowest times in the field — placing 25th out of 28 sleds in his final run, a massive dip from his usual spot near or at the top of the standings in most training and racing sessions.

“The track is totally worn out,” Friedrich told German reporters.

The three-time Olympic champion — a winner of two- and four-man golds at Pyeongchang in 2018, plus a two-man gold here in Beijing — is still the overwhelming favorite to win the four-man event that starts Saturday and ends Sunday, the final day of the Games.

But he sounded an alarm that isn’t uncommon toward the end of an Olympics, as ice tends to get beaten up. Not even counting unofficial training sessions that started a few days before the opening ceremony on Feb. 4, the world’s best bobsledders, skeleton athletes and luge athletes have made more than 2,400 trips down the Yanqing track in the last two weeks.

That's a lot. And four-man sleds are the biggest, heaviest and more damaging to the ice than any other. Four-man is traditionally the final sliding event of an Olympics, scheduled that way in part so sleeker and lighter sleds get the best possible ice for their competitions.

“There’s no substance left there,” Friedrich said. “You’re always being dragged into grooves, which has nothing to do with driving.”

Ice, particularly in four-man training and competitions, often deteriorates as it gets used. The rule of thumb is this: The earlier in a session you slide, the better your time will be. Track workers from around the world were brought in for the Olympics to ensure the ice is as good as possible, and they have teams working on the ice after every training and racing session, shaping and spritzing the top of the surface.

The highest-ranked sleds go first in most competitions, and Friedrich will have one of those coveted early start slots when the four-man event begins Saturday. But on Thursday, by luck — or bad luck, in this case — of the draw, he was starting after more than 20 sleds already had been down the ice, and that meant he wasn’t getting as pristine a surface as he usually enjoys.

“If you drive so far back (in the start order), it’s not fun,” Friedrich said.

Friedrich also revealed that he’s been tinkering with the setup in his sled, and whatever he changed for Thursday’s sessions — bobsledders rarely reveal specifics when talking about sled setups — didn’t work as he wanted, which also adversely affected his time.

Justin Kripps of Canada was the second sled down the hill in both training sessions, meaning he got about as good a sheet of ice as he could. He was the fastest in both runs.

Not surprisingly, his opinion of the ice quality differed a bit from Friedrich’s assessment.

“We had fresh ice right at the start of the day and had quite a clean run,” Kripps said. “It was good.”

A number of top women’s sliders skipped the final day of training, with most citing a need for rest before their last competition of the Beijing Games begins Friday. Among those who sat out: Olympic monobob champion and three-time women’s two-person bobsled medalist Kaillie Humphries of the U.S., who said days ago that she would opt out of the final training session.

“Some stuff is easier in the four-man, some stuff you need to be more precise sometimes, so it’s kind of like a double-edged sword," U.S. four-man pilot Frank DelDuca said. “There’s way more stability. You can put the sled right where you want it but if you make a mistake, the mistake sometimes is a little larger. But it’s cool. I’m excited for the race."