GM: Blue Jackets stay in the present but plan for the future 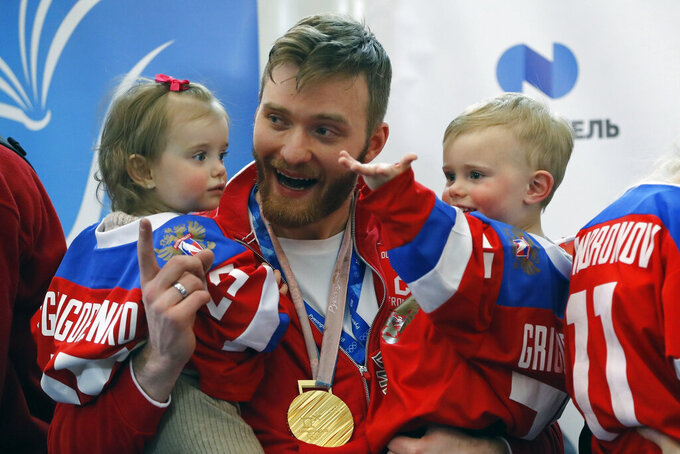 FILE - In this Feb. 26, 2018, file photo, Russian ice hockey player Mikhail Grigorenko holds his children after arriving at Sheremetyevo airport, outside Moscow, Russia from the Olympics in Pyeongchang, South Korea. Blue jackets general manager Jarmo Kekalainen announced the signing Monday, April 20, 2020, of forward Mikhail Grigorenko to a one-year contract for the 2020-21 season. A person with knowledge of the contract says it’s worth $1.2 million. The person spoke to The Associated Press on condition of anonymity because the team does not release contract terms.(AP Photo/Pavel Golovkin, File)

COLUMBUS, Ohio (AP) — Amid uncertainty about whether the 2019-20 season will continue, the Columbus Blue Jackets are looking ahead to next season.

General manager Jarmo Kekalainen announced the signing Monday of Russian forward Mikhail Grigorenko to a one-year contract for next season. A person with knowledge of the contract told The Associated Press it’s worth $1.2 million, speaking on condition of anonymity because the team does not release contract terms.

The deal was later rejected by the NHL, and the Blue Jackets tweeted that it was due to a ’misunderstanding with regard to the filing window, and that the contract will be resubmitted July 1.

Last week the team locked up goalie Joonas Korpisalo for two more years with a contract worth a reported $5.6 million.

“I think it's just business as usual for us,” Kekalainen insisted during a Monday conference call with reporters, while noting that the team is embroiled in discussions internally and with the NHL about if and how the current season will resume after the coronavirus threat wanes.

“We've talked to Grigorenko for two years, and now his contract's up and he's done playing for the year,” Kekalainen said. “It's business as usual, we're just not meeting at the office. We're doing it on FaceTime or Zoom on our computers, talking to each other by phone.”

The 25-year-old Grigorenko had 22 goals and 42 assists in 217 career NHL games with the Colorado Avalanche and Buffalo Sabres from 2012-17. He was the 12th overall pick by Buffalo in 2012 and can play all three forward positions.

The native of Khabarovsk, Russia, has spent the past three seasons with CSKA in the Kontinental Hockey League, with 46 goals and 70 assists in 147 games from 2017-20. Kekalainen said he's noted improvement in the player since he was in the NHL.

The two-year contract for Korpisalo will give the 25-year-old a chance to establish himself as the team's starter. Rookie backup Elvis Merzlikins also proved he is worthy of a starting job.

The team likely will try to re-sign Merzlikins, and conventional wisdom is that one of them will eventually be trade bait as Columbus seeks more offensive help for next year.

Korpisalo said he wants to be the guy.

“I've been working for many years, and I've got a good chance to make it,” he said Monday. "I think I’ve said I played OK. I always knew I had it in myself, and now signing a two-year contract, I’m really honored and it’s really a place I want to be. Just happy to stay in Columbus and try to make the best of myself.”

Korpisalo, who is at home in Finland, said he reckons it will take “a couple weeks” just to get players back together and start training again if the league comes up with a plan to finish the season.

Ideas floated include trying to finish the regular season at neutral sites with no fans or going right into an expanded playoff scenario. If the playoffs were to begin with 16 teams, the Blue Jackets would be edged out by percentage points, so naturally Kekalainen is advocating for an expanded playoff field.

“We have some ideas,” he said. “And obviously we want to be part of it. We were right there when play halted and paused."

If the season continues, most players who were injured would be ready to go, Kekalianen said, including star defenseman Seth Jones and forwards Oliver Bjorkstrand and Alexandre Texier.