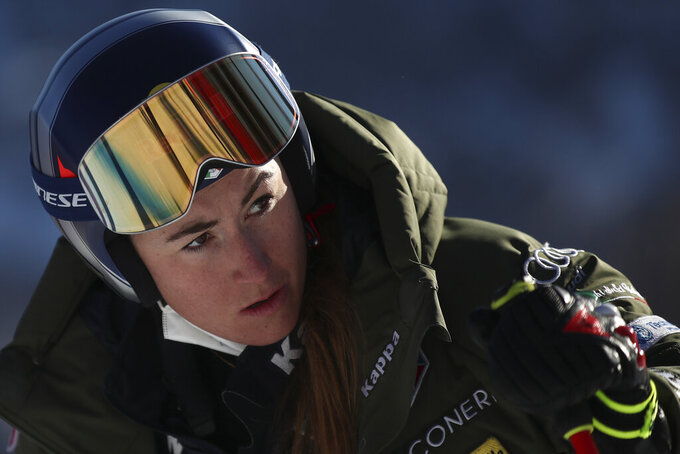 Sofia Goggia is going to need to recover in a hurry from a series of injuries following another crash on Sunday if she's going to be able to defend her Olympic downhill title next month.

Goggia would have been an overwhelming favorite for another gold — or two: she's also a force in super-G.

But she sprained her left knee, partially tore a cruciate ligament and suffered a “minor fracture” of the fibula bone in her leg — plus some tendon damage — when she did the splits at high speed then tumbled down the mountain during a World Cup super-G in Cortina d'Ampezzo, the Italian ski team said after a medical evaluation in Milan.

The crash came a day after Goggia won a downhill in Cortina with another wild run — a victory she labeled “one of the greatest wins” of her career.

Goggia will start physical rehab on Monday with the aim of returning in time for the downhill at the Beijing Olympics on Feb. 15.

She'll therefore likely miss the Olympic giant slalom on Feb. 7 and the super-G on Feb. 11. She'll need to enter at least one downhill training session on Feb. 12, 13 or 14 to compete in the downhill — but preferably all three on a new course that she's never been on before.

“I’m upset," Goggia said. “It’s not a break that I needed in such an important time of the season but I’m already going to start physical therapy in the coming hours, with the aim of trying to defend the Olympic title in the event that I love most.”

Goggia was nominated to carry Italy’s flag at the Feb. 4 opening ceremony of the Olympics but it's now unclear if she'll be able to travel to China by then.

The make-or-break Goggia also had a high-speed crash during a downhill at Altenmarkt-Zauchensee, Austria, last weekend. She escaped serious injury in that crash but was banged up to the point that she said she couldn’t walk on Monday.

Like the crash in Austria, Goggia’s latest fall occurred on a section of the Cortina course where shadows made visibility difficult.

Goggia was 0.07 seconds behind teammate Elena Curtoni — the race winner — at the second checkpoint when she made an error and had to check her skis to stay within the course.

Goggia then lost control as her skis rattled on the hard surface. She ended up doing the splits, was bumped into the air and landed on her back before tumbling down the course, through the next gate, eventually coming to a stop without hitting the safety nets.

After being tended to briefly, Goggia clicked back into her skis and made her way down to the finish under her own power. But she was visibly discouraged and hobbled away with the help of two team members.

Goggia wasn't the only skier who struggled on a difficult course-set that resulted in 22 of 57 racers not finishing.

“Sofia's crash today was a humbling reminder of how brutal this sport can be,” Shiffrin wrote on Instagram. "But seeing that there still is a chance for her to race DH (at)Olympics gives some hope.

“Watching her get up as soon as she was able and ski down after that is a testament to not only her strength and toughness, but her never-give-up mentality,” the American added.

With American downhiller Breezy Johnson also currently out injured after also crashing twice in two weeks, the status of the top two downhillers for the Olympics is in question.

Johnson placed second behind Goggia in the opening three downhills this season.

“We are crossing our fingers to have the (No.) 1 and (No.) 2 best Downhill skiers in the worlds racing at the Olympics,” Shiffrin said.

Goggia already missed her home world championships in Cortina last season after breaking a bone in her right knee. She has won six World Cup races this season — four in downhill and two in super-G.

While developing into the most dominant downhiller since Lindsey Vonn — Goggia won seven straight downhills that she entered over this season and last — the Italian has had numerous knee injuries throughout her career. She has torn the ACL in her right knee twice and once in her left knee — just to mention some of her more serious injuries.

Goggia's partially torn ligament was already operated on in 2013.