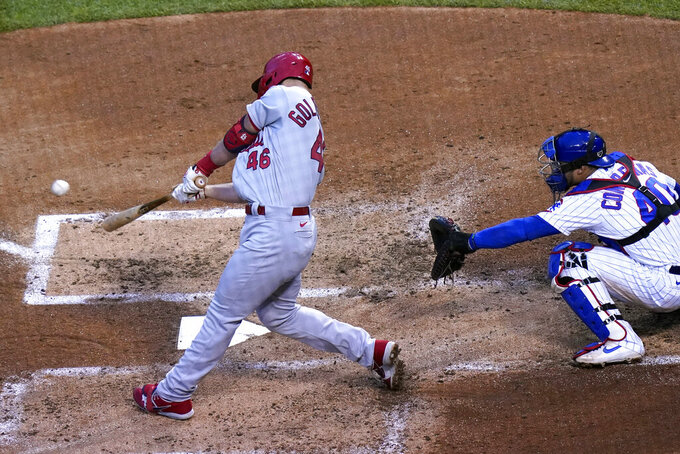 CHICAGO (AP) — Paul Goldschmidt's drive got up and just kept going, soaring out of a windy Wrigley Field on Sunday night.

When it landed, St. Louis was well on its way to another big win in Chicago.

Goldschmidt hit a three-run homer off a struggling Jon Lester, and the Cardinals gained ground in the NL Central race with a 7-3 victory over the Cubs.

St. Louis pulled within 1 1/2 games of Chicago with its third consecutive win over the division leaders, sweeping a doubleheader on Saturday after the Cubs won 4-1 in the series opener Friday night. The longtime rivals have one game left in their pandemic-shortened season series on Monday.

“We're always taking care of our business and we put our head down and we play regardless of where we are,” manager Mike Shildt said. “I think we've proven that, and that's a good trait for a group.”

“Just giving too many runs, too many hits, too many baserunners," Lester said. "Too many of everything.”

St. Louis went ahead to stay with four runs in the third. With one out and runners on first and second, Goldschmidt hit a massive drive to left that landed on Waveland Avenue for his fourth homer.

Tyler O'Neill singled with two out and scored on Rangel Ravelo's double, giving the Cardinals a 5-3 lead.

Paul DeJong, who had two hits and drove in a run, said St. Louis' lineup has been working well as a group.

“Top to bottom throwing up great at-bats. Everyone seems to be contributing,” he said.

Lester allowed six hits, struck out four and walked two, extending his winless stretch to five starts. The 36-year-old left-hander is 0-1 with a 9.26 ERA during the slump, yielding 40 hits in 23 1/3 innings.

“You guys have seen the linescores, there’s not much confidence behind that right there," Lester said. "The work we’re putting in on the side in between starts, just obviously isn’t translating into the starts.”

The Cardinals added two more in the sixth, taking a 7-3 lead on RBI singles by Kolten Wong and DeJong. Wong is batting .393 (11 for 28) in his last seven games.

The teams observed a pregame moment of silence in honor of Hall of Fame outfielder Lou Brock, who died Sunday at age 81. Brock began his career with Chicago, but he was traded to St. Louis and helped the Cardinals win three pennants and two World Series titles in the 1960s.

The Cubs brought up Matt Dermody from their alternate training site in South Bend, Indiana, and the left-hander worked a perfect ninth. Right-hander Tyson Miller was sent down.

Cardinals: Rookie LHP Kwang Hyun Kim (kidney) is back in St. Louis after spending time in a Chicago hospital with adominal soreness. “A little, as to be expected, tired, but not in a lot of discomfort or pain,” Shildt said. Kim is expected to be evaluated Monday “and we'll see what he can do, if anything, baseball-related tomorrow,” Shildt said. ... RHP Carlos Martínez remains on track to start Game 1 of St. Louis' doubleheader against Minnesota on Tuesday. Martínez is coming back after testing positive for the coronavirus.

Cubs: RF Jason Heyward departed after four innings because he was “not feeling well,” according to the team. Manager David Ross said Heyward was taken to a hospital “to get tests and precautionary reasons.” Ross said Heyward ”felt a little lightheaded after the first at-bat, and just not being able to really breathe.” ... LHP José Quintana (left lat inflammation) is feeling much better, according to Ross. Quintana was slated to begin a throwing program Sunday or Monday.