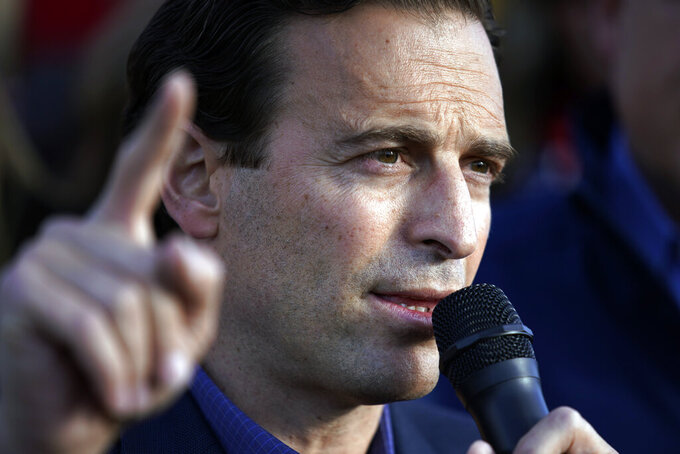 Florida Sen. Rick Scott, the chair of the National Republican Senate Committee, told The Associated Press that he has been in touch with Laxalt, whom he considers “a great candidate.”

“I think Adam will run,” Scott said in a recent interview. “He has not told me that he for sure will run. But I’ll actually be surprised if he doesn’t."

Laxalt, a close ally of former President Donald Trump's and part of a Nevada political dynasty, would give Republicans a boost in their quest to seize the Senate majority in next year's midterm elections. The GOP needs to flip just one seat nationally to take control of the Senate, which would break up the Democrats' hold of the White House and Congress.

Beyond Trump, Laxalt is well-connected to some of the Republican Party's most ambitious leaders, who have been drawn to the first-in-the-West presidential caucus state in recent years to attend his annual Basque Fundraiser. The headliners for this August's cookout in northern Nevada include 2024 presidential prospects, Arkansas Sen. Tom Cotton and Florida Gov. Ron DeSantis, who was Laxalt’s roommate in the Navy.

The national political landscape is far from set more than a year before the election, but Republicans see legitimate pickup opportunities in Arizona, Georgia, Nevada and New Hampshire, while Democrats are bullish about Pennsylvania, Wisconsin, North Carolina and Ohio.

President Joe Biden won the state by 2 percentage points in November. The Democrat overwhelmingly won Latinos, who make up a significant slice of the state's electorate, but Trump made inroads with those voters amid signs of frustration at coronavirus-related restrictions.

The 42-year-old Laxalt, who lost an election for Nevada governor in 2018, has acknowledged he’s having conversations about running for public office but has not issued any timeline for a decision. Laxalt did not immediately respond Monday to a message left with his political consultant seeking comment.

Republicans and Democrats have been eagerly awaiting Laxalt’s decision.

“If Washington Republicans are recruiting Adam Laxalt, they’re lining up behind a losing politician who always puts his own political interests first,” said David Bergstein, a spokesperson for the Democratic Senatorial Campaign Committee. “If he runs, Nevadans will reject him just like the last time he was on the ballot.”

The tide is expected to be more in favor of Republicans next year, with a Democrat in the White House and midterm voters typically swinging toward the opposition party.

Most recently, Laxalt served as a co-chair of Trump’s reelection campaign in Nevada. He spearheaded failed legal challenges to results, to stop the counting of mail ballots and lodge claims of voter fraud. Judges in every case dismissed the challenges, and the state’s Democratic attorney general blasted the efforts as an attempt to undermine confidence in the election.

While Cortez Masto is the first Latina elected to the U.S. Senate, Scott said that Republican candidates nationwide should benefit from a shift in Latino voters toward the GOP.

“If Republicans will show up and engage with the Hispanic community, then we will win the Hispanic vote," Scott said.

Cortez Masto has been laying the groundwork for her first reelection bid next year.

With the election 17 months away, she’s got $4.7 million banked in her campaign fundraising account. She has a national network of donors she can tap, thanks to longtime Nevada Sen. Harry Reid’s fundraising machine and her two years recently spent as the chair of Democratic Senatorial Campaign Committee.

Cortez Masto was elected in 2016, recruited by Reid to run for his seat when he retired. She was one of more than 10 women considered to be on Joe Biden’s short list for a potential running mate in 2020 before she withdrew her name from consideration.

Before her election, she served eight years as Nevada’s attorney general and was a federal prosecutor in Washington, D.C.

Laxalt is a son of former U.S. Sen. Pete Domenici of New Mexico and a grandson of former Nevada Gov. and U.S. Sen. Paul Laxalt. He is also a former lieutenant in the Navy and served as a Navy judge advocate general in Iraq.

His loss came in a year when midterm frustration with the Trump administration racked up Democratic victories up and down the ballot in Nevada.